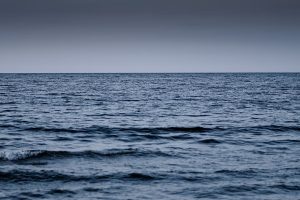 The oceans are a mysterious and merciless wasteland, filled with ghosts and spirits of ships of the past – the easiest way to understand them is to sail them yourself…

Harsh and salty water whips against your face, stinging your eyes. You inhale in a saline-filled breath, it’s sour and unforgiving. The ocean’s waves are lapping ferociously against the sides of your ship. You hear clamoring of your crew, distant yells, “Captain, we’re taking on water!”

You look towards the horizon, no land in sight. The realization sets in, this is your last day on Earth. You feel for your crew, their families, their wives, their children. A shattering crack breaks your focus on death, and you’re greeted by a swift sinking, saltwater engulfs you, you do your best to stay above water, but you cannot fight the swells.

Your vision fades, the water is warm now, and you sink into darkness, leaving behind your earthly life. You weren’t ready for this, you had so much more to accomplish. Your final moments are spent in a state of unrest. You’ve heard the saying, “go towards the light,” but there is no light to fall into. You come back up to the surface, your ship completely disappeared, your crew underwater, you don’t feel the need to breathe. The realization sets in… you’ve died. After all, a captain is always expected to go down with his ship.

Spirits and ghosts: Our Ghostly Waters

Earth’s oceans are a truly unforgiving place, consuming the lives of thousands of sailors, passengers, and captains over the years. Because of this, ghosts are as prevalent as fish in our waters. Happenings such as the world-famous Titanic, or the Octavius, where a captain and his crew were found frozen to death where they sat, additionally the Flying Dutchman, a ship cursed to sail the seas for all of eternity, make for truly haunted waters. One would have to assume not all of these spirits moved on when they perished. A death at sea is not only tragic but sudden, with unfinished business or unsolved mystery, ghosts of our oceans are cast adrift, lost on the waves of eternity.

We’re here to bring you a hauntingly nautical series, Spirits and Ghosts of the High Seas. We will take you across thousands of sea miles, to all seven continents, and through hundreds of years. Each story will be mixed with fact and legend of ghosts of the oceans, each more terrifying than the last. But first, let us give you a taste of what’s to come! You’ll read stories of known legends and myths that will spark your imagination and thirst for knowledge about the spirits of the seas.  Some tales will be previously untold or unknown to be added to your library of haunted history and ghosts.

Spirits and Ghosts: The Flying Dutchman

Everyone has heard the legend of the Flying Dutchman. It has inspired folklore, operas, musicals, and more since legend started around the 17th century. The story tells of how the doomed Dutchman and her crew were condemned to wander the world’s oceans for eternity, because of Captain Hendrick Van der Decken and his decision to sail into known fatal seas. Is this story nothing more than a fable of the seas, or is there some truth behind the Dutchman’s fate?

The ship was reportedly owned by the Dutch East India Company, these ships traveled between the East Indies and the Netherlands, transporting exotic goods such as silk, spices, and dye back to Dutch ports. On her last voyage in 1641, the Dutchman and her captain Van der Decken set out with normal conditions on their outward journey. However, their return voyage was filled with peril. Van der Decken was anxious to arrive in Amsterdam as soon as possible and decided to take a shortcut around the Cape of Good Hope, ironically.

As they rounded the Cape, a horrible storm could be seen brewing in the distance. The Dutchman’s crew begged their captain to turn back. But Van der Decken ignored his crew’s pleas, some say out of anger, others out of drunkenness, and sailed straight into the storm.

The crew mutinied, turning against their captain. Van der Decken killed the leader of these rebels and threw him overboard in cold blood. As he did this, he exclaimed that he would complete his journey around the Cape, even if it took him “until Doomsday.” The ship was later claimed by the seas, never to be found.

As early as the twentieth century, sailors have reported seeing the cursed ghost ship, with torn black sails. It is regarded as an omen of impending doom. The ghostly vessel has been spotted floating just above the waves, or even underneath them. The Flying Dutchman’s last sighting was in 1939 on the South African coast. Beachgoers reported seeing a hazy ship coming towards shore, but as it turned and set it sails, it vanished into thin air. The legends seem to be true, as the Dutchman has been spotted for over one hundred years, sailing aimlessly, lost on the ocean. If you’d like the read more in-depth about the Flying Dutchman, you can do so here.

Other spirits and Ghostly Vessels

While the legend of The Flying Dutchman is just the ‘tip of the iceberg’ into ships turned spirits, we have researched plenty of other shipwrecks and haunted islands to fill the end of your summer with ghostly intrigue. In this series, we will dive deep into stories of The Ourang Medan, where a captain and crew were found dead on board after a distress call, but with no suspected foul play. We will also tell you the tale of The Jenny, an 18th-century ship that became trapped in ice, with only a captain’s journal entry to tell of the horrors.

We will also visit a more recent mystery, The Kaz II. In 2007, this ghost yacht was found drifting near the Great Barrier Reef where a video camera and film found onboard contained no evidence of where her crew had gone. We’ll even venture into the legends surrounding  The Bermuda Triangle, where hundreds of ships and planes have gone astray. never to be seen again.

‘Vessels that traversed the Bermuda Triangle would end up one of two ways: being found abandoned, or more mysteriously, they would completely disappear. In December 1945, five Navy bombers took off to conduct practice bombing over the Triangle.

Their compasses started to malfunction and the lead plane, Flight 19, became severely disoriented. All five planes flew over the ocean aimlessly until they ran low on fuel and were forced to ditch their planes at sea. The exact same day, the rescue plane that came searching for Flight 19 and its 13-man crew also disappeared. After a week’s long search failing to turn up any evidence, a Navy report stated that it was “as if they had flown to Mars.”‘ -excerpt from our article ‘The Lost Souls of The Bermuda Triangle”

It seems as if the ocean has more to hide than we could even begin to imagine. It’s an alien world here on Earth, and it harbors some of the planet’s best-kept secrets. Our seas hold legend, tales of old, and spirits that never quite moved on from their watery graves.

Ghosts and Spirits of the High Seas

If you’re ready to be chilled to the bone this month, feel free to subscribe to our email list with the form at the bottom of our contact page to be the first to hear when new stories are published. You will also receive haunted news, discounts, and updated tour information when you subscribe!

Or, if you’d like to kick-start your ocean-themed paranormal reading, check out this story about Captain Blackbeard and his crew of merciless pirates!