The Lost Souls of The Bermuda Triangle 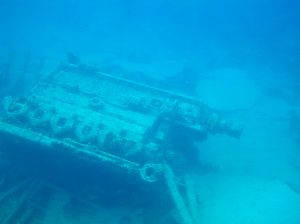 The Bermuda Triangle: A Legend Unsolved

The Bermuda Triangle remains one of our ocean’s most infamous and unsolved mysteries. Throughout the centuries researchers have attempted to figure out why the Triangle is as deadly as it is, but after decades of inquiries, searches, failed rescues, and disappearances, it remains one of the world’s unexplained phenomena. It’s in our innate human nature to search for answers or at least educated guesses for the unexplained.

Countless ships, planes, and people have mysteriously disappeared in the Triangle, causing years and years of speculation. Reasoning ranging from aliens, spirits, to the magnetic fields of Earth have been brought to the table.

The Bermuda Triangle or “Devil’s Triangle” is a section of the Atlantic Ocean with points located at Miami, the island of Bermuda, and Puerto Rico. Dozens of ships and airplanes have disappeared here under unexplained circumstances over the years, one example being when a squadron of U.S. Navy bombers became disoriented during their flight over the area, but their planes were never recovered. Many other boats and planes have also gone missing, and with a lack of radioed distress signals, one starts to question what could have caused their disappearances.

Reports of strange occurrences in the Bermuda Triangle have been reported as early as the voyage of Christopher Columbus. He had sailed through this infamous area on his first trip to the “New World,” and reported a “great flame of fire that crashed into the sea one night followed by a strange light appearing in the sky in the distance a few weeks later.” He had also written of erratic compass readings, which could have been because the Bermuda Triangle is one of the few places on Earth where true north and magnetic north line up.

The Bermuda Triangle has attracted the attention of famous playwrights, including the likes of William Shakespeare. In Shakespeare’s play, “The Tempest,” he tells of a legendary shipwreck that occurred in the Triangle. One of the more famous tragedies occurred in March of 1918, when the U.S.S Cyclops, an almost 600-foot-long cargo ship with over 300 men on board, sank somewhere near Barbados.

The Cyclops never sent out a distress signal, although they were equipped to do so. An extensive search ensued, with no wreckage or evidence ever recovered. President Woodrow Wilson later stated that “Only God and the sea know what happened to the great ship.” This disappearance was followed by the Cyclops’ sister ships vanishing in a similar style in 1941.

A Pattern of Mystery

After these disappearances, a pattern began to form. Vessels that traversed the Bermuda Triangle would end up one of two ways: being found abandoned, or more mysteriously, they would completely disappear. In December 1945, five Navy bombers took off to conduct practice bombing over the Triangle. Their compasses started to malfunction and the lead plane, Flight 19, became severely disoriented.

All five planes flew over the ocean aimlessly until they ran low on fuel and were forced to ditch their planes at sea. The exact same day, the rescue plane that came searching for Flight 19 and its 13-man crew also disappeared. After a week’s long search failing to turn up any evidence, a Navy report stated that it was “as if they had flown to Mars.”

We ask ourselves, what in the world is going on? If this is an area of strong magnetic pull, causing malfunctions in electronic equipment, why is physical evidence of wreckages of these aircraft and boats never recovered? There never fails to be mention about how they disappeared “without a trace.”

The ‘Mary Celeste’ – A Ship Forgotten

One of the lesser-known disappearances in the Triangle is that of the merchant brigantine Mary Celeste. She was discovered adrift and deserted near the Azores Islands on December 4th, 1872.

A Canadian ship by the name of Dei Gratia, which means ‘by the grace of God,” discovered the vessel in disheveled condition but seaworthy. All her crew’s personal belongings remained, and those that were on board were never heard from or seen again. The article above mentions that the crew of the Del Gratia found the Mary Celeste ‘watertight,’ and could not account for her ‘having been abandoned.’

They also found dresses on board, which led them to believe there were female passengers aboard The Mary Celeste, which was not typical at the time.

A Glimpse onto Her Decks

The Los Angeles Times retold the story of the Mary Celeste in June of 1883 with great detail according to a logbook entry found the day before the ship was discovered. The article stated, “Every sail was set, the tiller was lashed fast, not a rope was out of place… the fire was burning in the galley. Dinner was standing untasted and scarcely cold…”

Why is it that every disappearance occurring in this relatively small patch of the ocean remains completely unexplainable? If the Mary Celeste was found in seaworthy condition, why did the crew abandon ship? Did something so horrifying board with them that jumping overboard seemed like the less dangerous option?

An Otherworldly Underwater Base?

Over one thousand people have disappeared in the Bermuda Triangle, leaving experts stumped. However, alien enthusiasts believe they have found the answer and that extra-terrestrials are to blame for the tragedies. One theorist, Charles Bellitz, wrote in his book, The Bermuda Triangle that aliens are responsible for not only the disappearance of Flight 19 but countless others.

In the book, Bellitz wrote: “Lacking a logical and readily acceptable explanation, independent researchers concerned with the disappearances in the Bermuda Triangle have gone even further afield – some to explanations based on exceptions of natural law, others to suggestions of inter-dimensional changeover through a passageway equivalent to a ‘hole in the sky’ (which aircraft can enter but not leave), others believe the disappearances are engineered by entities from inner or outer space.”

UFOs of the Triangle’s Past

Even Christopher Columbus himself reported in a logbook an unidentified flying object in the skies over the Triangle all the way back in the days of discovery. His journal entry on October 11th, 1492 read: “The land was first seen by a sailor called Rodrigo de Triana, although the Admiral at ten o’clock that evening standing on the quarter-deck saw a light, so small a body that he could not affirm it to be land; calling to Pero Gutierrez, groom of the King’s wardrobe, he told him he saw a light, and bid him look that way, which he did and saw it.

He did the same to Rodrigo Sanchez of Segovia, whom the King and Queen had sent with the squadron as comptroller, but he was unable to see it from his situation. The Admiral again perceived it once or twice, appearing like the light of a wax candle moving up and down, which some thought an indication of land. But the Admiral held it for certain that land was not near…”

What did sailor Rodrigo de Triana see that night? If not land or another sailing ship, what could have been causing such a light in the midst of a vast ink-black sea?

Since many of those that have traveled the Bermuda Triangle do not stick around to tell the tale, any paranormal sightings go untold. We can only get glimpses into what lurks in the Triangle from those that are lucky enough to survive it. Aliens, ghost ships filled with pirates, it seems as if the only way to understand the Bermuda Triangle is to travel it. But who knows if you’d return to tell the tale?