Back in the early 1700s, ruthless scoundrels known as pirates ruled the ocean in an era known as, “The Golden Age of Piracy.” Pirates struck fear in the hearts of their enemies and many tradesmen were afraid to sail on the ocean. During this time, Virginia was the second most important British colony on the American mainland, and pirates were no strangers to this territory.

Pirating connections in Williamsburg, Virginia date back to 1693, when pirates would wait for trade ships to pass through to rob them of whatever they were carrying. The most feared and respected pirate of this time was Blackbeard.

Not only did Blackbeard make Virginia a regular stomping ground, but the last of his crew were tried, found guilty, and hanged in Williamsburg, Virginia. People have said throughout the centuries that these pirates still haunt the site of their death. Ghosts are scary enough, but can you imagine encountering ghosts that were once ruthless pirates?

“…Blackbeard in battle array was an awesome sight and, to sailors of the day, as feared as the devil himself…”

Blackbeard became captain of a large fleet during the height of piracy, and when he died, piracy died with him. Described as the embodiment of pure evil, he struck fear in the hearts of many.

Blackbeard’s real name was Edward Teach, and not much is known about his early life. Most historians agree, however, that he was born in Bristol, England around 1680. He began his career at sea at a young age when he set sail for Jamaica as a merchant seaman in the early eighteenth-century. His taste for crime came during Queen Anne’s War when he served as a privateer in Kingston, Jamaica, preying on French ships.

He eventually settled in the Bahamas, where the notorious pirate Captain Benjamin Hornigold resided. Shortly after the government revoked the privateer’s license, around 1716, Teach joined forces with Hornigold. Teach was strong,courageous, and had a devil-may-care attitude that Hornigold grew to respect and admire. Hornigold took him under his wing and taught him everything he knew about taking ships. Teach was eventually placed as commander of a sloop (sailing boat) that he and Hornigold had captured, known as the Ranger. 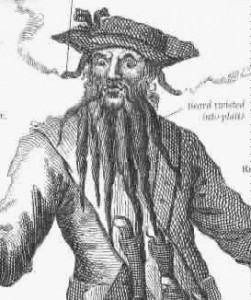 Hornigold was overthrown by his crew in November 1717. They then elected Teach as their new Captain, and Blackbeard, history’s most notorious pirate, was born.

After obtaining these ships, Blackbeard’s reputation began to develop. This is especially true in areas along the shores of North Carolina and Virginia. Blackbeard spent much of his time in these territories beginning in March 1718 when he became tired of the Caribbean and left for North America. When Blackbeard arrived in Charleston, in May of that same year, he had nearly seven hundred men under his command. This is because he had stopped nearly every ship on its way to Charleston and looted them all.

Teach’s appearance is what gave him his nickname. He had a very long, coal-black beard that he tied into small pigtails during battle. The pigtails were held together with colored ribbons that he used to light the matches that were stored underneath his hat. He was a tall, muscular, and very large man, which attributed to his dreadful appearance and intimidated his enemies. He always dressed in black, with pistols, daggers, and a cutlass on his belt. Across his chest was a bandolier which he used to carry six ready-to-fire pistols. He was, “the embodiment of impregnable wickedness, of reckless daring, a nightmarish villain so lacking in any human kindness that no crime was above him…the living picture of an ogre who roamed the seas and withered all before him with his very presence.” He developed a reputation for being the cruelest pirate on the seven seas and was not only feared by his enemies, but by his own crew and officers as well. 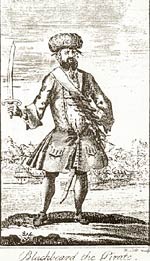 This reputation was further developed through Blackbeard’s passion for fighting. His unmatched sword skills prompted people to say that he could cut a man in half with a single blow. The evil fame he acquired resulted in quick surrender with minimal resistance.

In June, England offered pirates a pardon, forcing Blackbeard and his crew to retire. Blackbeard bought a house in Bath, North Carolina and married a woman named Mary Ormond (unbeknownst to her, she was one of his still living ten wives; there were fourteen in all). He became very close with the Governor, John Holloway, and his house became a popular place for the members of high society to gather. He won them over with plentiful gifts of rum and sugar.

However, a short time after he settled in Bath, Blackbeard, and his crew became restless and returned to pirating. Many people believed that the governor assisted Blackbeard with this endeavor. The two seemed to have formed a friendship and the people of North Carolina feared their Governor was deeply corrupt. In an act of desperation, they turned to the Governor of Virginia, Alexander Spotswood, for help with their problem. The downfall of Blackbeard and his crew was near.

The Battle to End it All

Governor Spotswood sent troops by sea, led by Lieutenant Robert Maynard, to capture Blackbeard. On November 21st, 1718, Maynard noticed the disabled ship in the open water and gave the order for an attack. They hid below deck to lure the pirates to their ship, giving them the upper hand. When Blackbeard and his crew boarded, they were immediately surrounded. The battle began.

In the end, Maynard and his men were victorious, and the legendary Blackbeard met his end. He went out swinging, however; he was stabbed 20 times and shot 5 times during the battle (25 hits) before his eventual death. An excerpt from Pirates on the Chesapeake by Donald Shomette describes Blackbeard as being,

“…struck time after time, spewing blood and roaring imprecations as he stood his ground and fought with a great fury. One mighty arm swung his cutlass like a deadly windmill while the other fired shot after shot from the brace of pistons in his bandolier.” 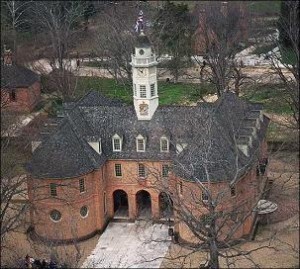 Maynard and his crew defeated Blackbeard on the morning of November 22, 1718. They cut off his head and threw his body into the ocean. They placed his head on a high pole at the mouth of Hampton River (known today as Blackbeard’s Point) as a way to dissuade anyone considering piracy. After a while, locals took Blackbeard’s skull down and fashioned into a drinking cup that was kept at the Raleigh Tavern in Williamsburg, Virginia.

Blackbeard died in North Carolina, but his crew, who surrendered very shortly after his death, awaited trial in Virginia and “The Golden Age of Piracy,” was over.

After the battle in North Carolina, 15 or 16 of Blackbeard’s crew members survived and were brought to Virginia to await trial. They were kept in Williamsburg’s famous and primary jail, simply called The Public Gaol (pronounced jail).

Built in 1704, the jail was very small because it was only supposed to house prisoners temporarily, however, this wasn’t the case. Because of the small size of the prison, this lead to horrible living conditions (especially true in the Revolutionary War). The prisoners, which included runaway slaves, murderers, cutthroats, pirates, marauding Indians, political and debtor prisoners, and even the criminally insane, only had piles of straw to sleep on. The jail smelled and was infested with rodents, cockroaches, and lice. The food was horrible and a disease known as Gaol fever (typhus) wasn’t uncommon. There was no glass on the windows, so prisoners, chained in heavy leg irons and handcuffs, weren’t protected from the elements. The poor living conditions and overcrowding caused more inmates died of starvation and disease than at the gallows.

The trial for Blackbeard’s crew began on March 19, 1719, at the Capitol building. Virginians sentenced all but two to death; Samuel Odell was acquitted because he had only been on Blackbeard’s ship one day and Israel Hands (Blackbeard’s chief aide) was pardoned. He died a homeless man on the streets of London years later.

In late March 1719, the remaining pirates left the Public Gaol and walked down the streets of Williamsburg. They rode on top of their own coffins (custom at the time) from the jail. They traveled down present day Nicholson Street, which was referred to as Gallows Road, and were hanged along Capitol Hill Road; known today as Capital Landing Road. Their bodies were hanged in cages along the entrance to the city to deter would be pirates and inspire confidence in the government’s ability to deliver justice and order. The death of Blackbeard and his crew marked the end of “The Golden Age of Piracy.”

It’s not uncommon to hear strange sounds coming from where Blackbeard’s crew and many other people were hanged. Hanging was terrifying back then for the guilty parties. A cart drove them to the gallows and they had to sit on their own coffins.

Hangings were public events, so when they reached their destination, there was a crowd there waiting for them who would shout and jeer at them. The cart would stop right beneath the gallows, the man/woman would say their last words, and then the cart would move immediately afterward. To make matters worse, people didn’t always die right away. Sometimes it took a little while. 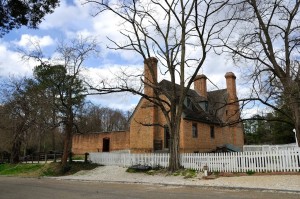 Sounds coming from what locals call the Wagon of Death have been heard on Nicholson Street, Hangman’s Road, also known as Gallows Road, which is present day Capital Landing Road. People have heard a horse and wagon as well as cheering from a crowd. No one has physically seen the wagon, but people swear that they’ve heard it and that it exists.

There have also been sounds heard coming from the old Public Gaol (use of this building stopped in 1910 and restoration began in 1936). The sounds of voices and thumping of heavy shoes come from a deserted room on the second floor, as well as moaning and whispers late at night. It should also be mentioned that the jail’s location is along Nicholson Street, which is one of the locations where the Wagon of Death has been heard.

Blackbeard was a ruthless, cruel, but also brilliant and fearless, man. His crew and his enemies respected and feared him. In fact, the crew respected him so much that they lost their lives for him; because of this, Blackbeard’s crew and Williamsburg, Virginia are connected until the end of time.

Sounds have been heard coming from the jail and from where the crew was hanged along Capital Landing Road in Williamsburg. As for Blackbeard, there haven’t been any reports of seeing or hearing his ghost in North Carolina. This, however, is probably a good thing. Said to have been the embodiment of evil when he was alive, one wonders what it would be like to meet his ghost.