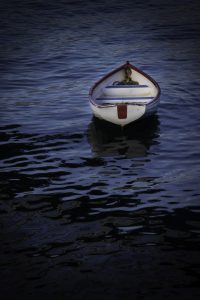 Below are two tales of sailing gone wrong – tragic stories of lives ended, one suddenly, another over the course of months. Ghost ships of days of old and new, read on to discover just what destruction and mystery our oceans are capable of.

The Jenny – A Frozen Fate

‘The Jenny’ was a schooner boat, which is a vessel with two or more masts, otherwise known as a “tall ship.” Although you may not have heard of her, Jenny and her fate have created a truly mysterious legend. In the Drake Passage, which is a body of water between Chile and the South Shetland Islands of Antarctica, The Jenny was found frozen inside of an ice barrier. Discovered in 1840, it had been almost twenty years since it first disappeared in 1823.

One of the most haunting aspects of The Jenny’s story was the last entry in a logbook which read, “May 4th, 1823. No food for 71 days. I am the only one left alive.” It was later confirmed that The Jenny’s captain had written the message. When The Jenny was discovered by a whaling boat named Hope, ironically, the captain was found still sitting in his chair, with his pen frozen in hand.

An article in the German Geographical magazine, Globus, states that the crew of the Hope believed that The Jenny was caught in an ice wall and remained there, hidden in mystery until the ice broke open. The article also stated that “The crew of the Hope sighted a battered ship before they realized that it was a ghost ship. Although it was battered, it appeared to be manned… in fact, seven men were even standing at attention on the main deck.” As the Hope slowly approached The Jenny, however, it became obvious that these men were not watching dutifully, but frozen solid at their posts.

First Man to Board

Captain Brighton, of the Hope, was the first to board and investigate The Jenny. He came across each crew member, frozen in time. Once he made it below deck, he came across The Jenny’s captain, eerily frozen, writing his final journal entry.

Some reports do state that the crew and captain of the Hope buried all deceased at sea, including the captain’s dog and wife. Other reports state that they left them as they were, unwilling to disturb the bodies. Whatever the case, one can imagine the terror and sadness that engulfed the crew of The Jenny, as they realized they would never be going home, but instead, their fate was with the icy Antarctic sea.

Kaz II, or ‘The Ghost Yacht’ as it has been called, was a 9.8-meter catamaran which was found drifting just over 100 miles off the North-Eastern coast of Australia on the 20th of April, 2007. The Kaz II had a three-man crew, all of whom were residents of Perth, Australia: Derek Batten, and brothers James and Peter Dunstead.

According to the Australian Maritime Safety Authority, Kaz II departed from Arlie Beach on April 15th, 2007. They were headed towards Queensland, on the first leg of a journey that would take them around the Western Coast of the continent. The first indication of an issue was when a helicopter spotted Kaz II drifting in the Great Barrier Reef on April 20th. The helicopter pilot assumed that the crew may be in distress and in need of assistance, so in turn, he sent out a signal to maritime authorities.  When authorities finally caught up with the boat and boarded, they found all three men missing under circumstances they described as being “strange.”

“What they found was a bit strange in that everything was normal; there was just no sign of the crew.” –Jon Hall, Queensland’s Emergency Management Office

Officials released a statement that day, revealing that the boat wasn’t damaged or out of service, and the lower deck was laid out as if the crew were still on board. There was a laptop computer set up and turned on, plates and silverware were set on the table, and the boat’s engine was even still running. Authorities had checked and confirmed that the Kaz II’s emergency systems were in working order, and even the lifejacket stock remained on board. A videotape was also recovered, showing the men’s final moments on board. It was a home-movie style tape of the men enjoying their day on the open ocean. Peter Tunstead was seen fishing, Derek Batten was at the helm, and James Dunstead was taping, panning the camera to give a 360-degree view of the waters. Everything seemed peaceful and copacetic, a mystery indeed.

Into Thin Air – Where Did The Jenny And Kaz II Go?

Searches started on the 18th of April, and after many fruitless hours, were eventually called off completely on April 25th. There was no sign of the three men anywhere in the ocean. The disappearance was strange as Batten’s wife recalled how thorough her husband was with safety, and the need for planning. The boat was even investigated for signs of foul play, but again, nothing out of the ordinary was found. It’s almost as if the men disappeared mysteriously into thin air.

The Coroner’s Report – A Final Explanation for the Jenny and Kaz II?

The state coroner admitted in his official report that “he cannot be so definitive about the circumstances in which the deaths occurred…” However, based on eyewitness accounts, the video found on board, and the state of the yacht in which it was found, his report proposes the following scenario as an explanation – “On Sunday, 15 April 2007, at 10:05 A.M., the Kaz II was sailing near George Point. Up to that moment, everything was going as planned but, in the following hour, their situation changed dramatically. The men hauled in the white rope that was trailing behind the boat and bundled it up on the foredeck, possibly to dry, next to the locker it was normally kept in. For unknown reasons, James Tunstead then took off his T-shirt and glasses and placed them on the backseat. The report says that since the men’s fishing lure was found entangled in the ship’s port side rudder, an obvious explanation would be that one of them tried to free the lure and fell overboard while doing so. Standing on the boat’s ‘sugar scoop’ platform (a platform at the back of the ship close to the waterline) while the boat is moving is perilous and falling in the water is easy, but getting back aboard is almost impossible. One of the other men then came to the rescue of his brother, while Batten, still on board, started the motor and realized he had to drop the sails before he could go back for his friends. As he left the helm to drop the sails, a deviation of the ship’s course or wind direction could have easily caused a jibe, swinging the boom across the deck and knocking Batten overboard. This could even have happened before Batten was able to untie and throw out the life ring to his friends. A blue coffee mug found near the life ring may support this. Since the boat was traveling before the wind and at a speed of 15 knots, or 17 mph, it would be out of reach of the men within seconds. The report then states: “From that point, the end would have been swift. None of them were good swimmers, the seas were choppy; the men would have quickly become exhausted and sunk beneath the waves.”

Even the most seasoned sailors can become victim to the relentless ocean. These two stories tell of random happenstance and the love of sailing gone awry; they are a reminder that the ocean is not a toy to be played with. Some would say that the ocean is just a large graveyard, and with its natural mystery, the ghosts of those who passed there never leave.  For a head start on our ghostly and nautical series, we invite you to visit Spirits and Ghosts of the High Seas.