In 1688 William Byrd I bought 1,200 acres in Charles City, VA from Richard Bland for 300 pounds, 10,000 lbs of tobacco, and a cask. Located 23 miles from the historical colony of Williamsburg, the plantation house and grounds are beautiful to this day.

Around 1750, William Byrd’s grandson, William Byrd III, built the beautiful Georgian-style Westover mansion for his family on the plantation. Westover is known for its secret passages used at one time to escape from Indians, its succulent gardens, and architectural details.

The mansion has at least one permanent resident, the ghost of Evelyn Byrd, who died on the family property at a young age. Many say she died of a broken heart.

The story of Evelyn Byrd

The Byrd family was prominent in Virginia with military and political ties and had one of Virginia’s largest and most lucrative tobacco plantations along the James River.

Born in 1707, Evelyn Byrd was the eldest daughter of William Byrd II and his first wife, Lucy Parke. Evelyn’s mother died when she was 9, and she was raised primarily by her stepmother.  Her stepmother instilled in her kindness and love and her duties as mistress of the property.

She was an intelligent but spoiled child. However, in her young adult years, she was known as loving and compassionate with the will to care for others. Evelyn took her duties seriously and personally, so much that she carried them beyond the grave.

When Evelyn was 10, she was sent away to boarding school in London, returning home to the Westover Plantation during summer breaks. Evelyn loved Westover, taking a particular fondness for the gardens where she was roaming in her first appearance after her death.

A tragic love lost for Evelyn

At 18, Evelyn presented to the Queen of England, at which time she met and fell deeply in love with a man whom her father highly disapproved. He may have come from bad faith, had a character of weakness, or most commonly a gold-digger. William Byrd II saw right through the man and brought Evelyn home to Virginia.

Evelyn returned to Virginia, heartbroken, and vowed never to marry if she couldn’t be with her one true love. Instead, she became the best and kindest big sister to Wilhelmina, her step-brother William Byrd III, and her step-sisters. She tended to the household needs and helped take care of her siblings while broken-hearted.

Sadly, at age 30, Evelyn passed away, most likely from an illness like her mother; however, many believe it was from a broken heart. She left the earthly realm but has kept a presence around Westover estate in her afterlife.

The ghost of Evelyn Byrd

When Evelyn was a young girl, she and her best friend Anne Harrison had an agreement that when the first one of them died, they would come back to visit the other in a friendly manner. A year after Evelyn’s death, she followed through with the promise. Anne saw her roaming the gardens at Westover. For the past 250 plus years, Evelyn has made her appearance to guests, workers, and the grounds and house owners.

Another sighting was by a young guest staying in a room on the third floor. She awoke one night to see a woman in a green velvet gown trimmed in lace with corkscrew curls kneeled at the foot of her bed. When she turned to search for her roommate and looked back, the woman was gone. The girl said she was not frightened, however, and rolled over to go back to sleep.

A maid once saw a young woman in the kitchen wearing a long flowing white gown. By the time the maid could decide who the woman might be, she was gone. 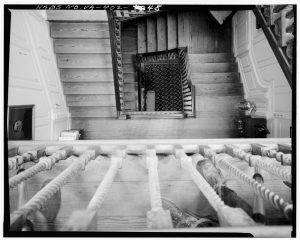 In one instance, a butler stepped aside to let a lady passage under the first-floor stairs. He thought the lady was the woman of the house, but he spotted her out the window in the yard. When the butler got to the first floor to search for the woman, no one was there.

Evelyn’s love for Westover in the afterlife

Evelyn likes to appear as a solid person, so she doesn’t frighten anyone. She is often seen in the gardens as well as down by the lake. Her attire is either a long white gown or a long green dress, but she always smiles and carries a kind aura.

She’s known to tend to the rooms of guests. Maids have seen her in the pantry, perhaps overseeing the next meal. But with every occurrence, Evelyn appears in a kind manner, never frightening those who see her. She does not, however, appear in any photos or recordings by paranormal investigators.

One gentleman touring the property saw a woman he believed to be an employee dressed in costume. When he snapped a picture, the figure disappeared, and there was no one in the photo.

The Ghost of William Byrd III

William Byrd III was Evelyn’s half-brother who was so fond of his sister he requested in his will to be buried next to her. However, Byrd lived a life dictated by his gambling addiction and the debt that he owed from such.

When William married Elizabeth Hill Carter in 1748, they lived at Westover until he built Belvidere Mansion on a bluff overlooking the James River known today as Oregon Hill. His debt became more than he could handle, forcing him to sell the mansion later on down the road. In the meantime, Byrd disowned his wife and volunteered his service in the military. He left his wife and their five children alone at Belvidere. Byrd never saw his wife again. Sadly, Evelyn died in 1760 from a tragic accident. However, many believe it was an intentional act by her mother-in-law Maria.

Byrd remarried Mary Willing and father ten more children. They lived at the Westover Plantation house, where Byrd ultimately ended his own life in 1777 at the age of 49. Sadly, he was found sitting in his favorite chair in his bedroom. There have been reports over the years that his ghost appears around midnight, slumped over his chair. It is not sure if he was buried next to his sister Evelyn as he had requested.

The Ghost of Elizabeth Byrd

Elizabeth Byrd was the first wife of William Byrd III. When William ended their tumultuous marriage essentially by leaving to fight in the war, Elizabeth tried desperately to get her husband home. She wrote letters to him that declared her love for him and her loneliness at Belvidere, pleading with him to return. Her letters went unanswered.

Although Evelyn Byrd’s stepmother Maria Taylor Byrd was kind and loving to her, it was another story for Elizabeth’s relationship with her mother-in-law. There are reports of great conflict between the two women, and Maria told her daughter-in-law of many women her son had affairs with and that there were letters as proof.

When Elizabeth was at Westover, Maria told her that William kept the letters from his lovers in a top drawer of a large bureau. Elizabeth went to the bureau and opened two lower drawers to stand on because she could not reach the top drawer. When she stood on the opened drawers, the bureau fell over on top of her crushing her to death. Elizabeth’s cries for help can still be heard throughout the halls of Westover, sadly to no avail.

There are also beliefs that Elizabeth may have committed suicide. Whether intentional or accidental, the premature death of the mother of 5 resulted from the indiscretions of her unfaithful, gambling husband and possibly, his mother.

Last of the Westover Plantation Ghosts

Other stories of ghosts at Westover Plantation are the sounds of a woman crying, unlike the cries for help by the spirit believed to be Elizabeth Byrd. Some wonder if this is perhaps guilt-ridden Maria Taylor Byrd, who may have ultimately caused the reason for her daughter-in-law’s death.

The haunted history of Colonial Virginia is abundant. Check out our other haunted blogs and decide for yourself what is to believe and what is folklore.

Book one of our popular ghost tours in person or a virtual ghost tour from the comfort of your own home!