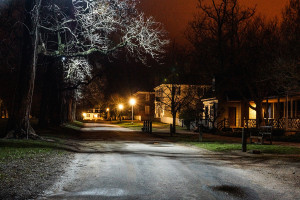 Colonial Williamsburg is a 301-acre living “museum” of sorts, with buildings and grave sites dating back to the 1600s; incredible American history spanning the 17th – 19th centuries. The buildings and homes there include businesses and private residences, as well as a church, jail, taverns and more. When we were planning our recent trip to Virginia, we knew that Colonial Williamsburg would be on the bucket list of whistle stops; naturally, we turned our attention to what takes place there after dark. Certainly, a locale such as Colonial Williamsburg must have multiple types of… spirits for visitors to learn about and enjoy!

Very quickly, we found that Colonial Williamsburg is the home of several companies operating ghost tours. While some dress their guides in period clothing, and rely on theatrics and props such as lit lanterns to enhance the experience, we opted to go with a company called Colonial Ghosts Williamsburg. Colonial Ghosts Williamsburg grabbed our attention the most when researching our options – we liked the types of tours they offer, and their straight-forward ghost walk approach, educating guests about the past as well as the more recent hauntings of the area. The operation was named one of America’s Top 10 Ghost Tours in 2014 by U.S. City Traveler, and was the recipient of 2015’s Best of Williamsburg Award. 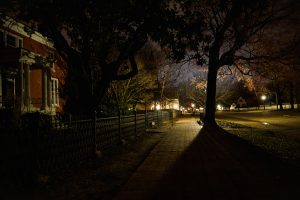 Colonial Williamsburg after dark is fairly creepy on its own, without ghost stories. No offense to residents – but damn! As soon as the sun sets, just a short walk off of the main street where the trendy shops and modern bistros are, the trees loom large with their skeletal branches and the colonial buildings that line the age-old streets seem to take on personas of their own. The neighborhood is eerie quiet, and aside from the very rare vehicle driving by or the foot traffic of gawking tourists, Colonial Williamsburg is very definitely one of the most spooky – yet peaceful – locations I have ever visited. However – when you add creepy ghost stories and documented history of grizzly occurrences into the mix, you have yourself one heck of a chilling night in store!

Our tour began promptly at 8pm outside of the Kimball Theatre, a structure that has been hosting plays, musical performances and everything in between since 1933. We were met by our tour guide. The tour we opted for was the Extended Tour (only because the Ultimate Williamsburg Ghost Tour wasn’t offered the night we had to visit), which was a 2-hour walking tour, which covered a mile and a half of Colonial Williamsburg, featuring many fascinating – and genuinely spooky – locations in the area. Literally as our tour started, thunder began to flicker above and all around us, and thunder rolled ominously, echoing off the brick facades along the street… are you freaking kidding me!? While it did rain a few times during the tour, our guide proceeded, undaunted by the storm. Most everyone came prepared with umbrellas, and popped them open at the first sign of rain; in the end, the weather was only a minor inconvenience – we were all there for ghost stories, and they absolutely delivered!

I won’t go into any of the details – I wouldn’t want to spoil any of this for fellow fans. I will say, that some of the locations we visited/saw along the way included the William & Mary college grounds, Peyton Randolph House, Bruton Parish Church, Governor’s Palace, and the Public Gaol (jail), to name a few. We have some images of these spots to share with you, but for the stories or more research, you’ll either need to Google the information or take the tour yourself – and I assure you, the latter is much more fun!

This isn’t something that we found to be terribly child-friendly. While the subject matter is not necessarily too graphic (although some of the tales are definitely gruesome and it all deals with death – it is a ghost tour, after all), there is a lot of walking involved, and the content isn’t dumbed-down for younger guests to understand or appreciate; in all honesty, anyone younger than a pre-teen would likely find this a very long, boring night out. Our suggestion is to leave the little kids at home – or with someone not taking the tour; you’ll enjoy it more, and the rest of the adults on the tour definitely will appreciate it.

The Colonial Ghosts team doesn’t use costumes or theatrical delivery to tell their ghost stories. They wear their Colonial Ghosts Williamsburg T-shirts and are very cool and down-to-earth with their delivery of the hauntings and events surrounding each location. We like that. For something that feels – and probably is – super touristy by nature, the laid-back demeanor of this team just feels more comfortable. We didn’t feel that we were being treated like tourists, if that makes sense.

One of the cool moments during the tour was seeing fireflies while on the William & Mary campus – we don’t have those things here in Southern California! It was a surreal moment when we realized we were surroundedby them; I even broke away from the tour while broadcasting a Periscope video so that people could see them! 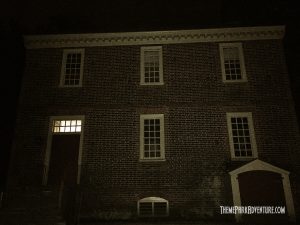 And so, with thunder rolling and lightning flashing, they led our group for 90 minutes around Colonial Williamsburg, pointing out spiritual hot spots, and telling us spooky facts and stories related to each from different time periods. Once the main part of the ghost tour continued, we stayed with him along with another couple for the “Extended” portion of the tour. The storm kicked into higher gear, and as we walked further into the guts of Colonial Williamsburg with very little light to illuminate our path, the wind rustled the leaves in the trees and the whole atmosphere was very ominous and surreal. Making things even creepier were the folks dressed in period garb, looking through the windows of their closed taverns in the darkened neighborhoods – almost like ghosts of the past themselves. Our final stop of the evening was The Greek Revival Baptist Church grounds, which features a tale centered around a purely maniacal doctor whom people referred to as “the head devil” – a surgical doctor who drank all day and spent night after night brutalizing his patients, amputating limbs unnecessarily and killing wounded soldiers for the fun of it. It made my flesh crawl and the hair on the back of my neck stand up!

Colonial Ghosts Williamsburg was a fantastic night out. I highly recommend it to anyone passing through, or to any locals that are looking for a great date night or late night activity near Washington DC. Their pricing is more than fair, and the team really loves what they do and are committed to being the best in all ways. The tour has gone above and beyond, and one thing that struck me as really great, is that Colonial Ghosts continues to research and get first-hand information about hauntings by people that have experienced them, so that those tales can be worked into the tours as well. 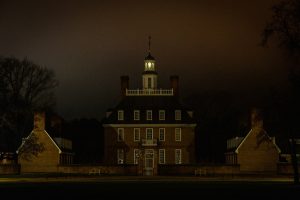 A huge thank you to Colonial Ghosts for allowing us to join them for a night of spooky fun in Colonial Williamsburg! We tweeted and even broadcast via Periscope. The next time you’re in the Washington DC or Williamsburg area, definitely set aside a couple hours for some ghoulish fun and take the ghost tour for yourself! You’ll be thrilled… to death!