The Spirits That Haunt Among Us

HOME » BLOG » HAUNTED STORIES » THE SPIRITS THAT HAUNT AMONG US

WHAT IS A GHOST? – THE SPIRITS AMONG US

What is the word spirit? And where did the words for it come from? They haunt right alongside us, around us, and in places you never think would be haunted. They can be where the least you expect them. And spirits are not “trick ponies,” they will not perform on cue every night or day, so invisible, they might still be there, leaving you a feeling of being watched or even dread.

Though the dread may be unintentional, as the phantom may not be evil (though there are times a bad one may be there), but your own psychic attention may give you that. Ghosts have been called spook, spirits, phantoms, fetch, haint (a common feature of southern oral and literary tradition), wraith, revenant, apparition, spectre, shade, and entity.

A ghost is the soul of a deceased person or animal

In traditional belief, a ghost is the soul of a deceased person or animal that can appear, in visible form or other manifestations, to the living. Descriptions of the apparition of ghosts vary widely: The mode of manifestation in photos or seen by the living’s eyes can range from an invisible presence, shadow people, translucent or wispy shapes, and orbs, to realistic, life-like visions—solids.

The deliberate attempt to contact the spirit of a deceased person is known as a séance. Paranormal investigators use equipment to find proof of paranormal activity and to make contact with phantoms.

In many tales, ghosts were often thought to be deceased people looking for vengeance, or imprisoned on earth for bad things they did during life. The appearance of a ghost has often been regarded as an omen or portent of death. Seeing one’s own ghostly double or “fetch” is a related omen of death.

Spirits: What are they composed of?

Another widespread belief concerning apparitions is that they are composed of a misty, airy, or subtle material. Early beliefs were that ghosts were the person within the person (the person’s spirit), most noticeable in ancient cultures as a person’s breath, which upon exhaling in colder climates appears visibly as a white mist.

This belief may have also fostered the metaphorical meaning of “breath” in certain languages, such as the Latin spiritus and the Greek pneuma, which by analogy became extended to mean the soul. In the Bible, God is depicted as animating Adam with a breath.

The belief in manifestations of the spirits of the dead dates back to animism or ancestor worship in pre-literate cultures. Certain religious practices—funeral rites, exorcisms, and some practices of spiritualism and ritual magic—are specifically designed to appease the spirits of the dead. Ghosts are generally described as solitary essences that haunt particular locations, objects, or people they were associated with in life, though stories of phantom armies, ghost trains, phantom ships, and even ghost animals have also been recounted.

Origin of the word

The English word ghost continues Old English gást, from a hypothetical Common Germanic *gaistaz. It is common to West Germanic, but lacking in North and East Germanic.The pre-Germanic form was *ghoisdo-s, apparently from a root denoting “fury, anger” reflected in Old Norse geisa “to rage.” The Germanic word is recorded as masculine only, but likely continues a neuter s-stem.

The original meaning of the Germanic word would have been an animating principle of the mind, in particular capable of excitation and fury. In Germanic paganism, “Germanic Mercury,” and the later Odin, was at the same time the conductor of the dead and the “lord of fury” leading the Wild Hunt.

Besides denoting the human spirit or soul, both of the living and the deceased, the Old English word is used as a synonym of Latin spiritus, also meaning of “breath, blast” from the 9th century attestations. It also denoted any good or evil spirit, like angels and demons. The Anglo-Saxon gospel refers to the demonic possession of Matthew 12:43 as se unclæna gast. Also from the Old English period, the word might also mean the spirit of God: the “Holy Ghost.”

The synonym spook is a Dutch loanword, akin to Low German spôk. It entered the English language via the United States in the 19th century. Alternative modern words included spectre (from Latin spectrum), the Scottish wraith (of obscure origin), phantom (via French ultimately from Greek phantasma, compare fantasy) and apparition.

The term shade in classical mythology translates Greek ????, or Latin umbra- in reference to the notion of spirits in the Greek underworld. And “haint” is a synonym for ghost used in regional English of the southern United States, and the “haint tale” is a common feature of southern oral and literary tradition. As for poltergeist, that is the term for a German word, literally a “noisy ghost,” for a spirit said to manifest itself by invisibly moving and influencing objects.

Wraith is a Scottish dialectal word for “ghost, spectre, and apparition.” It came to be used in Scottish Romanticist literature, and acquired the more general or figurative sense of “portent, omen.” In 18th- to 19th-century Scottish literature, it was also applied to aquatic spirits.

A revenant is a deceased person returning from the dead to haunt the living, either as a disembodied ghost or alternatively as an animated (“undead”) corpse. Also related is the concept of a fetch, the visible ghost or spirit of a person yet alive.

Then there is the poltergeist Most times, a poltergeist is just mischievous, though there instances of it being sinister, not unlike the Bell Witch. Was the Bell Witch a poltergeist or more along demonic lines? Good question. It was an entity that tormented a pioneer family that lived in what was then Red River, Tennessee in 1817-1827 ( Red River is now known as Adams, Tennessee).

It was substantiated by eyewitness accounts (other than the family), affidavits, and manuscripts written by those who witness the phenomenon. More about this interesting tale can be found in author Pat Fitzhugh’s, The Bell Witch: the Full Account. 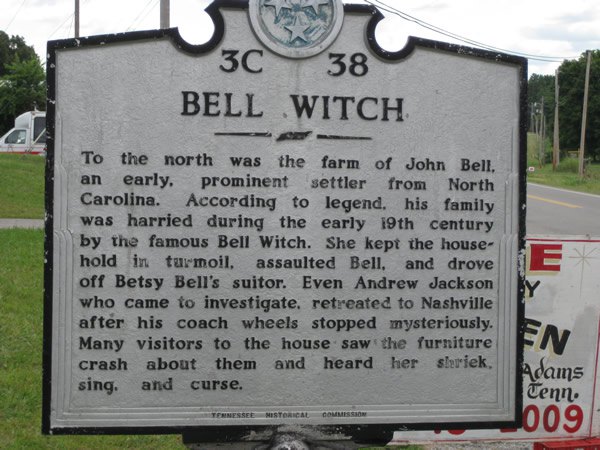 The entity is similar to a traditional haunting because the spirit is intelligent and are existing in the present moment with you. These spirits are malevolent and hostile, suffering from psychological instability or distress stemming from an unresolved conflict with the people who are being subjected to the demonic activity. Demonic presences tend to be ‘unleashed’ in order for them to manifest. This is one reason why the use of an Ouija Board is customarily discouraged among many ghost hunters.

So if you find one in the game section of the store, don’t buy one. Not understanding and without protection, one can open up a portal, letting in things they can not handle and most times, demonic in nature.

Another widespread belief concerning ghosts is that they are composed of a misty, airy, or subtle material. Early beliefs were that ghosts were the person within the person (the person’s spirit), most noticeable in ancient cultures as a person’s breath, which upon exhaling in colder climates appears visibly as a white mist. This belief may have also fostered the metaphorical meaning of “breath” in certain languages, such as the Latin spiritus and the Greek pneuma, which by analogy became extended to mean the soul. In the Bible, God is depicted as animating Adam with a breath.

In many tales, ghosts were often thought to be deceased people looking for vengeance, or imprisoned on earth for bad things they did during life. The appearance of a ghost has often been regarded as an omen or portent of death. Seeing one’s own ghostly double or “fetch” is a related omen of death.

White ladies were reported to appear in many rural areas, and supposed to have died tragically or suffered trauma in life. White Lady legends are found around the world. Common to many of them is the theme of losing or being betrayed by a husband or fiance. They are often associated with an individual family line, as a harbinger of death. When one of these ghosts is seen it indicates that someone in the family is going to die, similar to a banshee.

The stories of ghost ships have existed since the 18th century. The most notable of these is the Flying Dutchman. Some believe ghosts may also be angels and demons. In some paranormal circles it is believe that demons are non-human, while other spirits who did terrible things (like murder) are human, but passed on without benefit of being forgiven, are not. There are other ideas that those who did evil in life and not forgiven can become demons too.

Whatever we call them, apparitions are among us, unseen and sometimes seen. Are they proof that there is existence beyond death, spirits that haunt, or something else?

When you take a walk in the night, or go for a drive along a lonely country road, do not surprise if you see shadows move in the darkness. It may be just shadow people. Then again, it may be your imagination, at least, tell yourself that. Then again. . . wait. . .are those shadows closer than a minute ago? Watch out!