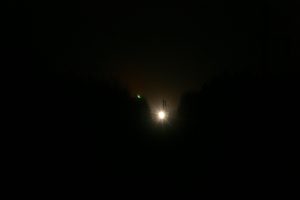 Situated in King William County between West Point and Danville is what used to be the Southern Railroad line. Off of Mt. Olive Cohoke Road is the Cohoke Crossroads, a railroad crossing with spooky legends attached to it. A mysterious yellow light appears on the train track on hazy, dismal nights. Sometimes it swings and sways as if a lantern is being carried by something who is not of this physical realm….Other times it holds steady as it gets closer and closer, like the light from a train engine bearing down on you. What exactly is the Cohoke Light?

The Legends of the Cohoke Light

There seem to be two main stories about the possible origins of the strange Cohoke Light. In the first story set in the 1800s, trains had many different employees who had different jobs along the train and tracks. One man was the brakeman, and it was his job to walk around the train when it stopped to make sure nothing was amiss. He carried a lantern with him to signal to the engineers upfront of any problems.

One night, a brakeman was checking his stopped train on the Cohoke Crossroad when he noticed an issue with the coupling mechanism for two cars. As he went to investigate it, the train suddenly lurched forward, decapitating the poor man. His coworkers ran to help him, but he was killed instantly. They had to carry his mangled corpse away to the caboose, but no one thought to grab his head.

Now the legend goes that the Cohoke Light is the headless brakeman, searching the empty tracks forever with his lantern for his missing head.

Maybe the light is not a lantern, but the light of a steam engine? According to local lore, during the Civil War, a train filled with wounded Confederate soldiers was being sent out to West Point to get out of Richmond. However, the train never made it to West Point. It was suspected the missing train was attacked by Union soldiers, with the Confederates killed and the train destroyed. Perhaps the Cohoke Light is the ghost of the train, trying to carry its passengers ever onwards to West Point.

This theory is much more recent, but some think the strange light might be of extraterrestrial origin. Sometimes the light seems to change color or shape, but most of the time it stays in its yellow form.

A Richmond man and his four friends saw the infamous light on the crossroads. It was such a dark and clear night that he saw what he thought was the light from an arc welder. His friends all gasped at the same time, and they watched as the light blinked away, only to return and change from red to multiple lights dancing around until they disappeared.

Whenever there are strange lights seen at night, the first counterpoint most people will bring up is the idea of swamp gas creating the light. It may sound strange, but it is indeed a phenomenon that occurs. There are plenty of legends worldwide of people lost in a swamp or bog who see a light in the distance, sometimes called a will-o-the-wisp or foxfire. They go towards the light and are usually devoured or never seen again. The creatures that lure them to their death–demons, fairies, ghosts, etc– may not be real, but the light in the swamp does exist.

It has to do with the chemicals in the water of these areas. Bogs, swamps, and marshes are places with little moving water–the water is still and ends up stale. Unmoving water filled with decaying animals and plant matter creates methane gasses under the water. If you’re in a bog, you’ll see air bubbles in the water, the methane being released in small amounts. Methane, along with other gasses, is flammable, and sometimes they react with the oxygen in the air, and WHOOSH! A fireball erupts from nowhere.

This problem was even mentioned in the diaries of men in the Revolutionary War that those hiding in bogs or swamps for the Redcoats would sometimes have their clothing randomly catching on fire! So, swamp gas igniting could be a culprit for the Cohoke Light, but like the rest of these theories will show, none of them can stand up to the light of day.

What’s Really Going on with Cohoke?

Well, it seems that no one really knows.

A local historian named Bill Palmer took a stab at looking into these legends. He’d written a few books on local legends, and knew all about the Cohoke Light. In fact, he pointed out that most of the lightings of the light seemed to start in the 1950s. A century is a long time for ghosts to start a haunting, he said.

The headless brakeman is a good story, and that’s about it. There are no death records from the 1800s that explicitly confirm this story. The problem also arises when this legend also pops up in other corners of the country. While there was probably someone who died and maybe lost their head in a train accident, it wasn’t on the Cohoke Crossing near West Point, VA. There was a car accident on the train tracks, a mother and daughter killed, but nothing as dramatic as a decapitation between train cars.

He claimed that the missing train car probably didn’t happen. Not only was there no record of it, but the story doesn’t make sense. If a train of wounded soldiers was being transported anywhere, it would not have been south of Richmond. The Union forces started their campaign at Fort Monroe in Hampton and had been pushing their way up to the Confederate Capital of Richmond. The train was going right into the enemy’s hands in the story.

Finally, let’s look at the swamp gas idea. It could be a contender, but swamp gas does not look like a round orb that gently floats around. Also, lights like the Cohoke Light or the Paulding Light in Michigan are renowned for their timely showings. Random explosions of swamp gas are not known for sticking to a timetable. They’re the sort of light to show up 15 minutes late with Starbucks.

Stories from the Cohoke Crossroads

People have claimed that they have seen a figure just behind the light, but it disappeared before they could make out any definite features. Others have said that the light only stops its ghostly march forward if someone tries to shoot it–which happens a lot, apparently.

It’s been almost impossible to catch on camera, so stories are all we have at the moment. Still, on a moonless night, outside the edge of civilization in true darkness, see if you can spot anything at the Cohoke Crossroads.

Maybe you’ll be lucky enough to see the light.

Want to sink your teeth into some of the original ghost stories of our country? Please check out Colonial Ghosts to take a walking Ghost Tour in Colonial Williamsburg. Ticket prices can be found here: