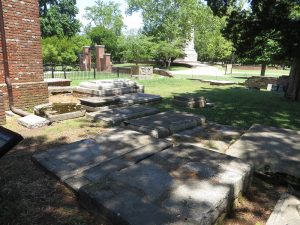 Jamestown Island is off Glasshouse Point, along the Colonial Parkway. It’s home to Historic Jamestown and the Jamestown Memorial Church. It’s here at the Church that visitors could come to see the legendary Mother-in-Law tree and hear the strange tale of familial obligation and young love.

The History of Sarah Harrison and Dr. James Blair

The new Jamestown Memorial Church was built in 1907 on top of the original 1617 church foundation. There’s a small cemetery behind the church, and among the interred deceased are James and Sarah Harrison Blair.

Sarah was the daughter of Colonel Benjamin Harrison, owner of the Wakefield Plantation. She lived an entitled life as a gentleman’s daughter in a wealthy family. Known to be both beautiful and headstrong, Sarah had many suitors once she was old enough to marry. She was considered a good marriage proposal for many young men at the time.

Her parents were happy to accept a proposal from a young man named William Roscoe. He was only a few years older than her and a gentleman, so her parents announced the engagement.

A couple of weeks after accepting the proposal, Sarah met. Blair. Having come from Scotland, he had served as a British governor and was also one of The College of William and Mary’s founders and commissioner. The fact that he was so charismatic and handsome was carved into his tombstone for eternity.

Sarah immediately became obsessed with him, and that’s when the real trouble started.

Like many, a man before him, and many since Blair found that Sarah’s mother hated him. Both of her parents were embarrassed about this change of heart. Not only was she arranged to marry a perfect suitor, but he was almost twice her age at 31-years old. It was considered a questionable practice to have such a large age gap between spouses. Such a young wife meant that they had married her off for the wealthier man’s money.

Despite pleading, begging, and even threatening their daughter, nothing would make Sarah change her mind back to Roscoe. Legend says the poor man died of a broken heart once she left him for Blair.

They were quickly married in 1687, so the public could overlook the scandalous nature of their ages. Her parents did not attend the wedding. By this point, the rift between mother and daughter was getting as wide as the Grand Canyon.

Sarah’s family was not done trying to change their daughter’s destiny. They had legal papers written up that annul the union, but they needed an attorney to make the case airtight.

Colonial Harrison, his wife Hannah, and their daughter took a carriage out of town to find a lawyer to handle the annulment. While on the way, a powerful storm rolled through the area. A bolt of lightning struck the carriage, and it crashed. There were no survivors. Sarah lost her mother, father, and sister to their cause.

During and After Their Marriage

Sarah was disowned by her family’s surviving members and forbidden from being buried in the Harrison plot in the Church’s cemetery. When she died in 1713 (without having children), she was buried in a stone crypt about six feet from her family’s plot. She was just out of arm’s reach of her parents and other relatives.

Blair lived for another thirty years and became a prominent figure in Virginia history. He discovered plans to build a college for gentlemen and Native American’s to send their sons to Henricus. However, the Indian Massacre of 1622 meant that colonists abandoned the settlement for almost a century.

Blair used these plans to approach King William III and Queen Mary II in 1691 about funding the creation of a college in Williamsburg. Since he was a clergyman for the Church of England, he proposed the new school could train other clergymen and missionaries on both sides of the Atlantic. Ministers would use the school to educate and civilize the Native American boys into Christianity.

The trip to London was successful. The letters were signed, and the College of William and Mary was chartered in 1693.  Blair was the first President of the College. A gangrenous rupture killed Blair in 1743, about 83 years old.

While it may have seemed that Sarah and Blair pulled one over on her parents, it appears that they weren’t ready to let the matter settle, even after death.

When Blair died in 1743, he was buried next to his wife and sweetheart Sarah. Their tombs only had a space of about a few inches between them.

Jamestown Island was abandoned and allowed to become completely overgrown. The original church from the colony ended up crumbling into ruin. As nature took over, the graves were forgotten.

Sometime in 1750 (calculated by looking at the tree’s rings from core samples taken), a sycamore sapling took root in the tiny space between the graves. The desertion of the island meant the sapling was able to grow to enormous size. The roots broke through the graves and destroyed Sarah’s headstone. Her entire grave was pushed towards her family’s plot, while Blair’s grave was shoved six feet in the opposite direction.

Preservation Virginia eventually made plans to restore Jamestown to its original colonial aspirations. A new church, called the Jamestown Memorial Church, was built over the previous one’s foundation. Though it was causing chaos with its overgrown trunk, the sycamore lived for years.

Such an exciting tidbit would not have become a legend without the help of a man named Sam Robinson.

The Legacy of Sam Robinson

When Jamestown Island was restored, the Memorial Church needed a sexton. In1922, Canadian native Sam Robinson was hired by Ms. Ellen Bagby and the Associate for the Preservation of Virginia Antiquities. He became the caretaker of the island in 1935.

Sam was a likable and friendly man who loved history and was an excellent orator. He enjoyed teaching kids about history and liked giving the Church tours to the new tourists visiting Jamestown. Between bouts of cleaning up the island and keeping things orderly, he would read, history being his favorite subject.

Learning the story of Sarah, Blair, and Blair’s mother-in-law stuck in his head afterward. When he began giving tours of the renovated Church, he made sure to mention the legend.

He explained in his tour that the sycamore separated the couple “like the mother-in-law would like to have done.” He remembered it was 1936 when the name “mother-in-law tree” stuck, and people would ask him questions about the tree. He shared that story with thousands of tourists over the years, sharing the legend far and wide.

The Queen Mother met Sam in 1952 when she came to visit Williamsburg and Jamestown. She even told her daughter, Queen Elizabeth II, all about Sam and his stories. Afterward, the Queen and her Prince Phillip loved meeting him in 1957 at the 350th anniversary of Jamestown.

At the time, they had the British Ambassador, Sir Harold Caccia, write a letter to Sam explaining that he was dearly beloved by the monarchs for his lovely demeanor and teaching ability. That letter was a treasured artifact of Sam’s until he passed in 1966.

The Future for the Blairs

Some versions of the story refer to the tree as the “cursed tree” or “mother-in-law’s revenge.” The Park Service eventually was forced to cut down the tree. Strangely, a new sapling started growing in the same place! As of 2007, Park Rangers removed the second tree, and the graves were restored to their rightful places, side-by-side, together again.

Still, Sarah’s mother has been reluctant to give up so far in breaking up the couple. It will be interesting to see what strange thing may happen next to keep Sarah and Blair apart once more.