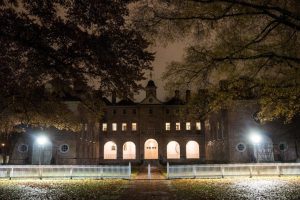 The College of William  & Mary is the second oldest higher education school in the country after Harvard University. The school was founded in 1693 and has the oldest college building in continuous use, the Sir Christopher Wren Building, from 1693 until the present day. The school has seen over 300 years of wars, struggles, and tragedies. Is it any wonder that there are supposedly ghosts that haunt the campus?

The Brief History of William & Mary

The College of William and Mary was founded in 1693 with charter letters from King William the III and Queen Mary II of England. At this time, the entire college was just the building we now know as the Sir Christopher Wren Building (or only the Wren Building). In the 1700s, the Indian School was built to educate Native American boys.

Williamsburg was the capital of the colony of Virginia for a while before it was relocated to Richmond. The school educated multiple presidents and other founders, including Thomas Jefferson and James Monroe. Four signers of the Declaration of Independence, and many of the Continental Congress, went to school there.

The school has been captured in wars several times and even seen its share of blood during the Civil War. The College has survived all the ups and downs history could throw at it.

William and Mary is considered a top school for a reason: current alumni of the school include (but are not limited to) actress Glenn Close, The Daily Show’s John Stewart, and former FBI Director James Comey.

The Hauntings of William & Mary College:

The Wren Building is the oldest in continuous use for educational purposes in the entire country, having been in service since 1693. During that time, there have been many tragedies that could lead to potential hauntings.

The building served as a hospital for wounded French soldiers during the Revolutionary War and Williamsburg’s Battle. Over 6,000 soldiers were killed and buried underneath the Governor’s Palace. Some were buried in random graves around Colonial Williamsburg. Spirits of these soldiers have been seen walking around Old Campus after dark.

The school was closed in 1862 because most of the professors and students left to join the Confederate Army. The Wren Building was converted into a barracks and hospital for the Confederates. Lack of medicine and painkillers meant that men with severe wounds were left to die, and many did. Doctors didn’t understand at that time how germs could infect wounds and kill people with dirty instruments.

In fact, during the Civil War, especially on large battlefields (like the Battle of Shiloh), it was common for men’s wounds to give off an ethereal in the dark! The light was called Angel’s Glow but was dismissed as superstition.  Since the Civil war, we now know that certain bacteria give off natural light (bioluminescence). So, these bacteria would eat away the narcotic flesh, leaving only clean, healthy wounds behind. Soldiers with this glow would fare better and had better chances of survival.

Glowing bacteria, however, could not help the soldiers when the Union forces overwhelmed them and captured the building. The Union burned it down so Confederate snipers could not use it for cover.

Because of this bloody history, students have been claiming to see ghostly apparitions of wounded men in the Wren Building. They never appear long enough to determine what war uniforms they are wearing. It’s common to hear pained moans echo around the chapel area.

Footsteps are commonly heard in the building and are either believed to be the soldiers looking for doctors or Sir Christopher Wren himself. It was renovated in the early 1900s to his architectural aesthetic, as well as the Sunken Garden.

Underneath the Chapel lies the crypt built in 1729 of famous Virginians, like Lord Botetourt and Sir James Randolph. The tombs have been raided a few times, including the Union soldiers. Another story insists that a fraternity may have used underground steam pipes to sneak in and steal some of their bones for rituals. None of these tunnels or crypts are accessible to the public.

In 1700, the Brafferton was called the Indian School. It housed Native American boys that were to be ‘educated.’ They were kidnapped, forced to leave their families and tribes, and learn how to become civilized. It was imperialism at its finest, and many of the boys tried escaping to no avail.

However, there is a legend of how, on misty nights, an apparition of a Native American boy will run through the fog as fast as possible across the Sunken Garden, trying to escape the school.

The Sunken Garden is a large sunken area where students like to lounge on warmer days, playing or studying at all times of the day or night. The garden was based on a design again by Sir Christopher Wren and was finished in 1935.

This explains why, when these ghostly boys are seen trying to escape from the school back to their homes, they are seen running through the garden above head level. They are running across the ground that was there 200 ago.

The building was once the school’s library, but now it’s home to the English department.

William and Mary are known for having challenging classes and exacting finals. Student suicides are, unfortunately, not uncommon. It would then make sense for a story about a suicide to spring up on campus.

This legend states that a girl stressed about her finals committed suicide on the building’s third floor 20 years previous. An apparition has been seen in the building and will appear to stressed-out students. What she does at this point depends on who is telling the story, but she will either:

No matter what she does, nobody stays in Tucker for long!

It opened in 1927 and now has become a recent co-ed dormitory. There’s a legend of a ghost hiding in the building’s attic. There’s no way for students to enter the attic as it’s sealed off, but it’s common to see lights on and flicker in the windows there. It’s a pretty neat trick considering the light bulbs are only hanging from strings with no wiring!

Students on the third floor often complain about hearing thudding noises and footsteps from the attic, but again there’s no way to get up there. Since the sounds have been going on for years at this point, it’s probably not animals stuck up there. Also, nobody had ever seen anyone walk up the stairs that lead up the attic during this entire time.

Recently, a student wrote about her experience playing with an ouija board while in her dorm with some friends. When they asked if the building is haunted, the planchette spelled out YES. Whether it was a joke or a sincere answer, the story still circulates every Halloween.

The Cemetery on Campus

There’s a cemetery on campus between Tucker Hall and Blow Hall that serves as a final resting place for college presidents, their families, and students who’ve passed on the campus. One student passed off mumps in the 1800s and was buried there.

No one has been buried there since 1894 until Wendy Reeves came along. She was a large contributor to the college’s art and international studies programs. Reeves had both a building named for her (The Reeves Center for International Studies) and was buried in the College Cemetery in 2007.