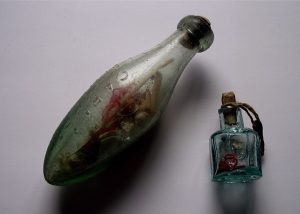 Things are not always what they seem. When archeologists discovered a blue glass bottle in the median of 1-64 in Virginia, they weren’t expecting to find it had nails inside. They also weren’t expecting to realize that this wasn’t just a bottle for keeping nails–it was more than likely a talisman for warding off evil. It was a “witch bottle,” one of less than a dozen found in the entirety of the United States.

The Discovery of the Witch Bottle

The Virginia Department of Transportation (VDOT) is legally obligated to have archaeologists inspect areas of interest before any project is allowed to begin. This partnership ensures that no crucial artifacts or scientifically important sites are destroyed. VDOT agreed to start a project that would widen the congested I-64 interstate near Williamsburg in 2016. As usual, an archeological survey was done on the site.

Archaeologists from the William and Mary Center for Archaeological Research(WMCAR) made a small discovery. In the median of the north and southbound highways, between exits 238 and 242, were the remains of a brick hearth and a dinner plate. Also discovered next to the hearth was a jade glass bottle. The top was broken off, and there were rusty nails inside.

Though an interesting find, Joe Jones (the current director of the WMCAR) thought it was a junk bottle, and it was cataloged as such.

Several months afterward, a team member named Olliver Mueller-Heubach was examining the bottle and had a different theory for it. He reached out to WMCAR’s founder Robert Hunter (a ceramics expert), and described the bottle they had discovered in detail.

When Hunter found out that the bottle had been discovered next to the hearth, he excitedly told Jones that they had found a Witch Bottle. While Jones was not exactly impressed by this, Hunter was able to explain not only how rare this artifact was (less than a dozen known in the United States) but what it was used for, and that was more interesting.

The oldest witch bottle found was in the East Anglia region of England, around the time of the Middle Ages. The custom came over the Atlantic with English colonists and was prevalent in the Pennsylvania Dutch region.

The witch bottle is simple in its design but effective. The bottles are filled with nails, hooks, thorns, or other sharp objects. Usually, blood, urine, fingernail clippings (and sometimes teeth) are added, and the bottle then becomes a witch trap.

Depending on the belief system, the witch (or evil spirit) would be attracted to blood and get trapped by the sharp objects inside. Its success was in its simplicity, in that anyone could put a bottle together quickly.

It’s related to the bottle trees commonly found in the South of the United States. The mouth of the glass bottles was slipped over the ends of tree branches and hung. Unusually something inside like sugar or tobacco would act as bait for the evil spirit, and it would get stuck inside the bottles. Since blue is a sacred color in certain Southern American cultures like the Gullah-Geechee of South Carolina, blue bottles were doubly effective as spirit traps. The concept of the European witch bottle is similar.

While over 200 of these bottles have been found in Europe and England, they are rare in the United States. Even recently, a pub in England was under renovation, and a witch bottle was found behind a wall, filled with hooks and fingernail clippings.

The practice of hiding the bottle is part of the ritual. The bottles are usually placed near or under a hearth or fire because the heat activates the talisman. If there were a curse active on a person, then if the afflicted creature one of these bottles and buried it near a heat source, the spell would break.

Who Created the Witch Bottle?

When the word “witch” is used, especially in such a sensationalist way, an immediate image of the old crone in a pointy hat comes to mind.

In reality, the bottle was created by a glass company called Charles Grove in Columbia, Pennsylvania, which produced these bottles from the 1840s-1860s.

The excavation site was also that of a mini-fort called Redoubt 9 built by the Confederate Army to keep the Union Army from invading Williamsburg in 1862.

Because of the fort’s layout, it’s known that the hearth was in the officer’s quarters instead of the soldier’s barracks. This means that the person who created this witch bottle probably looked like this:

The question then becomes, why would a Union Cavalry Officer create a witch bottle?

Setting the Scene–The Battle of Williamsburg and After

The Confederate Army was readying themselves for a significant battle with the incoming Union forces. The Williamsburg Line was built in 1861 by slaves under the command of the Confederate Army. The land between the York and James Rivers was sanctioned into 14 miniature forts to help stop the Union from crossing over to the peninsula of the Eastern Shore and riding up to attack Richmond, the Confederate Capital.

The Battle of Williamsburg commenced in 1862, and the Union soldiers were able to overtake the forts. Between May of 1862 and August of 1863, the 5th Pennsylvania Cavalry was stationed at Redoubt 9. Over time, the 5th Cavalry would hunker down and defend the fort from recapture by Confederate raids several times. That’s what the archeologists believed the bottle of nails was originally used for–fort repair. They thought the bottle was to help keep nails handy as the fort was resecured after and between battles.

The Union Army was hated by the residents of Williamsburg–they were cursed and spit on if they went into town for supplies. More than likely, this was the same regiment of soldiers that had destroyed the Wren Building of William and Mary’s college campus. They razed parts of the school and city down to the ground in the taking of Williamsburg. The locals were angry and vengeful, and the soldiers were in the middle of enemy territory.

Is it so hard to believe that an Officer would be willing to use a little bit of folk magic to help increase his and his men’s chances of surviving and making it back home?

“It’s a good example of how a singular artifact can speak volumes,” Jones said. “It’s really a time capsule representing the experience of Civil War troops, a window directly back into what these guys were going through occupying this fortification at this period in time.”

Why Aren’t There More Witch Bottles?

In Pennsylvania (and most of the early colonies), customs immigrated along with the European colonists that settled in the area. Folk magic was (and is) still used. Lighting candles on a cake and making a wish is a kind of folk magic, so the practice isn’t as evil or nefarious as it sounds.

Still, the question must be asked: if these charms were so pervasive in England, why are there so few here in America?

It may have to do with the lack of knowledge about these artifacts. Trained archaeologists looked at it and immediately thought it was a bottle of trash. Laypeople who may have found these hidden behind house walls or in backyards probably thought the same and threw them away or destroyed them.

However, not all hope is lost. Jones thinks that the dozen found is only the tip of the iceberg and already thinks that number is obsolete. Hopefully, the story of a Union Officer doing everything he can and praying to anything he can to bring his men home will make people cautious about destroying such artifacts.

Not for the typical Hollywood/horror novel reasoning–that ghosts or evil spirits will haunt you for your wrong decision–but because that little bit of history will be forever lost to the ages.

Humans are creatures of legacy and purpose. They want to know they will be remembered in the future, long after their bones are dust. And now, a Union Officer has been remembered because of his faith in a higher power and leaving that evidence behind for others to find.

It’s hard to believe so many revelations came from a little broken bottle, full of nothing but rusty nails and hope for the future.

Check out more haunted locations, watch a ghost tour from home, or book a ghost tour of Williamsburg in person at colonialghosts.com.