Helltown, its name perfectly fitting its legend, known for murderous Satanists and toxic chemical spills. Nestled in The Cuyahoga Valley in Ohio, there sits an eerie, deserted place regarded by locals as ‘Helltown.’ No people live in the area – living ones at least – but there are still remnants of the lives of former residents left behind. The whole town is surrounded by hazardous roads that seemingly lead to nowhere, locals believe this was done to confuse any wandering explorers. But the Helltown church seems to have inspired the town’s ominous name.

The tiny white church is in the center of Helltown and is central to all local theories. Some same the church was a place of worship for practicing Satanists, who still lurk around the closed-off roads, hoping to ‘recruit’ unwelcome visitors. Others believe the town was evacuated after a chemical spill that resulted in bizarre mutations of the residents and animal population. The legend of the ‘Peninsula Python’ stems from this theory.

There even sits an abandoned school bus, with legends of its own. The story of how the bus got back there is chilling. The bus was carrying a group of high school students who were going to one of the ski resorts near Boston. An elderly woman flagged down the bus and, in a panic, explained that there was a young boy in her house who was seriously hurt.

The bus driver, attempting to help, turned down her driveway and drove into the woods, hoping to revive the boy.  When the bus approached the house, Satan worshippers swarmed it and sacrificially murdered all of those aboard. The bus sat back there for over thirty years, standing as a warning to all who decided to venture into Helltown.

Helltown is home to six or seven separate legends, which has led this area in Boston Township in Ohio to be grouped as one large haunted site. The overgrowth creates a dark, almost cursed place, where ghosts, cults, Satanists, and even a wild-eyed serial killer were said to lurk. Helltown is the nickname given to the northern part of Summit County. The areas most associated with the legends are Boston Township and Boston Village, as well as portions of Sagamore Hills. First settled all the way back in 1806, Boston stands as the oldest village in Summit County. The construction of the Ohio and Erie Canal brought loads of people to the region in the mid-1820s. The area then began to flourish when a railroad station was constructed in the town. The station was named ‘Boston Mills,’ and the name stuck.

Helltown Over the Years

For a century, little changed in the small unassuming village. However, in the late 1960s, a nationwide movement was gaining traction that expressed concern over the destruction of our forests and called for more National Park land.  In 1974, President Gerald Ford signed legislation that enables the National Park Service to purchase land and use it to create national parks and reservations.

As a result of this legislation, on December 27th, 1974, hundreds of acres in Ohio, including the land within Boston Township, were officially designated a National Recreation Area. What many who supported the movement did not realize, is that this legislation allowed the federal government to buy homes and land right out from under current owners, with no warning. Once it was decided to buy a plot of land, there was no negotiation allowed – the owners were simply forced to relocate.

Imagine, you’ve lived at your home for years, your deceased family lived there before you, as well as their family before them. Suddenly, the government comes stomping through your small village town and tells you to leave. Pack up and be gone, no questions asked, no reasoning allowed. In what can only be described as a mass evacuation, hundreds of residents began leaving and entire townships were swallowed by the Cuyahoga Valley National Park.

These events were so tragic, that they were even featured in the 1983 PBS Documentary “for The Good of All.” The feelings were summed up in a statement left painted on one of the home’s walls, ‘now we know how the native Americans felt.”

The saddest part of this story is that the area was never actually converted to a park for all the enjoy, however. It now sits quietly, totally abandoned, with residents having left ages ago for no reason whatsoever.

Loads of legends come out of the Boston Cemetery, which sits deep in the middle of the area known as Helltown, including tales of a ghost who sits on a bench and stares out into space, forlorn, waiting for his family to come back for him. The only souls not forced to leave the area were the dead, now stuck in this abandoned ghost town, looking for their families which have left so long ago.

There run two roads through Helltown, both labeled as ‘dead ends’ even though you can watch them continue on into the distance. Legend says that local Satanic cults put up these signs to keep people out of their secret hideouts. Stanford Road, one of the main roads in Helltown, is sometimes referred to as The End of the World, or Highway to Hell. It is a twisting, dangerous road with a very sharp incline, so steep that when a car crests the top of the hill, it looks as if it is driving off a cliff. Some stories indicate that the road itself is evil, and is known to take possession of your vehicle, causing fatal accidents. It is said that if you park your car at the end of Stanford Road, you may meet your gruesome fate at the hands of the strange people who still patrol the area, protecting it. 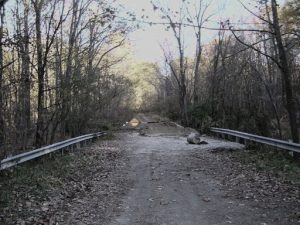 One rumor persists through the ages that the town’s residents were actually evacuated due to a large chemical spill, and the National Park was just a cover-up. The chemical spills were said to have caused mutations in local children, and even created the Peninsula Python, a gigantic snake that slithers the area. There is some truth to these chemical spill legends, however.

The Krejci family owned a private dump not far from Helltown. The Krejci Dump was part of the land sold to the parks in 1974, but the National Park Service did not acquire this land until 1985. Authorities thought the area was just an old junkyard, but park rangers started to report strange odors, headaches, and even rashes. One man became physically ill, vomiting profusely while collecting old bottles. The Environmental Protection Agency became involved and ran tests on the area. It was discovered that there were several highly toxic substances found, emanating from thousands of drums of chemicals dumped there by major companies. The site was closed and cleanup started but never finished.

An account given by a local paranormal researcher who explored the area truly sums up the overall vibe of Helltown – “I have experienced much in my explorations of there, some of which I don’t care to remember and some of which I can never hope to explain.

Helltown is not truly abandoned. It does have residents, but they are a strange and frightening breed. I have gone exploring the woods and cemetery of the area in the late night and wee morning hours, and have returned to my car to find strange people looking into its car windows. This has happened twice––once at 2:00 AM and once at 4:30 AM. Both times, the people fled as soon as they saw me approaching the car before I had a chance to speak to them. Both times, they were dressed in all black.

A part of me is glad that I didn’t get to converse with them because I have heard too many tales about the ways of Hell Town residents. Supposedly, they are all Satanists and worship at the town’s two evil churches. I have been to both of these churches, however not inside them. One, the Mother of Sorrows, has upside-down crosses hanging from it.

I have also been to the Boston Cemetery, where a ghost has been seen sitting on a bench. This cemetery is as dark a place as I have ever been. The graves date back to the early 1800s. I didn’t see the ghost when I visited, but I did hear strange growls and howls from the depths of the graveyard.  This was more than enough to convince me to leave, as the prospect of getting attacked by some strange bone yard dwelling beast was not appealing, to say the least.” 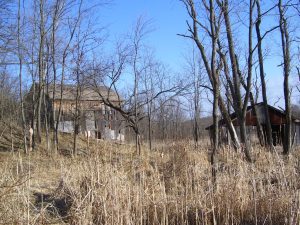 Helltown remains one of Ohio’s most spooky legends. Hundreds of locals traverse the area, searching for truth in the scores of myths. A quick drive for most residents in Northeast Ohio, Helltown is one of those local spots to visit on a dark autumn night, when there is just the right amount of chill in the air. Nowadays, Helltown isn’t as ‘creepy’ as it once was. The area is now part of the Cuyahoga Valley National Recreation Area, and much of the abandoned structures have been demolished. The cemetery and its ghosts remain, however, and only they are left to tell the tale of Helltown, Ohio’s toxic ghost town.