Stories from the Raleigh Tavern

Raleigh Tavern and ghost stories go hand in hand.  By their very nature, ghost stories are always about death. It can’t be helped. Without a death, there is no ghost. However, that doesn’t mean that every tale is steeped in despair. After all, ghosts are the manifestations of a human’s experience, so they can be as varied as the individuals that left their spirits behind.

Today, we’re going to talk about the Raleigh Tavern. There’s something bitter-sweet about it. The stories and incidents that surround the place aren’t gloomy, but there is a distinct silence that hangs in the air after each telling that suggests that the listeners are still mourning something.

Ah yes, once more, we’re discussing the ghosts that reside in Colonial Williamsburg. You’d almost think the place was haunted. This lovely little center of ecto-echoes is the Raleigh Tavern: 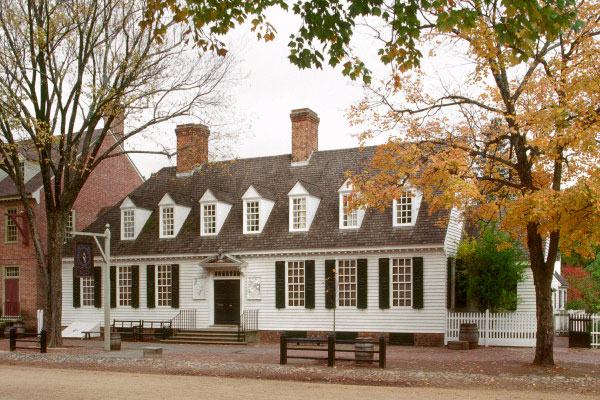 It was named after Sir Walter Raleigh, an Elizabethan aristocrat that attempted the first colonization of Virginia in 1585. The colony eventually disappeared without a trace, but his lead bust stood over the door of this name-sake tavern when it opened in 1717.

Oh, he didn’t disappear with the colony. He was executed in 1618. The tavern that was named after him, however, lives on. In fact, if you want to see what it looks like today, and this photo isn’t doing it for you, here’s a live-stream webcam from across the street. Neat!

So, what kind of place was this? Well, it was your standard new world tavern. There was drinking, gaming, and feasting. Balls were held and lovers met. There were brawls and house specialities. Boycotts and revolutions started here. Secret societies met. Life-time friendships were forged. Allegedly, there was even a drinking vessel fashioned from theskull of a world-famous pirate. It was a crazy place during a crazy time in history, but, apparently, the party never ended.

Put yourself in the streets of Williamsburg for a second. (Use the webcam, if it helps.) You’re wandering home after a long vigil at one of the many purportedly haunted structures in the city. Silence and moisture hang heavily in the air. You walk faster; the chill of the approaching morning is cutting through your coat and your patience. Far down the street, in the still reigning darkness, you see a lone figure wandering ahead of you.

Your nerves are taut from a long night of strong coffee and nervous terror, so you decide to walk along the main road, Duke of Gloucester Street. As you’re looking behind you to make sure the figure in the dark isn’t creeping out of the shadows, you’re suddenly relieved by the sounds of laughter and music. You smile knowingly at the buzz of celebration as you approach its source.

The moist air carries the scent of tobacco smoke from the Raleigh Tavern. It’s a strange, woody scent; it reminds you of something, but you can’t quite put your finger on it. As you contemplate the scent, a few other details line themselves up in your coffee-jangled mind.

The windows of the tavern are pitch-black. Even if there was a party deep inside a back-room, you’d expect to see some light filtering out of the place. There’s no one smoking on the street. As you look inside, you realize there’s no one smoking inside, either. Your glimpse through the window into the tavern’s lifeless interior abruptly silences the party. The sounds of harpsichords no longer pierce the night. Wait, harpsichords?

At this point, you might fear for your sanity the way Samuel Armistead did in 1956. Or, you might begin to remember the stories you’ve heard about the ghosts of the Raleigh Tavern.

The interesting thing about this haunting is that it can’t be directly attributed to any one spirit. The sounds from within these walls are, by and large, the sounds of humanity. So, we can’t focus on a single person’s life. We can’t even truly discern the exact party that the echo represents. Not yet, any ways. What we can do is discuss the history of the building and the history of the haunting.

Samuel Armistead’s report of the spectral shindig came to light in 1856 and similar accounts have continued to surface since then. Different people relate different details, but the stories all involve stumbling upon a posthumous party. No one has glimpsed the ghostly gathering, but its sounds stand out against a quiet backdrop. Makes you wonder if those sounds could blend in with  the busy main-street.

The haunting is sweet and simple, but that’s the ice-berg effect. There’s a lot of history contained in those peals of laughter. Many people partied within those walls, but they’re gone, save for a few midnight echoes and one standing structure.

It’s not the same structure that opened its doors in 1717, though. The original structure was burnt to the ground in 1859 by the same fire that gutted the Wren building. (Yes, that’s three years after the original tavern haunting was reported.)

The original foundations were covered by two stores, and given the fact that the rebuilt tavern is said to be haunted, we might end up looking into their history. However, for now, it’s enough to know that they were torn down when the Williamsburg Holding Company began the excavation and restoration of Williamsburg in 1928. The tavern was rebuilt from the old foundation; it was rededicated in 1932.

Now that we’ve briefly covered the creation, destruction and restoration of the tavern, let’s look at a few of the more noteworthy events that took place there. Remember theTownshend Acts? Well, in 1969, the House of Burgesses – “the first legislative assembly of elected representatives in the new world” – was protesting the Acts. So, Lord Botetourt dissolved the chamber. Some of the members of the assembly weren’t having any of that, so they reconvened in the Raleigh Tavern’s Apollo Room.

There, they decided that it was time to start boycotting British merchants. These weren’t small players, either. This non-importation organization included Thomas Jefferson, Francis Lightfoot Lee and Dabney Carr: in other words, serious players in the bid for American independence. On May 27th of the next year, after the Boston Tea Party, the Raleigh Tavern would again play host to the patriots that would help shape America’s future with another non-importation association.

On December 5, 1776, in the Raleigh’s Apollo Room, one of America’s first secret societies was formed: Phi Beta Kappa. It may have started out as a small student society, but it grew, proliferated and, even though the original chapter disappeared, it survived the American revolution. No small feat for a secret society. In 1779, another club, called the Pulaski Club, formed at the Raleigh. They still meet; they “[might] be the oldest men’s social organization  in the nation“.

The tavern had its darker sides, too. Slaves were auctioned on its steps, and there are the whispers of the macabre punch-bowl cobbled together using Blackbeard’s skull. All of these are pieces of the past that must not be allowed to fade into obscurity. Our phantom fiesta is a stark reminder of the thin trails of circumstance that bring the past to light.

So, even while we celebrate, it’s important to pay heed to our echoes in the night. If we don’t, then those memories will fade and take their wisdom with them. We’ll lose one of the many precious things the Raleigh Tavern stood for, the sentiment painted above the mantel in the tavern’s Apollo Room: “Hilaritas Sapientiae et Bonae Vitae Proles”

“Jollity, the offspring of wisdom and good living”