Haunted dolls are everywhere.  Read about them and other stories on Colonial Ghosts Blog 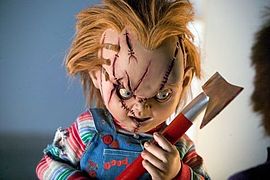 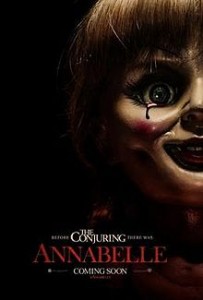 One of horror’s most iconic characters is Chucky from the film, Child’s Play. In the Child’s Play series, and a recently released film called Annabelle,  the dolls come to life and kill people.

The idea that a doll can come to life and kill someone is pretty creepy. What’s even more disturbing is that these Haunted Dolls are based off real dolls. People believe that these dolls are possessed by demons and stories of them terrorizing both adults and children have been told for years. There have also been studies conducted to learn more about these dolls.

The video below is real night vision footage obtained during a study of a doll believed to be possessed. No manipulations were made.

If you happen to come across a haunted doll, be careful. They will try to harm you if provoked.

The most famous of all these dolls is without a doubt Robert the Doll. The toy has terrified people for over a century and was the inspiration for the iconic horror film character, Chucky.

The doll resembles an early 20th-century American sailor and has become tattered throughout the years, giving it an uncanny appearance. Robert Eugene Otto, a painter and author who lived in Key West, Florida, was the owner of the doll. He acquired it in 1906 from a family servant who reportedly practiced the dark arts and voodoo. When she became angry with the family, she cursed the doll.

Servants began hearing two voices coming from Otto’s room. They assumed that the second voice was coming from the child. This, however, wasn’t the case.

Neighbors claimed to have seen the doll running around the house when the family wasn’t home. The family began to catch glimpses of the doll running from room to room, messing everything up in the process. He would often smash vases and emit a terrifying giggle while doing so. At night, Robert terrorized Otto by throwing his bedroom furniture around. When Otto’s parents asked him to explain what happened, he claimed that Robert did it. 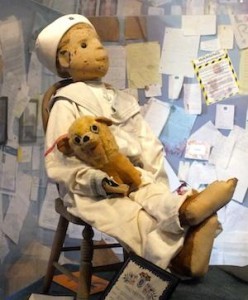 When Otto grew up, he inherited his family’s house and stashed the doll away in the attic. When he died in 1974, a new family moved into the home. They had a little girl who became the doll’s new owner. Terrifying things began to happen again. The girl began screaming in terror at night when she would see Robert scurrying around her bedroom. On some occasions, he would even attack her.

The doll is now on display at the Fort East Martello Museum in Key West, Florida. Visitors from all over come to look at the famous doll.

Legend has it that if someone takes a photo of the doll without asking permission first, the doll will curse them. In order to lift the curse, they must write a letter of apology. Letters that have been written throughout the years are on display at the museum. Probably a museum gimmick, but guests claim to have seen Robert blink or even change his facial expression before their eyes.

Another well-known doll is Annabelle, who looks like any other Raggedy Anne doll…but doesn’t act like one.

Annabelle was given to a girl named Donna as a gift from her mother in 1970. The college student and her roommate Angie loved the doll and it was kept in Donna’s room. At first, the doll was normal, but after some time the doll started to switch positions or move around in the apartment when the girls weren’t looking. As the weeks went by, the doll’s movements began to increase. Notes that read, “Help me,” started to appear on parchment paper. The strangest thing, however, was that neither of the girls ever bought parchment paper.

The girls were in denial, but their friend Lou was convinced that something was wrong with the doll. The last straw was when Donna awoke in her bed to find Annabelle next to her. When she turned on the lights, a red substance that looked like blood was leaking from the doll.

Terrified, the girls decided to call a medium to solve the problem. The medium reported that a seven-year-old girl named Annabelle Higgins was buried below the apartment and her spirit possessed the doll. Annabelle said that she felt safe with Donna and Angie and asked if she could stay with them. When they agreed, things got worse. 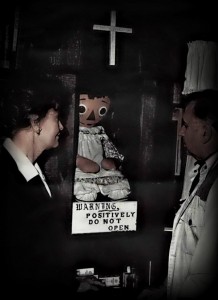 Not only did Annabelle continue to move on her own, but Lou began to have nightmares. In his nightmares,Annabelle would crawl up his leg and try to strangle him. Then one night, when Lou and Angie were planning a road trip, they heard a noise coming from Donna’s room. Lou went to check it out only to discover that the room was empty.

After noticing Annabelle on the floor, he got the strange feeling that someone was behind him, but when he turned around, no one was there. It was at this moment, that deep cuts were made to Lou’s chest. He doubled over in pain, bleeding on the floor. The seven claw marks on Lou’s chest healed in just two days.

The girls reached out for a second opinion. They contacted a priest who reached out to Ed and Lorraine Warren, who were well-known paranormal experts at the time. The Warrens discovered that the girls were tricked. Annabelle wasn’t possessed by a ghost, but by a demon who wanted to take possession of Donna’s soul. Donna decided to get rid of the doll, so the Warren’s took it to investigate further.

The doll immediately began causing trouble for the couple. Not only did they have car problems on their way home, but the doll began to levitate and continued to move on its own in their home.

Currently, Annabelle is on display at the Warren Occult Museum in Moodus, Connecticut. The Warrens placed her in a glass case that they doused in holy water, and she has remained there ever since.

Another doll located in the Quesnel Museum in British, Columbia is known as Mandy. The owner donated the porcelain doll in 1991 because she was so terrified of it. She told the curators that she would hear crying at night, which apparently ceased when she gave the doll away. 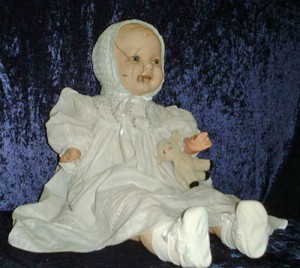 When Mandy was given to the museum, the strange phenomena continued. If she was around other dolls, they’d be destroyed. After placing her in a room, museum employees found papers scattered all over the place, almost as if the doll had a tantrum. Objects such as office supplies (books, papers, pens, etc.,) and lunches would disappear, and if they were found, they’d be in an entirely different place from where they were initially.

Also, batteries in electronics drained quickly and film equipment would stop working if anyone tried to capture the doll. People claimed to hear footsteps in the museum when no one was around. If you don’t believe the employees, many visitors claim to have seen the doll move or have seen its eyes blink or follow them.

Pupa (an Italian doll constructed in the 1920’s) was made to resemble her owner. The two were very close and the owner would often say that the doll spoke to her. 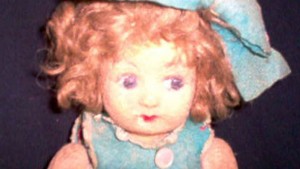 When the owner died in 2005, the family stored Pupa in a glass case. It was at this point that the bizarre phenomena began. The doll’s facial expressions and standing positions seemed to change without anyone touching her. She reportedly moves objects around in her display case and taps on the glass. When people turn around, her hands are pressed against it. The case has also been steamed white with the words, “Pupa hate,” written on it.

People believe that the doll is trying to get out of her case, but refuse to grant her wish.

There are many other dolls throughout the world that people believe to be haunted or possessed. For example, people claim that the hair on a Japanese doll called Okiku grows on its own. Also, a painting called The Hands Resist Him features a little boy and his doll that move on their own. When adults look at it, they get sick. When children look at it, they run away screaming. So remember kids, if a doll ever asks you to play with it, just say no.