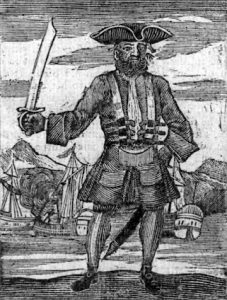 On November 2nd, 2016, several Colonial Ghosts tour guides along with members of Virginia Paranormal Investigations(VAPI) embarked on an investigation to follow in the footsteps of Williamsburg’s colonial condemned. This three-part investigation began at the Public Gaol, continued on to a park on Capital Landing road (Once called Gallows rd) and finally ended on the remnants of Hangmans Lane. The reason we chose these locations is pretty simple.

A Brief History of Hangman’s Lane

The Public Gaol (Pronounced jail) began accepting prisoners in 1704 and was intended as short turn holding for those awaiting trial or waiting for their sentences to be carried out. Sentences such as whipping, branding or hanging. This building is believed to be haunted by a number of figures. For one the family of the goalors, particularly Peter Pelham, who lived in a section of the gaol are believed to remain there.

The animated conversation between two women has been heard here and the hunched image of a child playing has been seen here in broad daylight. The Goalors house is also known to have a host of your typical haunting sounds. Creaking floorboards, slamming doors and the like.

While all of that is very spooky, visitors are most drawn in by stories of the gaol’s most famous prisoners. Members of Blackbeard’s pirate crew. Edward Teach (Maybe Edward Thatch), more commonly known as Blackbeard, began his career as a privateer during the War of Spanish Succession in the early 1700’s. He later turned to piracy, serving under a man named Benjamin Horningold.

When Horningold retired, accepting pardon for his crimes, Blackbeard took his own command and in 1717 captured a French vessel which he renamed the Queen Ann’s Revenge. He armed her with 40 guns and became easily the most notorious pirate of all time.

Blackbeard struck fear into the heart of sailors, carrying multiple guns and knives on his person and lighting rope fuses in his long beard so it smoked and smoldered. While his image was one of nightmares he was a thief, not a murderer. There are NO verified reports of Blackbeard ever killing anyone. He would attack ships then board them to steal food, liquor and weapons. In fact, in 1718 he blockaded Charleston, South Carolina and took a number of important men captive, stating that he would kill them if a ransom was not paid.

The ransom never came. Blackbeard pushed the deadline back day after day. Finally, he released all of the captives unharmed without receiving a penny for them.

His reasoning, at least as much as he told them, was that they couldn’t tell others how terrifying he was if they were dead. In June of that same year he accepted a pardon and retired. He supposedly married a plantation owners’ daughter who is believed by many to be his 14th and final wife.

By the end of August, he was back to piracy, terrorizing the coast of the US and disrupting trade for the Carolinas and Virginia. This would be his undoing, as his actions grabbed the attention of Virginia Governor Alexander Spotswood. He sent off Lt Robert Maynard with orders to bring back Blackbeard alive. On November 22nd, 1718 Maynard located the Queen Ann’s Revenge, which had been renamed the Adventure during Blackbeard’s month of retirement.

Crews clashed as Maynard and Blackbeard battled between themselves. Finally, while reloading his pistol, Blackbeard succumbed to blood loss. When his body was examined he had been shot no less than 5 times and stabbed more than 20. Maynard beheaded the pirate, hanging his head on the bow of his ship as it docked in Hampton, VA. Blackbeard’s decapitated body was thrown overboard where legend says it swam three times around the ship before sinking.

After the defeat 16 members of his captured crew were brought to Williamsburg where they stood trial at the Capital building. During that trial one of the Captives, Samuel Odell, was found not guilty as he had been captured the day before by Blackbeard and was not actually a pirate at all.

The rest were sentenced to hang but another, Israel Hands, somehow received a royal pardon and returned to England where the final mention history has of him places him begging for his bread in the streets of London.

The remaining pirates were marched up Gallows road, now known as Capital Landing, to Hangman’s lane. They were executed then hung in iron gibbets all along the road and left to rot for at least a week, a sign of the price of piracy.

Blackbeard Crew Members Believed to have been Executed in Williamsburg

There is record of at least one member of Blackbeard’s crew being hung in Hampton, VA. While the record says the following men were hung in Virginia in 1718, the city is not stated. The numbers, however, match the story so it is possible to believe that all of these men died in Williamsburg.

Joseph Brooks Jr whose father, also a crew member, was killed on Nov 22, 1718 during the attack on Blackbeard.

Caesar. A man of color very loyal to Blackbeard. He was under orders to drop a match into powder stores if the ship was captured but was apprehended before he could.

Those pirates were just a few of the more than 170 individuals hung there. The last was a slave in 1820. In 1992, a team discovered what is believed to be the remnants of the gallows.  It had buried for more than 100 years, while they examined the site for Virginia Natural Gas Inc. Their research unearthed a triangle of post holes. They were confident that these holes were used as the base for the gallows.

They also uncovered several nails and a number of broken bottles. Since executions were a public form of entertainment it is not surprising that the dig team would uncover evidence of merrymaking at the original gallows site.

With all this morbid history in mind our guides and VAPI plotted a course to see the entire Hangman’s Path from gaol to gallows. While evidence is still being compiled here are a few highlight photos from the evening. 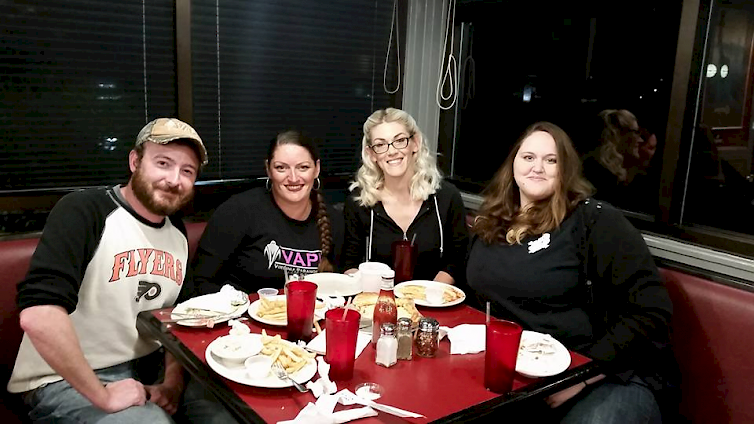 Members of VAPI Jeff, Linda and Kyle meet up with Colonial Ghosts manager Nicki S for some prehunt grub at New York Deli. 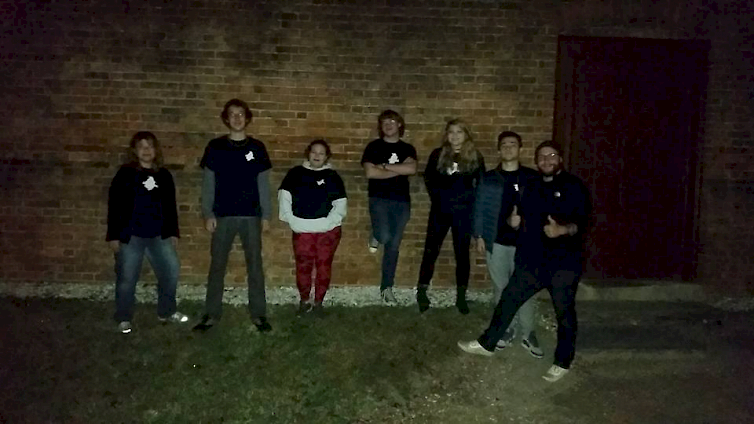 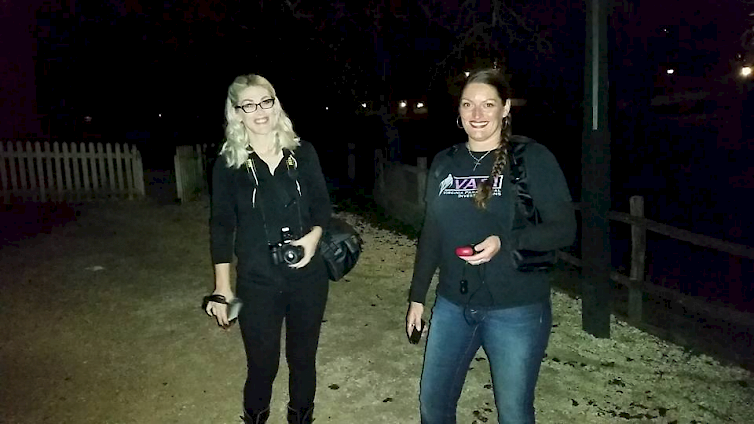 Kyle and Linda of VAPI at the public gaol with EMF and video equipment at the ready. 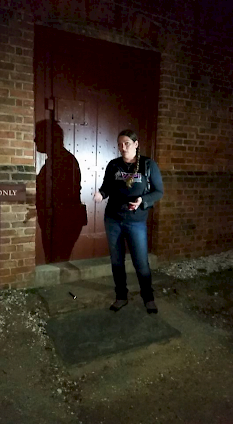 Linda explaining the process for flashlight sessions as well as the controversy around their use.