Grace Sherwood, the Witch of Pungo 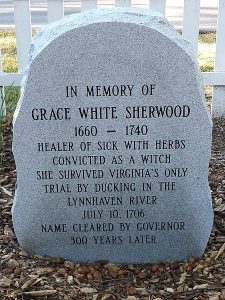 Grace Sherwood, the Witch of Pungo

Grace Sherwood was the last convicted witch in Virginia, and the only one who was convicted using the method known as “ducking.” She was said to have cursed livestock and changed into a black cat to cause mischief. Who was Grace Sherwood, really?

Who was Grace Sherwood?

Grace Sherwood was the daughter of a carpenter and was a planter’s wife and midwife. Her husband was named James Sherwood in 1680. She had three sons, John, James, and Richard Sherwood and lived in Princess Anne County in Pungo, Virginia, which is nowadays an area of Virginia Beach. She was known for growing herbs to help heal both people and animals and wearing men’s clothes. There are no images of Grace, but it is believed she was quite pretty and smart; it’s thought that the witchcraft rumors were spread by jealous wives.

Either way, Grace was taken to court multiple times for the crime of witchcraft.

What Made a Witch In Colonial America?

Witches were believed to have made a blood pact with the Devil for powers, immortality, and other supernatural abilities. If the witch’s “book” could be found with the contract signed in blood, that was proof of her guilt. If a farmer’s cotton crop failed, it was believed a witch had cursed it. There were also physical marks to look for on a witch. Devil’s Marks were proof of the contract, and could be anything like:

Sometimes moles and birthmarks were called out as “witch’s teats,” where the witch allowed either her familiars or the Devil himself to suck her blood.

Witches were first and foremost the outsiders of the community. The widows or widowers, the antisocial loners, the old, or the grumpy.  Most of the time people who were found guilty of witchcraft (for men were found sometimes to be witches too) were usually in the wrong place at the wrong time. They had an argument with a neighbor and that person’s bull died overnight.

They were the scapegoats in the community, someone to lash out at when there was no one else to blame.

America, at the time, was a suspicious and superstitious place, but the differences in how the colonies handled their witches are quite interesting.

The infamous Witchcraft trials of Salem, Massachusetts lasted from 1692-1693, and 19 innocent people were executed. While witchcraft was considered a real problem in the colonies, the mass hysteria that occurred at Salem never appeared in the Commonwealth of Virginia, and the treatment of Grace Sherwood would be considered pretty polite in comparison.

There are  a few reasons for these differing opinions on witchcraft between these colonies. In New England, people had formed tight-knit communities based on the shared morality of their Puritan ancestors. Public pressure could cause disagreements to skyrocket in slander about witchcraft quickly.

Ministers also acted as judges, so there was a religious fervor to these happenings. Once they were involved it wasn’t just neighborly spat anymore, it was literally about good vs evil. Ministers were also known to accent hearsay as supernatural proof of the Devil’s involvement.

In Virginia, there were few communities at that point. Most people lived on their own farms and plantations, with either waterways or rough roads between them. Religious leaders did not oversee neighborhood arguments, courts did. The law was more concerned with issues that could cause the breakdown of societal bonds such as gossip, slander, or adultery.

Witchcraft trials were time-consuming and divisive, so Virginia did not oversee them often. When they did, slander and hearsay were not accepted evidence. The courts made the burden of proof on the accusers, and those accusers could be then taken to court for slander, so it was a long and expensive process.

Also, Virginia did not execute their witches. Of the 19 witchcraft cases in the colony’s history, all but one was acquitted. The man in question served jail time for a year, then was free to go.

The initial claims started in 1697 when a neighbor, Richard Capps, accused her of witchcraft when his bull died. The court made no decision but the Sherwoods took the Capps to court for slander and was settled. This was a cycle that would repeat a few times: accusation, court, acquittal, sue for slander, rinse and repeat.

In 1698, Elizabeth Barne took Grace to court, claiming she had turned into a black cat, snuck into her bedroom, and whipped her before jumping out through the keyhole.  The matter was resolved and the dimension suit failed, meaning Sherwood had to pay the court costs.

In 1701, Mr. Sherwood died and Grace inherited his property without remarrying. This seemed to begin a new wave of witchcraft accusations, which could land her in jail. Some historians think that this renewed interest in making Sherwood guilty of witchcraft may have been due to the interest in taking her land.

She Won A Small Amount

Either way, in 1705 Grace was involved in a fight between the Hills. She took them to court for assault and battery. On December 7, 1705, she won a small amount for the court case but not the amount she originally wanted.

Immediately after, the word witchcraft was thrown at Grace again. January 3, 1706, Elizabeth Hill claimed Grace had caused her to miscarry. She was forced to show in a February 3, 1706 hearing, and in March a panel of 12 “ancient and knowing” women to look for any devil’s marks on her body. The group found two marks, as proof of her contract with the Devil. The forewoman of this group overseeing the search was Elizabeth Barnes, the same woman who originally accused her of turning into a black cat!

Having found this proof, the court called for Grace Sherwood to be “ducked,” to prove or disprove her innocence.

“Ducking” was a widely used test for a suspected witch to go through. The witch would be tied up, but in a sack, and put into a body of water at about waist-height. If she sank, she was innocent and could be buried in the Church’s graveyard (the intention was to not let her drown, however). If she floated, it was because the purity of the water was repelling her wickedness. Grace consented to the test, and on July 10, 1706, she was ducked in front of a large crowd of people from all over the colony.

Site of the Trial

Rowed out about 200 yards into the river, she was thrown, and she floated. After that, a sheriff tied a 13 pound Bible to her neck to try and help her sink. Under the water, she instead got out of her bonds and swam to the surface. The heavens opened up and the crowd was drenched in the downpour as she broke the surface.

Grace Sherwood was a Witch.

Court records tell us that afterward, there was a second trial for Grace Sherwood. The results have unfortunately been lost to time. It was recorded that she spent 7 years in jail for her witchcraft conviction. Once she paid the back taxes on her land, in 1714 she was allowed to return to her home.

Grace Sherwood stayed on her property and continued to work and farm it until she died at the age of 80 in 1740. According to legend, however, when her son placed her body by the chimney, it was instantly whisked away up. The only clue as to why was a cloven hoof print in the ashes by the coals…

Grace’s legacy may have stayed hidden if it wasn’t for two women who ushered in the winds of change for Virginia’s witch. Louisa Kyle wrote a children’s book in 1973 called The Witch on Pungo, with tales relating the history and legends of Grace Sherwood.

Belinda Nash has done the most for poor Mrs. Sherwood. The founder of the Ferry Plantation wrote a biography (A Place in Time) on Grace and petitioned three Governors for over 20 years to get her name cleared. Finally, Governor Tim Kaine exonerated Grace Sherwood’s name on July 10, 2006, on the 300th anniversary of her trial by water.

Now in the area is Witchduck Road, a tribute to Grace. In front of the Sentara Bayside Hospital, a statue of Grace was unveiled. The hospital currently sits close to where the courthouse and the ducking took place. Created by Robert Cummingham, it shows Grace with a basket of rosemary and a raccoon at her feet, a reminder of her love to heal both animals and people.

And finally, a small headstone was erected in the garden of the Old Donation Episcopal Church, her old parish. The stone is surrounded by rosemary.