The Ferry Plantation House.  A witch, eleven ghosts, and still counting – Virginia Beach has its own nexus of paranormal activity.

Ah, Virginia Beach, Virginia. Pinpoint it on a map, and you’ll immediately see why it deserves its name.

Virginia Beach was where Captain John Smith and his team of explorers first made landfall after departing from England to fulfill King James I’s mission of colonizing the New World. Its exceptional location, right at the mouth of the Chesapeake Bay, has made it a center for modern commercial and recreational activity alike. For beach fans, Virginia Beach offers endless spans of sand and ocean; for families, a three mile long boardwalk (not to mention numerous amusement parks, concerts, and festivals); for night owls, casinos, comedy clubs, and bars aplenty… No wonder this resort city has racked up many accolades:

But venture away from Virginia Beach’s 24/7 buzz of human activity (if you dare), and you will discover that it’s not just drunks that go “bump” in the night. You can be sure that an area originally occupied by “devil worshipping4” Native Americans and has a past fraught with witchcraft cases (the infamous trial of Grace Sherwood5, “The Witch of Pungo,” for instance) is a hotbed for paranormal activity.

The best place to experience this for yourself? Ferry Plantation House, where Sherwood’s trial is actually reenacted every year and a full tour (“The Stroll of Lost Souls”) is dedicated to those more interested in getting some screams than fixing tan lines. 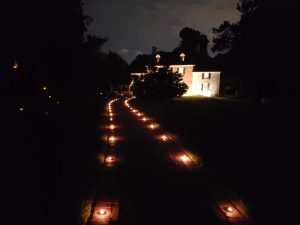 It is important to talk history, before haunts. Virginia Beach’s first inhabitants were the Chesepian Indians, an Algonquian-speaking tribe believed to have been wiped out by the Powhatan in the early 1600s. The numerous arrowheads, jewelry, and pottery shards discovered in the area thus store more than useful archaeological information; perhaps the vengeful spirits of the extinguished clans reside within them as well.

The system of natural creeks and tributaries made this area especially appealing to wealthy colonists. Plantation owners busied themselves with taming both land and water. Adam Thoroughgood, a prominent figure in colonial Norfolk County, created the region’s first ferry service in 1636. In 1642, another esteemed Virginian, Savill Gaskin, was granted permission by the county courthouse to start a second one, this time on the Lynnhaven River7. This is where Ferry Plantation House, also referred to as Ferry Farm, gets its name.

Gaskin’s project prompted an influx of patricians (and their slaves) to move into the Old Donation Farm neighborhood. Many of their luxurious abodes were constructed from remnants of previous buildings. The site on which Ferry Farm falls, for instance, was also where the third Princess Anne Courthouse stood from 1730 to 1751 and Andrew Walke’s tavern operated in the 1770s. The Walke family’s mansion burned to the ground in 1828; two years later, George and Elizabeth MacIntosh used its remnants to lay the foundations of the farmhouse as it stands today.

Ferry Farm is one of three Princess Anne houses on the plantation property. It is a must-visit for fans of Federal architecture and tourists looking to experience life during the Colonial times. It is two and a half stories tall and is a spacious abode complete with parlor, attic, library, and multiple bed chambers. But if you’re looking for one of the eleven ghosts the house is reportedly haunted by, your best bets lie in its oldest section, the southeast wing.

That’s right, eleven ghosts – not one, not two, but eleven. Up your odds for a ghostly encounter, and get some variety into your hunt for the supernatural. Perhaps you’ll see Henry, a slave, looking for some vengeance; or hear the cries of Sally Rebecca Walke, grieving over the death of her lover; or get a replay of the Lady in White tumbling down the stairs, breaking her neck; or come across one of the victims of an 1810 shipwreck. But it’s a run in with The Witch of Pungo, of course, that’s most coveted. A section from Alpheus J. Chewning’s Haunted Virginia Beach demonstrates why:

“In spite of her death, rumors and stories continued. One tale says that on the night she died, she had her sons set her barely living body in front of the fireplace. At the moment of her death, a strong wind blew down the chimney, filling the house with smoke and soot. When the room cleared, Grace was gone and there was a cloven hoof print in the ashes, left by the Devil coming to reclaim his own.”8

Grace White Sherwood was a farmer and midwife who lived in Princess Anne County during the 1700s. Her skills as an herbalist were often overshadowed by her beauty. Perhaps this is why so many women, threatened by her good looks and perplexed by her preference for pants over dresses, were more than willing to accuse Grace of dabbling with the Devil. Grace was dragged to court on numerous occasions by neighbors seeking to blame her for ruined harvests, bad weather, and dead livestock. Besides further defaming Grace’s name, none of them saw much success. It was only Elizabeth Hill’s 1706 attempt that resulted in a guilty conviction.

Elizabeth had suffered a miscarriage, and blamed Grace for her loss. The court opted for a trial by water – “witches, went the belief, cannot drown, since clean water rejects them.”9 Grace was ordered to be dunked into the Lynnhaven River, and, should she fail to sink, would be found guilty of the crime.

Unfortunately, Grace bobbed to the surface. She was then seized from the water by the mob of onlookers who were only too happy to have The Witch of Pungo finally thrown behind bars.

Grace is believed to have been incarcerated for as long as seven years and nine months.10 She would pass away on her farm, leaving behind five shillings to each of her sons, as well as a legacy of being the first witch of Virginia Beach. It took nearly three hundred years for poor Grace to be finally exonerated from her crimes.11 Though she did not live to see her good name restored, Grace has a statue12, created by master sculptor Robert Cunningham, dedicated to her near the Sentara Bayside Hospital.

If her body wasn’t retrieved by Satan, then it is rumored to lie beneath a tree on the plantation grounds.

“[…] every full moon feral cats gather, climb into the tree and howl. Many people believe that Grace’s spirit rises and joins them. Some residents in Witchduck neighborhood have reported seeing the image of a woman with long, wet hair walking along the banks of the river at night.”13

And if you’ve seen The Ring, you know just how extra terrifying a sopping spirit is.