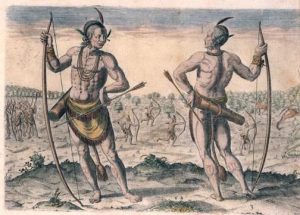 HOME » BLOG » HAUNTED STORIES » THE GRAVES OF THE POWHATAN

The graves of the Powhatan.

One of the reasons Williamsburg is such a unique and fascinating historical location is because it was not built by a single population. While Williamsburg in reality owes its success and longevity to dozens of cultures, when we look at the colonial period we tend to focus on three major groups: the English colonists, the African slaves, and of course the local native population, primarily those tribes making up what we now call the Powhatan Confederacy.

The Powhatan confederacy began as six tribes united in part under Chief Powhatan. Powhatan, whose proper name was Wahunsenacawh, over his time in power eventually affiliated more than 30 Algonquin tribes in Eastern Virginia. We say that these tribes were only united in part as each tribe was led primarily by their own chief. These tribes paid tribute to Powhatan in return for a number of assistances including food during famine, military protection, and even forms of spiritual power.

He also distributed sacred materials like copper and particular colors of shell beads. When the English arrived at Jamestown in 1607, they landed directly across the river from where Powhatan ruled – a capital of sorts called Werowocomoco located in what is now Gloucester, VA. Due to its proximity to Werowocomoco, many of the English settlers dealt with Powhatan and his people directly.

Relations between the English and the Powhatan were negative from the very start. Due to a bad run-in with the Spanish before they arrived, the colonists fired on the natives the moment they were seen, resulting in Powhatan deaths within the first two weeks of the Englishmen’s arrival. Conflicts like these, eventually known as the Anglo-Powhatan Wars, continued until 1646.

The resulting English victory led to a near extinction of Powhatan culture and tradition. In fact, the Powhatan language itself became dormant due to the social disruption and genocide of the people who spoke it. Much of the vocabulary and pronunciation has been lost. While scholars have attempted to piece together the lost words of the Powhatan using English writings from the colonial period, in all reality what is gone is gone forever.

As with the language, much of what we know about Powhatan history and culture during the colonial period comes from second and even third hand sources. Much of this information is not from friendly informants, but from the observations of the enemies of the Powhatan, namely the English colonists and their one-time leader Captain John Smith. 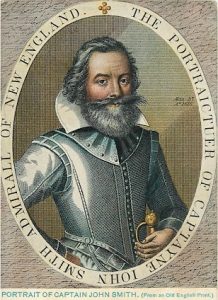 Smith, while regarded as a famous figure by many Americans due to the mostly fictional story of Pocahontas, is a far from credible witness. In spite of what Disney has to say on the matter, Smith never viewed the Natives as people. He belittled them, stole their food, burned their homes, and then grossly misrepresented their culture in his publications. Yet his writings are some of the only records remaining that have any details about the colonial era Powhatan. This is incredibly frustrating for historians and truly devastating for the modern Powhatan.

Among the many lost and distorted customs of the Powhatan are their ancient burial practices. Using pieces of information from written English accounts, archeology, and the traditions of other native tribes, scholars have painted a picture, ranging from mourning to final interment, of close-knit families and communities.

All Powhatan burials began, like those from thousands of other cultures all over the world then and now, with mourning. Beginning in some instances seconds after death, loved ones would take part in wailing for the dead – a heart wrenching and sorrowful cry to express their loss. While primarily associated with women in mourning, it was not uncommon for men to take part in the cries when they lost someone significant. One account of this comes from the capture of two Chickahominy brothers in 1609. When the English captured them, one was nearly smothered in the scuffle. Believing his brother had died, the other immediately let out cries of “bitter agoni

After initial mourning the Powhatan would lay their citizens to rest in one of three ways. The first was the use of what most modern Americans would call a traditional grave. This practice was used for common individuals alone or in groups. Using sharpened sticks the Powhatan would dig into the soil. While written descriptions by the English colonists have described these as being very deep, archeological investigations of discovered burials are typically shallow, occasionally only a few inches below the surface.

These graves were lined with sticks. The deceased would be adorned with their jewelry, as jewelry was an important mark of status in Powhatan culture both before and after death. Along with their jewelry, Powhatan graves are often found containing objects of personal importance to the interred, including weapons or tools. With their prized belongings, the individual would be wrapped in skins and placed in the grave. The orientation of a person in the grave does not seem like an important factor as graves have been found with individuals on their backs, sides and even laying directly on their faces.

The second Powhatan burial practice is that of cremation. While there is evidence of the Powhatan cremating, it is not known which individuals within their society were cremated. The Powhatan used fire for a number of purposes including making canoes, drying meats, and cooking, but it was also used for punishing criminals. Unwritten Powhatan law was very strict about some infractions, including infanticide and stealing from family. Often those who committed these crimes, and sometimes prisoners of war, were put to death by fire.

Some would be tied then laid on hot coals. Others were flayed alive before their body parts were thrown into the fire. While we know that lawbreakers were cremated in this fashion, it is not known whether or not other members of the tribe may have been cremated as well.

The final and most fascinating burial method for colonial era Powhatan citizens is not exclusive to the Powhatan or even Algonquin nations as a whole, but is found in Native tribes across the continent. These are known as scaffold burials. The dead were disemboweled then wrapped in skins with their prized possessions before being laid on a wooden scaffold several feet in the air.

The body would remain on the scaffold decaying until it was reduced to bones over the course of about two years. If there was stubborn flesh still on the bones after about three years, then the bones would be cleaned. After the bones were free of flesh and dry they would be wrapped in new skins. These packages of bones were then hung in the home of the departed individual’s family.

The bones of Chiefs that were cleaned in this method would be held in the temple for a period of time. Every five years or so a festival was held during which the bones of loved ones were taken and buried in an ossuary. Bones were stacked layer by layer until a mound formed. Many of these burial mounds can still be seen in several states along the east coast including New York, Georgia, and Virginia. 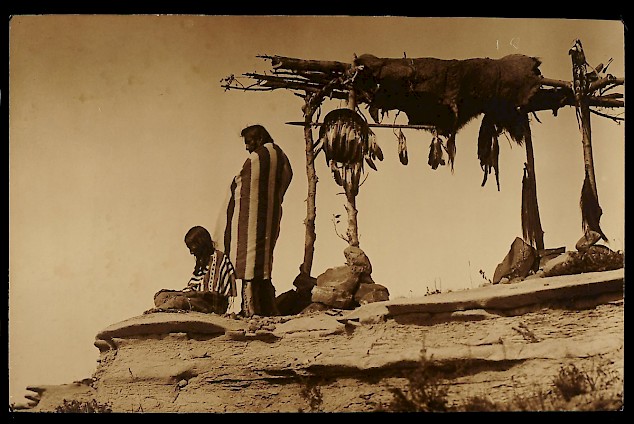 A Fourth Method For Chiefs

While these are the only three burial methods used for commoners for which we have evidence, there was a fourth reserved for chiefs: the practice of mummification. Chieftains, and possibly other noteworthy individuals, had their skins were flayed from their bodies. The bones were then cleaned of flesh and dried before being returned to the skin through a slit along the back. The spaces between the skin and bones were then filled with a fine white sand and the skin was sewn up.

The final product was oiled to avoid corruption or shrinking. What flesh had been removed from the bones was carefully dried and sewn into a basket that was placed at the feet of the mummy. This mummy, from all reports, was profoundly lifelike. In addition to this very elaborate mummification process, some chiefs were simply mummified by evisceration, having their inside stuffed with copper beads and then being dried.

After a burial or after a body was placed on a scaffold, a formal process of mourning occurred. If the person was wealthy their families would throw beads to the poor and host a feast for the entire community. Woman in mourning from every social class would paint their faces black and remain in their homes wailing for the dead for a period of time. Long after a person died their graves or ossuaries would receive visitors.

Thomas Jefferson had a particular interest in a burial mound near Charlottesville, Virginia. He included in his writings on the subject that he observed a group of natives come to the mound with a look of sorrow. They remained for a time before continuing on to their destination. 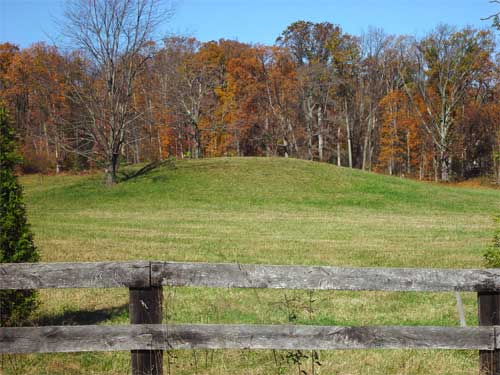 The Graves Are Distributed & Dispersed

While some burials, like the mounds, are easily identifiable, many individual graves are spread out without markings. This means in a town like Williamsburg they are occasionally stumbled upon during construction projects. One well-known instance of this occurred in the 1940’s during the construction of the Colonial Parkway.

In order to connect the three locations of the Historic Triangle a parkway was proposed, but W.A.R. Goodwin, the man credited with beginning Colonial Williamsburg, did not want a modern road cutting through the center of the restored town. He suggested that a tunnel be carved under the city instead. His idea was accepted and so the tunnel was built under the Peyton Randolph house.

During construction two native American graves were discovered and destroyed. Sadly, this was a common practice during the early days of the Historic Triangle – preserve everything involving the English settlers but everything else is optional at best. Some believe that these destroyed native graves are the cause of the Peyton Randolph house’s frequent, and occasionally hostile, hauntings.

Hopefully, unlike the English Settlers of the 1600’s we can continue to learn and appreciate the nearly forgotten colonial Powhatan. If you would like to help support the modern Powhatan tribes, learn more or donate at the following links:

“Ethnology of the Powhatan Tribes of Virginia.” https://www.accessgenealogy.com/native/ethnology-powhatan-tribes-virginia.htm 2016. Web. 6 December 2016