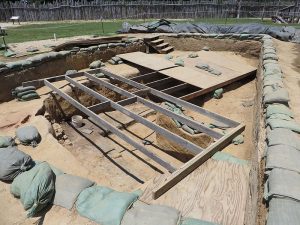 Jamestown was the first permanent English colony in North America, and it seemed to have been cursed. A few short years after settling up a Fort along the James River, many disasters caused the “Starving Time.” The winter from 1609-1610 killed most of the colonists, and those that were to survive had to make some hard choices. Though alluded to in letters and diary entries, there was no evidence of cannibalism at Jamestown during this harsh winter until discovering a skeleton named ‘Jane.’

The Cannibalism: Trouble at Jamestown

During the spring of 1607, three English ships, the  Susan Constant, the Discovery, and the Godspeed with 104 colonists, arrived from England. They sailed along the Chesapeake Bay before attempting to move farther inland along the James River. They established the New World’s first permanent colony, Jamestown, on a narrow peninsula along the river. It consisted of a fort, a storehouse, a church, and houses built with local wood. A sizeable spiked fence surrounded the fort for protection.

The colonists built their fort on marshy ground, meaning they were in the middle of a mosquito-infested swamp. The soil was no good for growing crops. Arsenic runoffs (from a tar pitch swamp) and human waste polluted the water. Water in the original wells was tested and was determined to have been too salty to drink in the summer. Disease ran rampant through the colony in the first short years due to the contaminated water.

The colonists’ arrived during a 7-year long drought, the worst in the area for almost 800 years. Cedar tree trunks that were old enough to have been growing during the early 1600s were examined. They showed through their rings’ thickness in their trunks that the area was suffering under a severe drought.

Due to their inexperience in growing native crops and the drought, the colonists struggled with food and other resources. Their leader, Captain John Smith, managed to negotiate trades from the local Native American tribes, such as the Algonquian leader Chief Powhatan. Trading with the locals and depending on resupply ships kept the colony going until 1609, when the vessel before winter went down.

The drought in the area meant that the Native Americans had to focus on feeding their peoples first and could no longer help the colonists. Relations with the local tribes that made up the Powhatan Confederacy became hostile.

Captain Smith would suffer a terrible gunpowder injury and had to return to England for medical treatment. He never returned to Virginia. That winter, the “Starving Time” happened. By the end of the winter of 1610, disease and starvation killed up to 80% of the colonists.

The winter of 1609-1610 became known as the “Starving Time” when mentioned in diary entries and letters. The marshland and poisoned water supply meant they could not grow crops. They also could not trade for food with the local tribes because of food scarcity.

With no crops nor trading partners, the colonists became desperate. They ate their horses and dogs’ supply until even the rats and snakes in the area were gone.

In 1625 George Percy was the governor of Jamestown during the “Starving Time” and wrote a letter detailing what he witnessed there.  He explained that they were glad to eat the dogs, cats, rats, and mice in the area after they had eaten their horses. They also ate their leather shoes and any other leather they could find. Some desperate people even dug up corpses to eat, and some even licked the blood that came from their weakened neighbors.

There had been references to cannibalism at this time but no physical proof. In 2012, the remains of a 14-year old human girl were found in a debris pit with horse and dog bones. All carried the tell-tale sign of being butchered.

Forensic scientists at the U.S. Smithsonian Institute released a report detailing what could very well be the first instance of intentional cannibalism in an English colony.

The Discovery of ‘Jane’

Desperation can make even the most taboo of norms take the backseat to survival, which seems to be the case with Janie.’

She was discovered during a 20-year long excavation of the fort by a team headed by William Kelso. Kelso worked from the Jamestown Rediscovery Project at Preservation Virginia. James Horn, the Vice President of research and historical interpretation at Colonial Williamsburg, also worked with Kelso’s team.

They had been excavating an old cellar that held the butchered remains of the bones of dogs, horses, and a partial human skeleton. Kelso discovered parts of a skull, lower jaw, and a leg with butcher marks, just like the animal bones.

The team did an isotope analysis on her bones to discover there was proof that she had regularly eaten better food than most of the other colonists. Examining her dental remains and bones showed evidence that she ate a high-protein diet.

While she could have been a maidservant, the protein suggests she was a gentleman’s daughter and one of the colonists. She had probably arrived on one of the supply ships that came in 1609. There was no evidence of murder, luckily; it seemed that other colonists scavenged her remains after she died of natural causes.

What Happened to ‘Jane?’  Was it cannibalism?

Owsley’s experience comes from a mix of skeletons from archeological digs and ancient sites and from working with the FBI. He was one of the physical anthropologists who examined some of the victims from the 1980s serial killer and cannibal Jeffrey Dahmer.

He’s estimated to have examined over 10,000 bodies during his career. His experience meant he could give a reasonably accurate representation of what had happened to ‘Jane’ by looking at the clues she had left behind.

Her Remains Held The Answer

All her remains (a skull, leg bone, and lower jaw) showed clear cleaver or ax marks. The marks on her head were consistent with a desperate but inexperienced butcher. The brain, tongue, cheeks, and leg muscles were consumed, with the brain being the first thing removed because it couldn’t be preserved and decomposes quickly after death.

The front of her skull has several cuts from attempting to get to her brain, and her lower jaw has cut marks, showing clear intent to remove all the flesh from her body. She must have been dismembered close to her death. There are several recipes for animal brains at this time, so her brain may have been prepared the same way.

Owsley was able to tell from the marks that the butcher was hesitant and made several weak hits to certain areas. The hesitance could be from an inexperienced butchering game and the fact they were cutting up one of their neighbors. Even in desperate times, cannibalism is still one of the worst Western taboos. It must have taken quite a strong will to survive to decide they had to eat a former neighbor.

Since the hostilities with the Native Americans meant the colony was under siege, most male colonists were killed if they ventured outside the fort’s walls. If true, that may indicate that the ones who butchered Jane were other women, explaining the cuts’ inexperienced and tentative nature.

He suspects that there were multiple butchers involved with Jane’s body because her leg cuts are more confident and precise than other cuts on her head.

The Future of ‘Jane’, From Cannibalism To Face

Archaeologists William Kelso and Owsley worked together and presented a program showing a reconstruction of Jane’s face. They used CT scanning and computer graphics to show Jane’s possible face for the first time in over 400 years. She was a pretty young girl, and it was sad to see her tragic fate in Jamestown.

Unfortunately, Jane probably wasn’t the only victim cannibalized, but there hasn’t been any evidence yet. It’s just a matter of time before more victims are found from the Starving Time.