The Tale of Lucy Ludwell – Paradise

THE TALE OF LUCY LUDWELL-PARADISE

We’re going to scour the history of ghost stories and ghost tours from all over Virginia, but, today, Williamsburg will furnish us with yet another tale of the human spirit. Last time, we discussed a ghost story that froze a moment in time with the signs of a lady’s life. Now, we’re going to look at another moment in time that is being repeated through history. This is the story of Lucy Ludwell Paradise, her home and a wet, dripping sound. It’s often featured in ghost tours in Williamsburg and is one of the popular haunted locations in Williamsburg.

Welcome back to the streets of Colonial Williamsburg. The Ludwell-Paradise House was the first place that John D. Rockefeller Jr. and Reverend W.A.R. Goodwin obtained when they launched the restoration project. Its Georgian architecture was bricked together in 1755 for Philip Ludwell III. Here it is, nowadays, standing on the north side of Duke of Gloucester street in Williamsburg, Virginia: 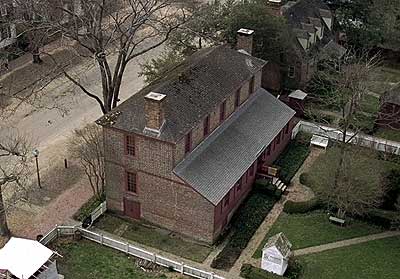 There’s plenty to be said about this man, but our story is focused on his second daughter, so let’s skip forward to his death. In 1767, his health failed him and he passed away in London. Our dear Ludwell-Paradise house was inherited by Lucy.

Lucy (Ludwell) lived lavishly in London with her husband, John Paradise, so her Williamsburg home was rented out to residents when the Paradises were away. While she was in London, the house enjoyed a colorful history, including the American Revolution, a decades long legal battle and a gaggle of interesting tenants, but that’s just the house. Let’s get back to Lucy and John.

John Paradise was a noted linguist and scholar, as well as a friend to many an important person, including Thomas Jefferson, but history notes that he and Lucy were financially unsuccessful. As a result, his death in 1795 left Lucy destitute. With few resources at her command, in 1805, she returned to her Williamsburg home. It is there that the incidents are said to take place.

The Incidents: At the Ludwell-Paradise House, Attributed to Lucy Ludwell – Paradise

(The incidents reportedly associated with Lucy’s phantom vary, but they all agree on the same sounds)

The Ludwell-Paradise house is a private residence, but let’s say you lived in the house. Today, you had a short drive home, because you’re just off the main road and traffic was light. Your stomach and mood are telling you that it was a long day, so you head into the kitchen for a glass of water and some food.

As you’re about to turn on the tap, you hear a splash. Your brain’s a bit groggy, but you realize that the water is supposed to come before the splash at the same time you remember that you’re alone in the house. Someone, somewhere in your house, is having a bath.

The sounds of droplets cascading off an arm into a tub full of water are hard to mistake. Yet, there must be a mistake. There’s no one else here, today. Who, but you, could possibly be bathing in your house?

Maybe someone you know came over while you were away. You vaguely remember giving a copy of the key to a neighbour when you were going on vacation, but you’re pretty sure you got it back. In this moment of loneliness and panic, you’re no longer certain. Maybe they made a copy. At the same time, you’re living in a haunted landmark, so who knows what strange reasons someone might have for breaking into your place. Now, you’re afraid. It could be anyone.

In the back of your mind, where terror drives unbridled inquisition, you begin to remember the story of Lucy Ludwell-Paradise.

Lucy was a member of London’s social elite. She was unconventional and a little mercurial, but her status and social savvy helped people accept her eccentricities. That is, until her husband died. Then, she had no way to make a living or support her social standing. She was left bereft, but she struggled on. After a few years, she sailed to the new world, where her old house awaited her.

But, so did her old life. Mired in some imagined lifestyle, she continued to fascinate the people around her. However, with time, they became less forgiving of her unusual behavior. For starters, she was a suspected thief. That had to have made them suspicious. After that, perhaps, they started to wonder why she would strut around the streets with her servants, greeting passer-bys as if she were royalty. Come to think of it, why on earth did she conduct carriage tours that never left her back porch? And why did she bathe so much?!

It took some time, but, eventually, the people of Williamsburg decided that all of her unusual behavior could be explained by the fact that she was weird, more specifically: insane. Whatever they suspected her non-specific condition to be, in 1812, it was clear to them that she had to be committed to the Public Hospital for Persons of Insane and Disordered Minds. They ripped her away from her house and brought her to the Public Hospital. There, she was entombed for two years.

The mind is a complex thing. Even today, our understanding of how the brain works is limited, and treatment methods are limited by our understanding. By today’s standards, early nineteenth century treatment methods bordered on barbaric. Patients were drugged, restrained and subjected to shock-treatment. And those were the progressive institutions. Yet, those institutions did progress, so it’s difficult to find out exactly what Lucy might have experienced within her brick mausoleum. It wasn’t pleasant, though.

Two years after she was confined within the Public Hospital, she committed suicide. Now, her ghost is said to haunt the upper floor of the Ludwell-Paradise house, endlessly bathing arms that no longer exist, leaking the sounds of her watery repose into the empty rooms of her house.

Those sounds support a long and tragic tale, but how much of it is true? A disturbing amount. Part of the reason her ghost was so readily identified was that so much of her life was chronicled. That, combined with the macabre nature of her end, allows the sounds of bathing to readily evoke her memory. However, the ghostly construct of our tale may not necessarily be the Lucy Ludwell-Paradise that belongs to history. So, let’s get back to her.

Lucy Ludwell was called many things: imperious, beautiful, handsome, eccentric, of unsound character, an elegant lady of fashion… So, it’s hard to figure out exactly who she was. The best we can do is to try to imagine her as a complex person within her circumstances.

She was born in 1751, in Greenspring, near Williamsburg, Virginia and sailed for England with her family in 1760. They settled in London, where, in 1769, she married John Paradise of Rathbone-Place. As a couple, they were members of the London elite and moved in social circles that included Samuel Johnson, Benjamin Franklin, Arthur Lee and Thomas Jefferson. Despite their associations and her dazzling social flair, things did not go smoothly for Lucy.

When John Paradise died, in London, on December 12, 1795, Lucy was left with no viable way to make a living. The social fabric of her society wasn’t set up to provide her with that opportunity. So, basically, she had to survive on whatever she had: the Ludwell-Paradise House and her reputation.

Yet, her incarceration in the Public Hospital looms over every detail of her life. It begs the question: when did she begin losing her senses? Or, more fundamentally, was she truly disturbed?

Was She Truly Disturbed?

Discovering the answer to that question would require a deep psychological analysis, but the psychiatry of her day was disturbingly primordial. In the late eighteenth century, shackles and chains were still being used to confine patients. Still, that’s not that surprising when you consider that, as late as 1770, Bethlem let the public wander its wards to gawk at the patients. Then again, that’s also a marginal improvement over the even older strategy of kicking people out into the wilderness.

The Public Hospital was a progressive institution, but, progress is relative. It was still bad. It’s even tempting to blame the institution’s horrendous conditions for her eventual self-termination, but that’s a disingenuous representation of the facts we have before us. We don’t know the facts of her mind, just the facts of her time. We can’t say why she chose to take her life, but we can’t abandon her at the doors of the asylum, either. So, let’s look at what her life might have become.

We know that, during her life-time, “Treatment consisted of restraint, strong drugs, plunge baths and other “shock” water treatments, bleeding, and [the application of] blistering salves.” (see above link) However, the nineteenth century was a time of experimentation in early psychiatary, so it’s difficult to discern exactly what Lucy experienced in the asylum. We do know thatthe method used to diagnose her was rudimentary. (Three Aldermen concluded that she was insane.) We also know that, once she was in the hospital, she would probably never get to leave again.

That’s a terrifying reality. It means that the last years of her life are completely shrouded in darkness. It begs the haunting question: how will she be remembered? Will it be for her disinterest in literature, her fantastic style or her bathing habits? She lived an exciting life, but stories don’t save all the details: they simplify lives into understandable quantities. So, it depends who you ask.

The Sounds of Bathing

We’ve discussed Lucy’s home, her life and her incarceration, but we haven’t focused on the sounds of bathing, because they exist at the epicentre of the entire tale. They are the human element that links the story together. The quiet dripping sounds in the night remind you that she was once there. However, those sounds are not Lucy any more than her history is.

In the story, she was supposed to have bathed many times a day, but the sounds are transient. In our incident reports, they’re rarely heard more than once, but they’re an echo that serves to exemplify her memory. Those sounds represent her odd habits, and her habits were used to prove her insanity. Because she was labelled insane, she was entombed until her death. Those sounds are her death knell echoing through history, but, while we think of them, we remember her name.