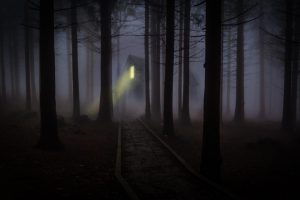 The Insane Stories from the Old House Woods, Mathews, VA

In Mathews County of Virginia, off the coast of Gloucester, is the small, unassuming town of Diggs. It’s a cozy little place, surrounded by the Chesapeake Bay, offering coastal views and respite. It seems normal, boring in fact. But don’t let the views fool you!  For if you travel down the Beach Haven Road just outside of town, you come to a 50-acre patch of dense woodland. The Old House Woods is so full of paranormal activity and apparitions that it may be the most haunted woods in America. Where else can you find ghost pirates searching for their lost gold?  British Redcoats stalking the night?  Armored skeletons asking for directions and even…headless ghost cows?

Okay, let’s DIGG into these creepy legends, shall we?

The Many Legends of the Old House Woods

The Forest and the Frannie Knight House

The Old House Woods was a scary place when the colonists came to this country. The dense woods along the ocean were so thick the sky couldn’t be seen through the tree limbs. It was the perfect port for men to hide and lay low from the law. Thieves and pirates were so notorious in the area that travelers were warned to stay away from the woods. The woods were used as a secret port by both Revolutionary sailors and Civil War ones.

The woods were filled with stories of thievery and murder before the first incident even occurred.  The name Old House Woods actually reflected the fact that in the late 1700s an old colonial building stood in the middle of the woods. It was abandoned and believed to be full of angry spirits. The house, called the Frannie Knight house, spontaneously caught on fire.  Then, it to put itself back out with no intervention. Years later, the same house caught fire again.  But, this time it allowed itself to reduce the house to dust. The forest has since taken the house’s remains back.

In the 19th century, a fisherman named Ben Faribee coming out from White’s Creek claimed he saw a huge, 3-masted ghost galleon out on the water. It had lit lanterns along its deck and spectral men aboard, looking off into the distance. The ship was heading straight for him, but his calls were ignored. At the last moment when there should have been an impact, the ship simply floated over his head and continued to hover up to the beach.

There was a sound of a harp after the ship passed, and Faribee watched in terror as the ghost ship floated up over the trees of the forest. It stopped above the pines and he claimed to see rope ladders thrown over the sides.  Men with “tools and other contraptions,” climbed down to disappear into the woods below.

This strange ship is not the only one to be seen, and it sometimes is seen floating at least fifty-feet over the ocean’s waves. A mysterious fog hides the ship.

In the middle of the woods in White’s Creek, and one legend states that in the 1600s, a band of pirates buried their loot somewhere along its banks. Unfortunately for them, a huge storm kicked up and flooded the entire creek, washing the men out to sea. Unwilling to give up their treasure, the ghostly pirates have apparently been seen searching the creek at night ever since.

The next story involving treasure includes a treasure ship belonging to King Charles II sent from England to America in 1651 in the wake of the Battle of Worcester. If he was forced to flee England, he wanted to make sure he had resources to restart his life in the colonies. The story goes that as the ship was on its way to Jamestown, a storm forced it off course and it ended up White Creek.

There, the ship was attacked by bandits, who killed the crew and managed to move the loot into the forest. From there, they were either killed for their crimes, or their ship sank at sea. Now it’s believed that ghosts of the crew try to protect the buried loot while ghost bandits try to dig it up. It’s said they can be seen carrying lanterns that glow green at night.

Finally, a group of British Redcoats is seen carrying lanterns and digging in parts of the forest. Some stories suggest that in the Battle of Yorktown in 1781, General Charles Cornwallis had soldiers hide a fortune of gold in the dense patch of woods. Unfortunately, they were said to be captured and arrested, thus leaving the loot behind. The ghostly Redcoats may be searching for their general’s horde.

One creepy story states that a duck hunter named Henry Forrest was hunting in the woods when he saw black shapes on the water of White Creek. As he said his gun to fire at what he thought were ducks, the black blobs shifted into the forms of several angry-looking Redcoat soldiers! So scared, he ran through the woods back to his boat, only to find another ghostly Redcoat waiting in it for him.

When he threatened to shoot the spirit, it told him “You shoot and the devil’s curse to you and your traitors breed.” He tried to pull the trigger but his gun refused to fire. After trying and failing another shot, he threw his gun at the ghost and ran away in terror.

The Portent of a Storm

Not just ghosts of sailors and soldiers aunt the Old House Woods. A female apparition in a white gown, who glows an unearthly green or pale blue, will rise above the woods at night. She’ll let out an unearthly scream, a portent to sailors out at sea of a terrible incoming storm, and to evacuate the area. She’s become known as the “Storm Woman.”

Ghostly animals haunt the woods as well. There have been multiple reports of black horses that attack people in the woods. Ghost crows will cackle and screech from the tree canopy.

Two black ghost dogs will chase trespassers away. They’ll pounce at people, and even have been known to jump into the beds of trucks, leaving deep claw marks before disembarking. The sounds of their howls are enough to cause fearless men to shiver.

If the angry phantoms of Black Dogs don’t work, then the woods will send out the big guns: phantom headless cows.

Perhaps the strangest stories on this list include two separate incidents in the Old House Woods. In 1926, a man named Jesse Hudgins reported that a group of strangers with lanterns approached him. As they got closer, he was able to make out that they were wearing some type of old armor.  The wearers were nothing but animated skeletons underneath! One pulled out of a large, ancient sword and waved it at him in a terrifying manner, causing him to flee for his life.

The second incident took place on the road leading through the woods. A man had car trouble in the middle of the night and was stuck. As he was trying to fix it, a figure that he described to be a skeleton wearing old armor, strode up to him with purpose and asked “Is this the King’s highway? I’ve lost my ship.” The man was so scared he ran away, leaving his car behind.

People who have lived in the area of the woods say they haven’t experienced such ghostly shenanigans. The scariest thing they have to deal with is the enormous mosquitos that come from the marshes. Many think the stories are just creepy urban legends to keep people off of private property (which the woods are, now).

However, paranormal investigators do get evidence in the woods of something: electronic voice phenomenon (EVPS) of unsure animals and people have been captured. Pictures and videos of creepy things are all over the internet.

Still, an urban legend is defined as a story that grew from a kernel of truth. So, what was the starting point of all these insane tales?

Maybe you should come to the Old House Woods and find out for yourself (after asking the owner’s permission, of course.)

Interested in taking a walk through the history of the ghosts that haunted America’s first Capital? Check out Colonial Ghosts for information on the best Colonial Williamsburg Ghost Tour here: