The Ghosts of Yorktown

Ghosts of Yorktown: A Brief History

Yorktown is one of America’s oldest and most historic cities. In the 1700’s, the nearby York River provided easy access to ships carrying slaves and goods from other countries. People from many walks of life flocked to the city, creating a dangerous atmosphere. Criminals, sailors, and drunks walked the streets of Yorktown waiting for ships.

Yorktown is also famous because of what has come to be known as The Battle of Yorktown. In early October 1781, General George Cornwallis marched Northward with his 8,000 British troops. When they reached Yorktown, they set up camp to wait for British reinforcements. As history reveals, this proved to be a fatal mistake. General George Washington was aware of the British troops residing in Yorktown and took advantage of the opportunity.

The American and French soldiers joined forces and surrounded the British, both on land and at sea. In an act of desperation, Cornwallis and many of his men tried to escape through the York River, leaving the injured behind. The attempt failed and Cornwallis had no choice but to surrender. On October 19, 1781, British troops signed a treaty.

Throughout history, many tragedies have befallen the streets of Yorktown. The town has become one of the most well-known American cities—as well as the most haunted. The Americans, British, French, and Germans, as well as the citizens of Yorktown, all lost people in tragic deaths. Even more occurred during the Civil War.

Many witnesses have reported seeing and hearing strange phenomena in Yorktown’s houses, streets, fields, and woods, with no logical explanation. The ghosts of Yorktown mourn the loss of loved ones, or are just lost themselves, and roam the streets for something they will never attain.

Cornwallis’s Cave, The Ghosts of Yorktown

When the American and French armies attacked Yorktown, many of the soldiers and the citizens of the town took refuge in various places. One of these places is known as Cornwallis’s Cave.

It has not been proven that Cornwallis was present in the cave, only rumored. Records of the cave date as far back as the eighteenth century during the pirating days. Smugglers would often use the cave as a hideout. There are also rumors that the cave was used as a place for satanic worship and rituals in the 1970’s.

Throughout history, witnesses have claimed to have heard strange voices and sounds coming from inside; men’s voices, whispers, moaning, and even the reciting of incantations. They insist that there is something evil inside. What is in that cave will never be known because officials have closed it off to tourists. However, one can still peek inside or hear those strange sounds.

Thomas Nelson was very influential and well-known in the 1700’s. In addition to a successful merchant and general during the Revolutionary War, he also signed the Declaration of Independence and became the third governor of the Commonwealth of Virginia. In 1766, Thomas inherited his father’s house and owned it during the siege of Yorktown. He lived in the house with his wife, Lucy Grymes, and their eleven children.

When British troops invaded Yorktown, Cornwallis took refuge in Nelson’s house. When Nelson found out, he gave orders to bomb it. During this bombing, many British soldiers lost their lives. One soldier, in particular, was on a stairway that is currently off-limits to visitors today. The soldier has made his presence known throughout the years.

In the twentieth century, the owner at the time was hosting a luncheon. Guests began to ask her about the supernatural presence in her house, which she denied. Suddenly, the door leading to the stairway opened with abrupt force. It was so strong that the room started to shake, something crashed into the sideboard, and several dishes shattered on the floor. 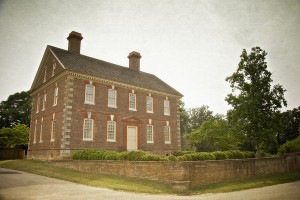 The Civil War, Too

In addition to the siege in the Revolutionary War, the house also experienced the horrors of the Civil War. The house was used as a hospital to care for wounded soldiers, with the fatally wounded being cared for in the attic. Many surgeries were performed in this house, resulting in the repugnant odor of decaying flesh. In one specific case, a soldier fell in love with the nurse that was caring for him. Unfortunately, he died before the two could be together. Witnesses have reportedly seen his ghost from the window in the attic, fuming and covered in blood.

In later years, ruins of another house on the property were found. During the siege, cannon fire destroyed the house, resulting in the deaths of a number of British troops. Witnesses have claimed to have seen figures of men dressed in red dashing throughout the grounds, ducking behind trees. They appeared to be hiding from enemy fire, unaware that they perished over two centuries ago.

On October 19, 1781, one of the most notable events in American history took place at the Moore House. The British admitted defeat and signed a treaty, giving Americans their independence. However, the affairs leading up to this monumental event in historywas marred by tragedy. Bombings destroyed over half of Yorktown and many people were killed. 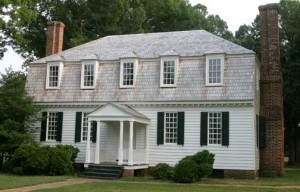 One of these unfortunate souls was a man named John Turner. On October 13, 1781, during an attack, Turner was wounded. He was rushed to the Moore House and was tended to by his wife, Clara. Sadly, Clara couldn’t save her husband and he was pronounced dead. His wife’s grief was so great that she died of a broken heart. While Turner’s relationship to the Moore family is unknown, his body is buried on the Moore house grounds.

Witnesses have reported seeing a crying woman, wearing a long dress, on the Moore house grounds. It’s believed that this is the ghost of Clara Turner, still mourning the loss of her husband.

Built in the early eighteenth-century, Dudley Digg’s house is one of the last two colonial wooden houses still standing. Inherited from his father Cole Diggs, Dudley lived happily in this house with his wife, Martha Armistead, for years.

Tragedy struck, however, when Martha died during childbirth. Dudley mourned her loss but remarried a woman named Elizabeth Wormley years later. He had nine children with her and had a successful professional life. As a delegate for York County for 25 years, he was close friends with Patrick Henry, and the two would often protest English rule. 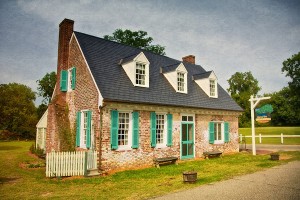 Even though he succeeded in life, he never forgot about Martha, and would often pray to her in times of trouble. This remained the case until his death in 1790.

In 1960, when the house was renovated, workers heard cries coming from the back bedroom. After quietly sneaking up to the room, the horrified saw a woman hovering above the bed in a blood-soaked nightgown.

Since then, other witnesses have reported experiencing supernatural phenomena while near the house. Witnesses say that Martha pleads for help, while holding her arms out.

When the British signed the treaty for surrender at the Moore house, townspeople and soldiers gathered to witness this historic event. The mood among the British soldiers was a somber one. The tired, sick, and saddened soldiers had mixed emotions about the signing. The British band began to play a song called, “The World Turned Upside Down.”

At what is now known as Surrender Field, visitors have heard this song being played with no musicians present. The song reportedly plays for hours reminding tourists of that historic day.

In addition to the mysterious music, witnesses have reported hearing cannon fire and seeing ghosts resembling colonial soldiers. It’s rumored that one of these ghosts is George Washington’s stepson. Born to Martha Washington, JohnParke Custis (known as Jacky) skated through life, living off his inheritance and failing at nearly everything he tried. He was flighty and Washington spent a lot of time cleaning up his messes. Wanting to prove himself to his stepfather, who reportedly loved him dearly despite his misbehavior, Jacky enlisted in the Continental Army as they were headed to Yorktown. 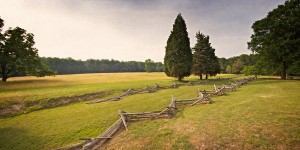 Unfortunately, because of Jacky’s pampered lifestyle, he found it difficult to adjust to the life of a soldier. He was constantly surrounded by many horrors, including blood-soaked fields, cannon fire, and death from disease. Jacky ended up falling ill and was unable to move from his bed. This prevented him from going back into battle, even though he desperately wanted to. Constant attempts to cure Jacky failed and he died at the age of 28.

At night, in the woods and on the field, a man can be heard reportedly calling out for guidance. Witnesses have claimed to have seen a man running through the grounds aimlessly and frantically. It would seem that, even in death, Jacky still wants to please his stepfather.

Read about more hauntings on our blog, or continue with…

Yorktown was a busy city in the colonial era because it was the primary port for ships. Among the many ships to travel the waters of the York River were the slave ships. When slaves were transported to auction, they were all forced to walk the Great Valley Road. If they fell from exhaustion during this journey, they were beaten to death.

People have reported feeling an overwhelming sense of sorrow when traveling down this road. On one occasion, a girl-scout troop was traveling down the road. They were all laughing and enjoying each other’s company, when suddenly, they all started crying uncontrollably. When the crying stopped, none of the girls could explain what had come over them.

The Swan Tavern was a popular place in the eighteenth-century to eat, sleep, drink, and grab a newspaper. However, the tavern was destroyed during the Civil War. While the tavern has since been rebuilt, it fails to capture that colonial-era charm that it used to have.

When excavating the property in 1935, a human skeleton was found. Whose skeleton it was is unknown. However, when walking the grounds, witnesses dating as far back as 1877 have reported seeing a cloaked man appear and then disappear before their very eyes. Historians theorized that this person could be one of many that were robbed and killed for their money. This was an unfortunate, but common occurrence in Yorktown at the time.

In the colonial era, Yorktown was a busy, bustling city. Its streets were crawling with all sorts of people from all walks of life. The siege in October 1781 changed all of this. After the battle, many lives (soldiers and civilians) were lost, and over half the town was destroyed.

Many locals believe that the souls of these poor people still roam the Yorktown area. Witnesses have seen and heard strange things in houses, fields, and taverns throughout Yorktown. Do you believe in ghosts? To be sure, why don’t you take a trip to Yorktown?