Sleep With Ghosts of Williamsburg

Sleep With Ghosts of Williamsburg

Ever wanted to sleep with ghosts of Williamsburg?  They say Virginia is for lovers, and it is a great place to vacation. But wouldn’t you like to sleep around the ghosts of Williamsburg? Unless you are taking a day trip, most vacationers need a place to stay overnight and up to a week. That would include hotels, motels and bed and breakfasts. Unless the potential guest knows the history of the place, they might find more than a good sleep and a ghost tour at many of the locations in the Commonwealth.

They might just discover unseen visitors trying to share the bed with them. I’m talking ghosts here. Colonial Ghost tours are popular in Williamsburg, as one can see hundreds of visitors embarking on a tour to hear one of 20 scary and true stories. Others hope to catch a glimpse of something more, while a select few relish the thought of a closer encounter with the paranormal at a bed and breakfast or hotel.

Virginia has quite a few haunted accommodations. Some have just one room that is haunted, others, the whole hotel. Bed and breakfasts are where you get to sleep in a room and the next morning are served a nice, hot breakfast by the owners. There are those that have more than wonderful hosts and a lovely setting, they have phantoms. So, is it sugar and cream with your cup of coffee, or a headless ghost wandering by?

Though there are so many places to talk about, I will stick to the ghosts of Williamsburg and surrounding counties.

Williamsburg is a wonderful town to visit. It has plenty of places for people to stay, so after a day of tromping through Colonial Williamsburg, Busch Gardens or Jamestown, they can be assure do a good night’s sleep. Really? I am sorry to say, many of these places have spooks.

Many hotels dot the landscape along Richmond Road in Williamsburg, Those staying in these buildings tell of seeing soldiers passing through their rooms. One woman on a ghost tour turned white told of her own experience. She had gone to get some ice and when she returned to the room, a Confederate soldier walked by her in the hall.

He passed through the hotel wall and vanished! Another couple staying in a hotel woke up to the sound of someone going through their suitcase. They lay there frightened. Then the husband turned on the light and they found clothing from the suitcases scattered across the floor.

Not just along Richmond Road either, Fort Magruder Hotel and Conference Center on Pocahontas Trail is haunted by many lively and um, ‘spirited’ phantoms, mainly of the Civil War era. As someone who has stayed there and even investigated with ghost hunting equipment, I can attest to that. 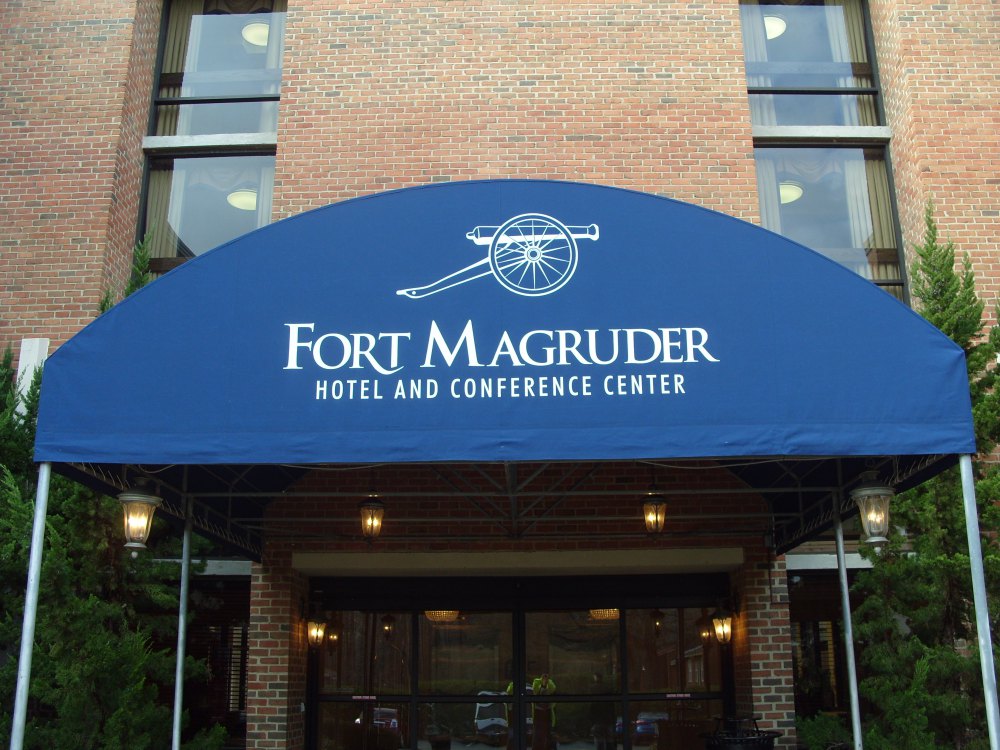 Many of those working there have had their own experiences, as have guests. A woman who worked in the dining room never saw a ghosts there, but told me that some guests have come to breakfast the next morning, telling her they have asked to be let out of their room after waking up to a Confederate soldier sitting on their bed. One area of the hotel is more haunted than the others—that those near the New Market Hall (which is also haunted).

People talked of having an invisible someone run past them on the third floor late one night, valuables disappearing and reappearing in a spot the people have search at before, the machines in the game room keep being straightened, only to be found moved crookedly, and things moved. Figures have been seen and voices heard, not just inside, by outside by the earthworks. For this hotel is in the area where the Battle of Williamsburg happened and skulls and Civil War stuff found when one part of the hotel ground was dug for a garden.

Rooms open to balconies or patios. The 303 air-conditioned guestrooms at Fort Magruder Hotel and Conference Center include complimentary newspapers and coffee/tea makers. Just be assured you might get your very own entity when you rent a room at the hotel.

Colonial Williamsburg is haunted. Some locations not currently covered on Williamsburg Colonial Ghost Tours are the Brick House Tavern, Market Square Tavern, and other locations listed below.

The Brick House Tavern, where one can stay as an alternative to the Colonial Williamsburg hotel, has reports of paranormal activity. It is located on Duke of Gloucester (DOG) Street. It has sixteen rooms; all have private, full baths. The Brick House has always been used as lodging. In 1770, the innkeeper, Mary Davis, advertised “12 or 14 very good lodging rooms” and also noted that the first-floor rooms were reserved for ladies and the rooms above for gentlemen.

That meant that for the price, you were entitled to a meal and a place to sleep. That did not mean you would have a private room, not even a private bed for that matter. The standard price meant you would be sleeping with perfect strangers, in the same bed, in a room that would house about twenty people. If you had enough money to pay for “private accommodation,” you would sleep alone in your bed, but there would be multiple beds in the same room. Though supposedly you sleep alone in your bed at the building now, the spirits still seem to want to do it like it is 1770, and share the bed with you!

Stamping of footsteps are heard, the sweet odor of tobacco smelled (and it’s a non-smoking building!), keys jangling, shadowy figures seen, lights turned on and off, faucets played with, and one woman mentioned about a man’s “stink.” When this woman woke up and saw a man in breeches and long, greasy hair, she felt sorry for him, until he tried to kiss her!

Market Square Tavern is located on the Duke of Gloucester Street in Colonial Williamsburg, next door to Market Square and the Magazine. It has operated as a place of lodging since the eighteenth century. There are eleven rooms in all. Tapping from inside the walls have been heard by guests over the years. Is it by paranormal means, or animals inside the walls? It is next to grounds, which has the magazine on the other side.

This spot held the Greek Revival Church, scene of horror during the Civil War. Many body part amputated in that church. Over two hundred bodies were buried in a mass grave—and are still believed to be buried there today. It was a hellhole of a place. Though the church is no longer there, spirits of wounded soldiers are seen roaming the place and their cried of anguish have been heard.

Charles City is where you can tour plantations, Plantations like Berkeley, Weston, and Shirley. There are also bed and breakfasts you can rent a room for a night or two. Like North Bend Plantation and Edgewood Plantation. Just be forewarned, that you might not be the only person to use that room at night.

Sleep With Ghosts At Edgewood

At Edgewood, besides the ghost of Lizzie Rowland, daughter of Spencer Rowland who had built the house, it has been confirmed by paranormal investigators and even yours truly, that a little girl haunts the place. Along with a ghost dog outside, back of the house that yours truly got a photo of. Being that where the house had been, the land held shacks of the slaves of Berkeley Plantation. Could the little girl be a slave child? 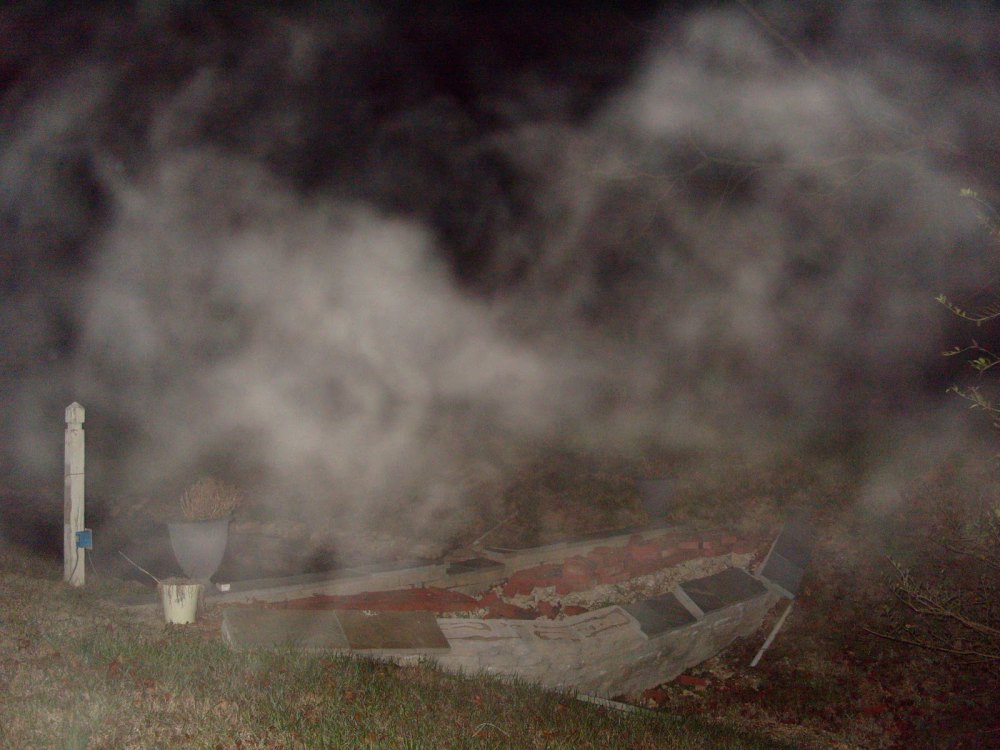 As for North Bend, in the past footsteps have been heard. It was thought to be General Philip Sheridan. Is it? I don’t know, though I know he still haunts Weston Plantation House in Hopewell, Virginia, where he stayed at one point during the Civil War.

Sleep With Ghosts at Boxwood Inn Bed and Breakfast

Boxwood Inn Bed and Breakfast in Newport News has seven spirits haunting the building. The energy connected to it is strong. How strong? Strong enough to drain new batteries in my camera after one picture taken back in April 2014, during the paranormal event held there, Paracon.

Boxwood Inn is within easy reach of Williamsburg, Newport News, and Yorktown, in Historic Lee Hall Village. It is a lovely bed and breakfast with the front facing train tracks. The train did stop there, in fact. In its past, it was once upon a time the home of Simon Curtis, son of Dr. Curtis of Endview Plantation.

Built around 1896, it has been the Warrick County Hall of Records, a general store, and a post office. The front door led into the general store, to the post office, and even to Simon’s office. Simon’s wife, Edith’s, family was from up North and into antiques. When the place was empty for ten years and an auction held of what was inside, they found four million dollars’ worth of antiques!

Edith spent her last days there with a nurse who smoked a lot and had a raspy voice. It is said the nurse is another ghost haunting the place. In fact, a couple who one time smelled smoke in the Inn had asked if smoking was allowed there.

Kathryn and her husband, Derek Hulick, along with their daughter and son-in-law, took over Boxwood Inn on December 1, 2000. They didn’t believe it to be haunted, not at first. But soon, with paranormal investigators wanting to investigate it, they learned much differently.

The gentle spirit here is said to be Nannie Curtis. It is said that doors open and close all by themselves. Nannie is also blamed for knocking on doors in the morning. Apparently she does not believe in sleeping late. There are also stories that a phantom of an elderly gentleman with a cane has been spotted.

So stay in this lovely B&B. It’s in a nice spot right by the tracks. Just don’t be surprise when you rent a room there and try to sleep late, Nannie will be knocking on your door to get you up!

Next time you visit Williamsburg, stay in one of the local hotels, motels and bed and breakfasts. But just warning you, don’t be surprise if you find the building haunted. And you won’t be charged extra for the extra unseen person in your room.