Here at Colonial Ghosts, we are students of history.  The history of Williamsburg started in 1492 when Christopher Columbus discovered what was to become America. Adventurers spent the next two centuries exploring this New World with an effort to create a new colony. The land was already inhabited by indigenous tribes; the Native Americans. This didn’t stop other countries from invading. In 1607, the English were the first to establish a settlement in the New World with the intent to stay. 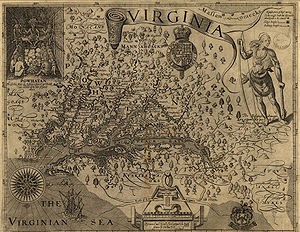 This lead to Jamestown, the first American colony. The growth process was slow and hard, but eventually the colonists established a government and Jamestown as their capital. Jamestown remained the capital for almost a century until major parts of it burned down. As a result, Williamsburg became the new capital.

History of Williamsburg : A Rough Start to Settlement

The desire to establish a colony in North America lead to a very important voyage in 1606. King James I granted a group of investors, known as the Virginia Company, voyage to North America. The goal was to find inhabitable land with an easily accessible route to the Pacific Ocean.

The crew set sail that year aboard three ships; the Susan Constant, Godspeed, and Discovery. Finally, after a long voyage in May 1607, the 104 English colonists landed on the shores of what was going to become Jamestown. The area was perfect because of its deep water anchorage and its good defensive position. They began to set up camp in the New World.

The settlers were confident in their new discovery, but they needed supplies and more people. In the summer of 1607, Christopher Newport went back to England with two ships and forty crew members to report to the king and get the necessities.

When Newport left, the settlers suffered. Many of them were upper-class Englishmen and lacked the knowledge of sufficient labor and farming. The settlers were also surrounded by an unfamiliar climate; they weren’t used to the hot Virginia summers. There was little water, little food, and a constant risk of catching malaria. They suffered greatly from drought, disease, and death; more than half the population died by the end of the summer. In addition to the little resources and disease, the Native Americans were a constant threat.

When John Smith became the colony’s leader in September 1608, things began to change.

John Smith was tough but fair. He established a, “no work, no food,” policy. He was also very instrumental in trading with the Powhatans for food.

John Smith established trading with the Native Americans, resulting in temporary peace between the groups. In exchange for beads, metal tools, and weapons, the English received corn.

However, there were some mixed feelings about John Smith. In the fall of 1609, he was mysteriously injured by burning gunpowder and had to go back to England.

After John Smith left, things got bad again. Settlers began to starve and a period of serious warfare between the Native Americans and the settlers began. Once again, many settlers died and starved and an overall feeling of helplessness overtook them.

In the spring of 1610, when the settlers were about ready to give up, two ships arrived. The ships carried at least 150 new settlers, supplies, and the new governor of the colony, Thomas West, 3rd Baron De La Warr.

When Thomas West arrived, he enforced martial law, stabilized a government, waged war against the Powhatans, and established a new land policy. Under this policy, plots of land were given to the colonists and the Native Americans were forced to move further West.

West’s reign ended when he took ill and had to head back to England. His successor, Sir Thomas Gates began to issue a system of new laws. Among other things, these new laws restricted the interactions between settlers and the Powhatans. Raids against the Powhatan villages were conducted and many Powhatans were killed.

Colonists still had trouble growing crops. In 1613, John Rolfe introduced tobacco as a cash crop and the colonists began trading with England. Rolfe also married Pocahontas, resulting in a brief period of peace between the settlers and the Powhatan tribe. Pocahontas was Chief Powhatan’s daughter and had converted to Christianity. The two married in April 1614 and the marriage allowed the colonists more land to grow their crops. 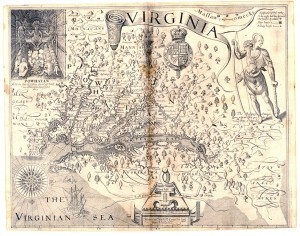 Tobacco became very popular in England. As interest in this crop grew, so did the power to obtain more land and money. Colonists enslaved Africans and forced them to work in the cotton fields.

In 1619, King James founded The Virginia Company to assist in the growth of the colony. They adopted the Great Charter of 1618. Among other things, under this charter, appointed representatives from the new eleven areas of settlement discussed the current issues in Virginia and possible solutions. This made up the first legislative body in the New World and would become a model representation for governments in later colonies. That same year more men, in addition to women and children, arrived to grow the colony even further.

Jamestown was growing more and more by the second. The Powhatans, however, were suffering. The colonists were making life hard for them and they lost two important people. Pocahontas died in 1617. A year later, Powhatan died in 1618. Powhatan’s brother became the new chief and he was more than willing to pay back the settlers for the crimes they committed against his people.

Problems with the Natives

After Powhatan’s death, his brother, Opechancanough, became the new leader of the Native American tribe. The Native Americans were angry about the colonist’s insatiable need for land and the growing colonies. They decided to do something about it. 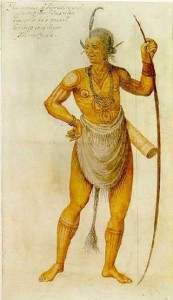 In March 1622, the Powhatans killed around 300 – 400 English settlers in a surprise attack. This was a shock to King James and the rest of England. In an effort to take control of the situation, King James dissolved the Virginia Company into an official crown colony. Jamestown was now the capital of the New World.

Despite the tragedy, in 1630, the colonists expanded their territory to the North and West. The growing community and government were really coming together. In each county, there were various positions in the government a man could hold. The chief justices made up the courts, the sheriff’s enforced the law, and the clerks kept track of the county’s legal records.

Furthermore, the Native Americans continued to attack the colonists but continually failed. In 1644, the Powhatans tried one last time. The attack results in the capture of Opechancanough.

Demand for cotton continued to grow and with the free labor from the slaves, land-owners were turning a serious profit. However, sales started to decline in 1666, growing between the mid 1670’s and declining again between 1680 and 1713. The crown denied the colonists the right to end production of tobacco.

In 1676, a rebellion in the colony led by Nathaniel Bacon sacked and burned much of the capital town.

The rebellion festered from a small conflict between the Doeg Native American tribe and a man named Thomas Mathew. Mathew cheated the Doegs out of a trade. This angered them. In retaliation, they raided his plantation and stole some of his hogs. In return, Mathew and some of the other colonists killed several Native Americans.

The dispute escalated. Instead of giving a full report to Governor Berkeley, the militia officers killed chieftains and members of the Susquehannock tribe. This resulted in the breaking of an established peace treaty 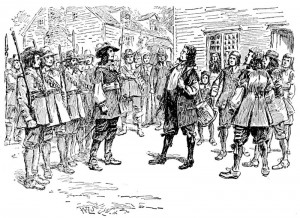 As the retaliations continued, the settlers appointed Nathaniel Bacon (a member of the Governor’s council) to lead them in the attacks. Bacon asked Governor Berkeley to assist in the attacks against the Indians. Berkeley refused and Bacon led his seventy men into battle anyways.

Bacon was arrested in June, 1676. However, the rebellions continued and by September the rebels had burned down most of Jamestown. The revolt collapsed when Bacondied of a fever in October.

As a result of Bacon’s rebellion, chaos erupted in Virginia and England tightened its rule over the territory. To enforce the
law more strictly, the crown sent governors over to challenge the power of
the General Assembly.

In addition to angering the mother country, another fire broke out on October 21, 1698, and Jamestown’s major statehouse burned down. This was the third building that Jamestown established as its statehouse.

In 1699, colonists renamed the area known as Middle Plantation, Williamsburg and America had a new capital.

After this, Jamestown began to slowly disappear and ceased to exist as a town by the mid-1700’s. However, its legacies are still present in today’s world.