The Ghosts of Christmas

It’s the time of the year to smooch under the mistletoe, shop for loved ones, and go view Christmas lights on the Tacky Lights Tour. The season is full of good tidings and happiness, nothing scarier than you might not get that special gift from Santa Claus. Agree?

WRONG! People in olden days of yore didn’t stay indoors due to the “frightful” weather, but more because it might have been dangerous outside. They knew in their hearts that dark forces lurked amidst the shadows of the snow drifts. Winter Solstice (December 21) was seen as a time when the fabric between the mortal world and the world of malicious spirits became thin enough for things to snatch unwary victims. Though the fiends abound all year, still, this time proved to be the scariest. When many gathered together to celebrate, it was hoped that the dark spirits would realize with all that din that there were too many bodies inside or caroling outside to snatch a victim. Ghosts and Christmas.

Another custom practiced had doors flung open at midnight to let out trapped evil spirits caught inside the building. A candle left burning in the window all night insured good luck for the family inside. Any candle that burned out before dawn though, was considered a bad sign. 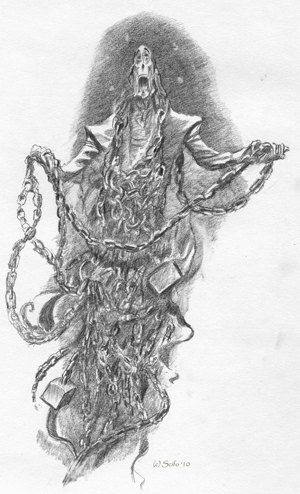 Those born on Christmas are apt more to see a spirit than those born any other day of the year. But they have nothing to fear from any ghost if they chance to encounter one. They are also protected against deaths by drowning or hanging.

Witches are a part of Christmas too—through our very own Christmas ornaments, or balls. In Scotland, people used to wear them around their necks to ward off witches. It was also believed in Scotland and Canada that if a witch touched one, her/his soul would be caught within the ball forever.

A witch ball is a hollow sphere of plain or stained glass hung in cottage windows in eighteenth-century England. The balls warded off evil spirits, witch’s spells, or ill fortune, though the witch’s ball actually originated among cultures where witches are considered a blessing. Witches would usually “enchant” the balls to enhance their potency against evils. Later, they were often posted on top of a vase or suspended by a cord (as from the mantelpiece or rafters) for a decorative effect. Witch balls appeared in America in the nineteenth century and often found in gardens under the name “gazing ball.” However, “gazing balls” contain no strands within their interior. According to folk tales, witch balls would entice evil spirits with their bright colors; the strands inside would then capture the spirit and prevent it from escaping. The gazing balls found in many of today’s gardens derived from silvered witch balls that acted as convex mirrors, warding off evil by reflecting it away. (Interesting tradition that has nothing to do with Christmas, but is also used to capture spirits, are the bottle trees. A tradition done in the South, it originated in Africa and was brought over to America with the captured slaves.) 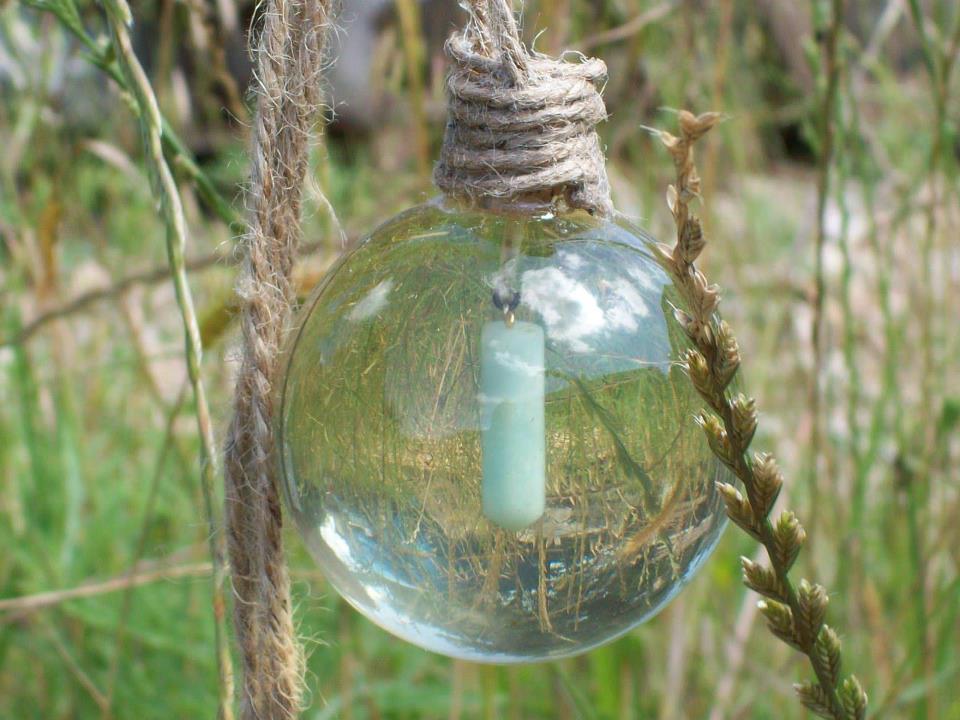 Witch balls sometimes measure as large as seven inches (eighteen cm) in diameter. By tradition, but not always, the witch ball is green or blue in color and made from glass. There have been others made of wood, grass, or twigs, instead of glass. Some are decorated in enameled swirls and brilliant stripes of various colors.

Because they look similar to the glass balls used on fishing nets, witch balls are often associated with sea superstitions and legends. The modern Christmas ornament ball is descended from the witch ball. According to an ancient tale, the ornament was originally placed on the tree to dispel a visitor’s envy at the presents left beneath the tree.

Besides the ball, mistletoe was also considered a powerful charm to be used against witches, along with lightening. Was the lightening caused by a witch? Good question, but nothing I could find to connect the two. Only the mistletoe. 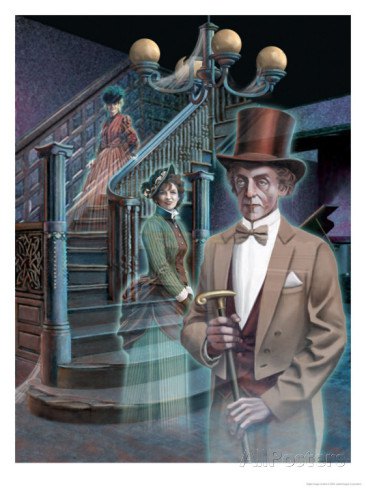 Ghost stories are also told at this time of the year. Mainly during the Victorian times, though I suspect it goes as far back to medieval times. Charles Dickens ’ novel, the Christmas Carol, is proof of that. Victorian people did more than go Christmas caroling or drink mulled wine by the roaring fires. There’s even that line in “It’s the Most Wonderful Time of the Year” song that goes “There’ll be scary ghost stories and tales of the glories of Christmas long, long ago.”

Besides ghost stories, there are other dark myths and legends to do with Christmas. In the olden days gone by in Finland, they believed in the Joulupukki. The word means yule buck. Pagan people used to have festivities to ward off evil spirits. In Finland these spirits of darkness wore goat skins and horns. In the beginning, this creature didn’t give presents. Instead, it demanded them. The Christmas Goat was an ugly creature and frightened children. It is unclear how this personality was transformed into the benevolent Father Christmas. Nowadays the only remaining feature is the name. The process was probably a continuous amalgamation of many old folk customs and beliefs from varied sources. One can speak of a Christmas pageant tradition consisting of many personages with roles partly Christian, partly pagan: A white-bearded saint, the Devil, demons, and house gnomes. Nowadays, the Joulupukki of Finland resembles the American Santa Claus. 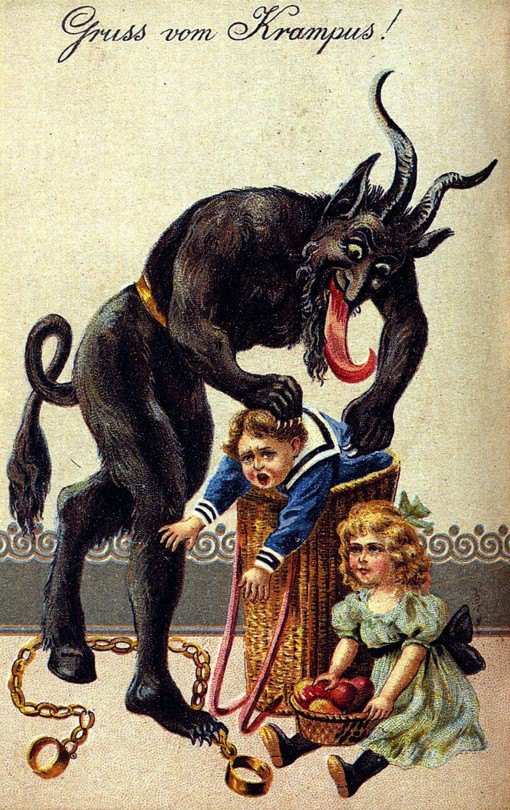 There is Black Peter and the Krampus, both called Santa’s “evil twin.” In many areas of the world, it is said that St. Nicholas has a companion. This companion is Krampus, though another version is Black Peter, or Zarte Piet or Zwarte Piet. Black Peter is associated with the Netherlands and has dark skin. Krampus isn’t a man though. Born of a pre-Christian, Alpine Pagan tradition, he is identified by matted-black hair, along tongue that snakes out of his maw, and cloven hooves. Just like a demon. His job is to accompany St. Nicholas and to warn and punish bad children. He is said to carry a basket on his back where he will place the bad children and take them to Hell to be tossed into the pit. After a beating from a thorny, unbreakable birch stick kept in the basket until needed. This puts a frightening twist on “have you been naughty or nice!” Krampus originates from Krampen–meaning claw. He is said to be the son of Hel in Norse mythology and is the dark companion of St. Nicholas, the traditional European winter gift-bringer. According to folklore, Krampus purportedly shows up in towns the night before December 6, known as Krampusnacht, or Krampus Night. December 6 also happens to be Nikolaustag, or St. Nicholas Day, when German children look outside their door to see if the shoe or boot they’d left out the night before contains either presents (a reward for good behavior) or a rod and a trip to Hell (bad behavior).

Krampus is making a comeback now, due to the “bah, humbug” attitude in pop culture. Krampus walks are held on December 6th. It seems you can’t keep a good, er, bad, Krampus down.

Besides a season of “good tidings,” it is also a time of terrible fear. Make sure your children are in at night and that they stay good. Do the same for yourself. For you never know if that shadow moving along the street that stops at your front yard is just someone looking at your Christmas lights, or something else waiting to get you! 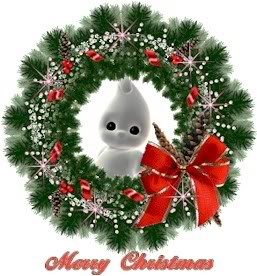