Beware of Crawford Road in Yorktown.

Williamsburg isn’t the only place with ghost tours and scary stories. Williamsburg’s neighbor, Yorktown, has an infamous road known to put fear into the hearts of locals. Crawford Road in Yorktown, Virginia has made headlines.

You would think it’s because the road features a jaw-dropping, beautifully elaborated landscape, or because it has an astounding historical architecture.

But no. Apparently, Crawford Road is extremely haunted.

Some go out of their way to avoid the route. Many do not dare take the road at night. The best part? Driving under the bridge.

Driving Down Under That Old, Creepy Bridge 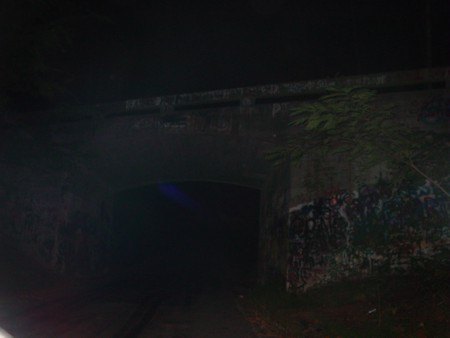 One of the stories tells of a group of friends that were cruising late at night until they decided to turn up the fun by going down Crawford Road. While driving down the road, they joked, laughed, and sang songs from their brand new CD.

Everything had been fine until they reached the bridge. They never saw it coming.

All of a sudden, the track they were listening to on the CD lead out a high-pitched, obnoxious shrieking sound. The noise lasted for about 10 seconds until they were far enough from the bridge. Then the noise stopped and the CD played as normal.

If that’s not freaky enough, the noise is apparently still embedded on the CD, and the noise is still heard on it when played.

The group of friends have not returned to the bridge.

A second and probably chillier story tells of a group of friends who were driving down the road late at night. Similar to the first account, everything had been fine until they went under the bridge.

While driving, they felt as though they’d ran something over. They got out of the car to check but nothing was there. Startled, they got back in and proceeded. All of a sudden, the windows in the car began to fog up, and handprints could be seen making their way up their window from the outside.

Shocked and confused they had no other alternative but to keep driving. Soon, they began to hear thuds around the car.

After the thudding finally stopped, they heard a smearing sound at the back window. Whatever it was began to slide down until it fell off and hit the road.

They got out and checked to see what it was, but nothing was there.

The Wedding that Went Wrong

Probably one of the most popular accounts surrounding Crawford Road is the wedding story. Countless tell the same plot.

Years ago, a wedding took place near the area. But most agree she was not a happy bride, and to escape her undesired fate, she hung herself from the bridge at Crawford Road.

Her hanging body can still be seen hanging from the bridge by a select unlucky few who happen to be at the bridge at the right time.

One day, a woman was driving by Crawford Road. As she was beginning to pass under the bridge she noticed a lady, dressed in a white gown, standing at the top of the bridge looking down at her.

After she drove below the bridge, something moved her to look back.

That’s where she saw the lady in white, walking onto the ledge and jumping off. But the apparition didn’t hit the ground.

The lady had stopped in mid-air, swaying, as if she was hanging by a noose.

Several accounts report a connection between the area and the KKK.

Some believe that KKK members still gather at the bridge for lynches and secret meetings. If this is true, it means that Crawford Road’s bridge is responsible for hundreds of deaths. This coincides with numerous stories that report seeing black apparitions hung in rows by the bridge. Similar to the wedding account, the apparitions can be seen hanging from the bridge in mid-air and swaying, as if hung by a noose.

Hundreds of accounts report unending car accidents by the bridge at Crawford Road.

A story tells of a man who drove under the bridge when his car completely shut off. The car’s battery had died completely and he had to be towed out. Because of the many deaths surrounding the bridge, multiple drivers report seeing apparitions standing isolated in the middle of the road. This causes many to swerve off in fear. Some stories end well, others end with the driver meeting a sudden and tragic death.

It has been reported that if you travel down the road in the daylight, many skid marks are visible scattered about the road. Car parts and gears can be seen on either side of the road abandoned from the multiple accidents.

The Abandoned Building off the Road

The chilling road is guarded by fences on either side.  Beyond the fence lies vast woods and allegedly an abandoned house with no doors.

Reports claim that if you look inside the solitary building, red eyes may appear in one of the open doorways. People say they can usually spot them coming from the door all the way down to the far right.

They say these eyes “watch” you as you move around, though if you get close they vanish before you. Several accounts report that when you come inside, there is an eerie feeling in the atmosphere as if more than one “being” is watching you.

On film, apparitions have been caught walking back and forth along the walls, with no respect for the laws of physics.

Finally, people have reported hearing voices whispering inside the house, feet being randomly stepped on, and hands lain spontaneously upon their backs. The apparitions, they say, can be seen best during a moonless night. “I was driving down Crawford Road one night, this was in the 90s, and I saw this strange fog just below the bridge suspended, and it looked like it took the form of a person”, reported local resident of Williamsburg.

So next time you visit Yorktown, Virginia. Beware of Crawford Road. If you join us for a ghost tour and decide to make a solitary trip to a haunted place, make it Crawford Bridge in the middle of the night. Take some photos, and share them with us. The old road is responsible for countless deaths and still haunts the living.