It’s easy to miss, but history surrounds us every day. This is especially true in Williamsburg, Virginia. A great way to experience this history is through the Colonial Williamsburg taverns and inns. The authenticity brings tourists face to face with colonial personalities, places, and historical events.

Inns and taverns could be found throughout Williamsburg and were an important part of the eighteenth-century culture. Not only were they used for lodgings, but various people used them as stores to sell products. They were also popular places for social gatherings.

Taverns usually consisted of public and private rooms. The private rooms allowed gentlemen of high status to converse freely. At these gatherings, there was plenty of smoking, drinking, and gambling.

The public rooms provided meals and drinks set at a price established by the courts. The tavern served meals at a fixed time and usually consisted of a smaller fare than the private rooms.

Owning a tavern was a tricky business that often forced the tavern keeper to break the law and the ownership often ended in failure. To be a tavern keeper, you had to have a sharp business sense and understand how to obtain profit. You also had to get a license from the court. Several factors were considered before a license was approved; 1) the financial status of the individual, 2) the tavern’s location, and 3) its distance from already established taverns and inns.

Despite the struggles, running a tavern was a good way to earn a living. Williamsburg was the political and social center of the colony at the time. Therefore, running a tavern in the town turned up a favorable profit and provided a steadier income than agriculture, or any other labor would have.

Today, a lot of the taverns in Williamsburg are historical landmarks. Some have burned down and were rebuilt while others are lost. If you’re curious about some of America’s oldest taverns, read on to find out more about these interesting and historic buildings.

One of the most memorable taverns in Williamsburg is Chowning’s Tavern. During its first ten years, the tavern saw many owners. In 1739, William Shields sold the property to John Blair and Blair sold it to James Bird. Bird owned it for a brief time, but because of his failure to pay he lost the property. The property was then subdivided between Graham Frank and Haldenby Dixon. Dixon was a merchant and used the property to create his own store. 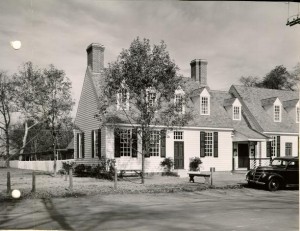 Because of the Civil War, after 1779, the history and ownership of the building is mostly lost. What is known is that in September, Frank and Dixon tried to renew the lease, only to have it denied.

In later years, Dr. Samuel Griffin renamed the building as the Colonial Hotel as well as the house east of it. The new building became a gathering place for the Courthouse crowd. This set included solicitors, litigants, and barristers. It was also a rendezvous for travelers, tobacco farmers, fishermen, and the locals.

Reopening of the Tavern

Because Chowning’s Tavern didn’t exist anymore, ideas about rebuilding the tavern on a new site emerged. The designers decided that it should resemble an authentic, eighteenth-century colonial Williamsburg tavern.

They were able to produce this look by gathering photographs, drawings, and written descriptions of travelers. The tavern would resemble the original establishment and integrate characteristics of other old century taverns.

Characteristically, an old tavern was domestic in its appearance with booths, tables, and benches along the wall. The West unit was usually used as a dining parlor. The East unit usually served as a bar room and was sometimes used as a warehouse, shop, or storehouse.

Signs were another interesting feature of taverns. This was as true of Virginia in colonial days as it was in England. In fact, it was regulation in some places.

Because of this, the designers placed a portrait of a customer extracting a cork from a bottle opposite the tavern entrance.

Also, what tavern would be complete without beer? Featured beverages include stout rum drinks, a variety of ales and Virginia wines.

The Market Square in Williamsburg had become the town trading center. Merchants from all over the place sold their goods in this part of town. As a result, people petitioned to have a tavern close to the rapidly growing area. In 1749, the historic Market Square Tavern was established. The tavern had many owners and went through many repairs before it burned down.

The next person to run the tavern was a merchant named Robert Lyon. During his time as tavern owner, Thomas Jefferson was studying at William and Mary and often stayed at the tavern during his college years. 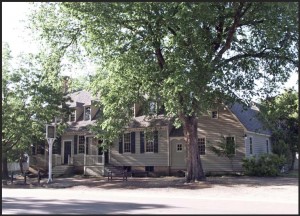 Thomas Craig owned the tavern for ten years and then sold it to Gabriel Maupin. Maupin owned the tavern during the Revolutionary War. This was difficult because his horses were constantly stolen by soldiers.

The tavern survived the Revolutionary War and in 1792 and 1793, Maupin made improvements to it. Then, in 1802, Maupin sold the tavern to a French-American named Peter Rob Deneufville. Deneufville was the last owner of the original tavern.

Sadly, in 1842 a disastrous fire damaged much of the tavern along with many of the other surrounding buildings. The damage was so severe that the building was practically rebuilt. When it reopened, it was named after the Raleigh Tavern and became the Raleigh Hotel.

The tavern is an important part of Williamsburg’s history and still stands today. It’s one of eighty-eight original buildings still around and it’s open to guests who wish to experience an authentic colonial-era atmosphere.

An interesting fact about the tavern is that guests have reported seeing some strange things.

Next to the tavern was the Greek Revival Church which saw many horrors during the Civil War, including amputations and burials of the dead. Guests have reported seeing ghosts of wounded soldiers roaming the grounds and have heard tapping from inside the walls. So if you’re a fan of the supernatural, this historic tavern is worth checking out.

The historic Raleigh Tavern, established in 1717, was named after its founder, Sir Walter Raleigh. Throughout its years, the tavern was the site of slave auctions and was used to sell theater tickets and merchandise. The tavern also played host to many balls, historic events, and many influential people.

Many famous guests frequented the tavern. Thomas Jefferson, in addition to the Market Square Tavern, regularly attended balls held at the Raleigh in the late 1700’s. In 1768, the Governor ate at the Raleigh during his first night in the city. Seven years later, Peyton Randolph (President of the Continental Congress) returned from Philadelphia. The Raleigh played host to celebrating his return. Also, George Washington, along with many other influential Virginians, often dined at the Raleigh. 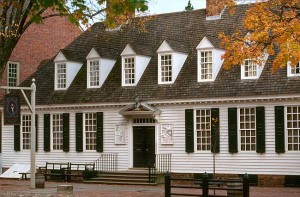 Many historic events took place at the tavern. A very famous political group known as the Burgesses often met at the Raleigh. In 1769, the Governor dissolved the chamber for its disrespect. Members responded by reconvening at the tavern. There they decided to suspend the purchase of various goods from the British. In 1773, Thomas Jefferson, Patrick Henry, Francis Lightfoot Lee, and Dabney Carrhey formed the Committee of Correspondence (an important step towards Continental unity) at the Raleigh. Finally, On May 27, 1774, as a result of the Governor dissolving the House of Burgesses, eighty-nine members reassembled at the Raleigh to form another association. This union became known as the Continental Association.

The tavern also played host to the founding of two organizations that are still around today. On December 5, 1776, William and Mary students gathered in the Apollo Room and founded Phi Beta Kappa. Also, in 1779 another group of gentlemen met at the Raleigh and formed the Pulaski Club, one of the oldest social organizations in the nation.

The last notable Raleigh Tavern banquet was in 1858 when former President John Tyler and other College of William and Mary alumni gathered. A year later, the original tavern burned down on December 16, 1859, and wasn’t rebuilt. In order to preserve the tavern’s name and fame, the rebuilt Market Square tavern was named the Raleigh Hotel.

At the time, Shield’s Tavern‘s location was ideal. Gloucester street was the main street that connected the Capitol with part of William and Mary. The original owners of Shield’s Tavern were Richard Bland, James Shields I, and William Robertson. The Shields family stayed the longest; three generations ran the tavern. Bland sold his lots (lots 20 and 21) to Colonel Nathaniel Harrison and Robertson sold his lot (lot 26) to a man named Brown. 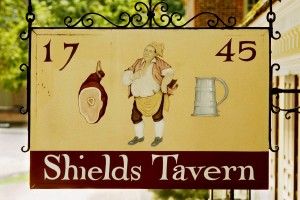 James Shield’s daughter kept the tavern until she married a man named Henry Wetherburn in July 1751. In 1752, Wetherburn advertised the tavern for rent and it was then used for other services.

A number of tavern keepers owned the property throughout the years. One of the buyers, Jane Vobe, opened up a tavern called the Kings Arms located right next to Shield’s Tavern. The new tavern was fairly large and remains close to Shields to this day.

Other landlords included James Tarpley, John Carter, Edward Charlton, (merchants, barbers, wig makers, etc.,). The various lots were constantly changing hands and tenants came and went. A lot of construction was done on the property as well. Owners added buildings and alterations to yards and work spaces. In the mid-1800’s, the tavern burned down and wasn’t reconstructed until 1989.

Shields is open Tuesday through Saturday between the hours of 11:30 a.m. and 5 p.m.

These taverns offer so much rich and interesting history. They were a very large part of colonial life. Many famous people frequented them and many historical events took place in them. They were institutions that entertained and provided a good living for a man and his family. It’s unfortunate that some of the great ones like the Market Square Tavern and the Raleigh Tavern burned down. However, there are still some amazing ones left for people in the modern age to experience and appreciate.