Building which stored arms and ammo was pivotal in shaping the American Revolution. 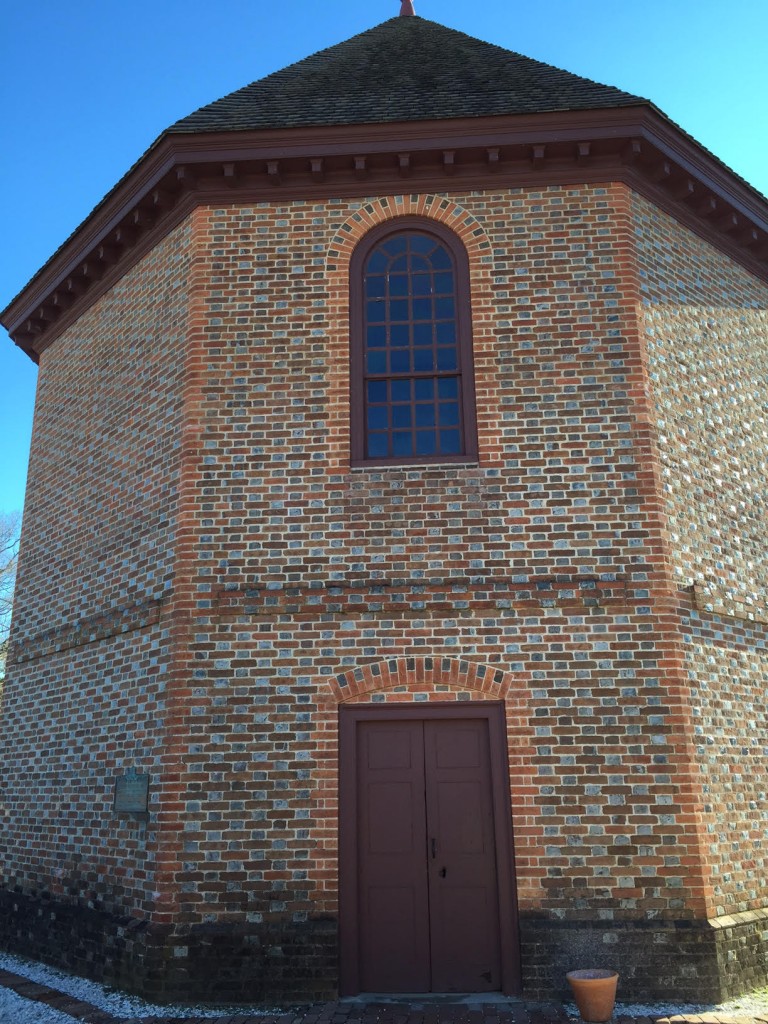 Williamsburg was the capital of Virginia from 1699 to 1780. During this period, Alexander Spotswood served as the colony’s Lieutenant Governor. Spotswood’s military background and popularity among English politicians helped him land this important role. His responsibilities included assisting both the legislative and executive branches. One of his most important architecturalcontributions to the colony was the Public Magazine.

Now before the great American Revolution, Virginia and London were on friendly terms. England’s Queen Anne would often send the colony arms and ammunitions, such that it could protect itself from Native American tribes, pirate crews, and other hostile forces. In the beginning, most communities stored these dangerous gifts in barn cellars and meetinghouse attics. This made it nearly impossible to keep track of total inventory, and also resulted in frequent accidents. In 16091, the famous explorer John Smith was badly burned when a rogue spark ignited his powder keg, for instance. Powder kegs were large barrels in which gunpowder was stored.

Another frightful incident happened in April 1645. The house of a colonist named John Johnson caught on fire. Unfortunately, Johnson had seventeen barrels of gunpowder stored at the property. The resulting explosion “shook the houses in Boston and Cambridge, so as men thought it had been an earthquake.”2

Therefore, “on April 30, 1713,”3 the great Lieutenant Governor Spotswood proposed the idea of keeping all of the colony’s arms and ammo in once place.  On December 24, 1714, The Virginia General Assembly authorized him to build a magazine. Colonial magazines were buildings designed specifically to store and guard weapons and explosives. Spotswood’s Magazine, also called “The Powder Horn”, was completed in 1715.

Obviously, one of the main responsibilities of colonial magazines was to make sure that weaponry – such as muskets, long rifles, bayonets, swords, pistols and axes – stayed out of the wrong hands. This included the tiny hands of children. Many gun accidents during the colonial times were caused by kids playing with guns, without their parents’ supervision. In his book Armed America, Clayton E. Cramer4 mentions stories of children accidentally shooting siblings (or themselves). By taking firearms out of homes, the Public Magazine put many a parent’s mind at ease.

But magazines were also important because they kept highly combustible explosives, like gunpowder, dry and away from accidental sparks. Gunpowder is a black, chemical explosive made from “a mixture of sulfur, charcoal, and potassium nitrate.”5 It is basically what propels a bullet from a firearm. Given the dangers of this chemical substance, colonists needed a safe way to carry it around. They would typically store small amounts of it in a powder flask or powder horn. Exhibitions held at the Public Magazine often included a nice collection of both types of containers, many of which are elaborately decorated.

During colonial times, Virginians had several types of firearms at their disposal. Among the earliest were muskets, which were typically used by infantrymen. Muskets were loaded from the muzzle, or the open end of the barrel. A lighter version of the musket was known as the caliver.

Loading and firing the musket was a tedious process6. A colonist had to first measure out the right amount of gunpowder. If a gun was filled with too little of the explosive, it could explode in his hands!

Next, a lead musket ball was rammed down the musket’s muzzle, followed by some wadding, to make sure everything stayed in place. A bit of gunpowder was then sprinkled onto the priming pan. The priming pan is connected to the “frizzen”, which is a small, L-shaped piece of steel located right in front of the hammer. The hammer is what holds the flint. When a piece of flint is struck against the metal frizzen, this produces sparks. These sparks ignite the powder in the priming pan, which, in turn, is what propels the bullet through the barrel.

By the time the Public Magazine was completed, muskets had adopted the flintlock firing system. Unlike its predecessor, the snaphance, a flintlock gun combined the frizzen and priming pan into one loading unit. This made it “possible to load a pistol beforehand and still have it go off reliably later.”7

“Possession of powder was the possession of power.”8 Thus, Spotswood was highly involved in the design of the Public Magazine. He designed it in the shape of an octagon and made it out of brick. He also gave it two floors, a peaked roof, and a tiny attic. There was thus plenty of space to house all of the colony’s arms and munitions. The gunpowder room, along with the armory and gunsmith shop, was located on the first floor. The Public Magazine’s second floor and attic were mostly likely used for miscellaneous storage.

The Colonial Williamsburg Magazine is located in the heart of Williamsburg. It has a height of sixty feet and a width of thirty-three feet and five inches. Its walls are approximately “two feet thick”9, and it is surrounded by a sturdy wooden fence. In 1755, two important additions were made in order to up security: a ten-foot tall perimeter wall and a guardhouse.

That same year, Lord Dunmore, Virginia’s royal governor at the time, told British troops to seize the Magazine’s stock of gunpowder. This incident, often referred to as the “Gunpowder Affair,” is said to be what precipitated the great American revolution.

By the mid-1700s, the relationship between Virginia and England was very tense. Colonists began to organize and form their own militias. Sensing their unrest, Lord Dunmore moved quickly to inhibit their access to arms and ammo. In a letter sent to Lord Dartmouth (the Secretary of State) on May 1775, Dunmore writes:

“[…] their having come to a resolution of raising a body of armed Men in all counties, made me think it prudent remove some Gunpowder which was in a Magazine in this place […]”10

Dunmore’s “some Gunpowder” totaled fifteen half barrels, which were confiscated by a team of Royal Navy sailors on April 21, 1775. When colonists confronted Lord Dunmore on the powder’s disappearance, he told them that he’d removed it in order to keep it safe from runaway slaves. He assured them that he would return it promptly as soon as the colonists needed it. Of course, he never did.

When the American Revolutionary War ended in 1783, the Magazine began to be used for other things. In 1797, colonists turned it into a marketplace, for instance. During the 1850s, the building’s second floor was used as a meeting place for Baptist church members. It also briefly served as a dancing school and horse stable.

On February 6, 1888, the protective wall surrounding the Magazine began to fall apart. A vigilant local named Cynthia Beverley Tucker Coleman took it upon herself to rescue the structure. She formed The Association of the Preservation of Virginia Antiquities along the way. This non-profit acquired the building for $400 in 1890 and would later transform it into a museum.

During the 1930s, the APVA worked closely with Colonial Williamsburg to restore the Magazine to how it appeared in the 1700s. The building opened “for exhibition on July 4, 1949”11 and is currently owned by the city of Williamsburg.